Will Donald Trump turn the White House into his fantasy harem? Why not — he already did that with his business

Trump built his business around judging, marketing and leering at women. How would he approach the presidency? 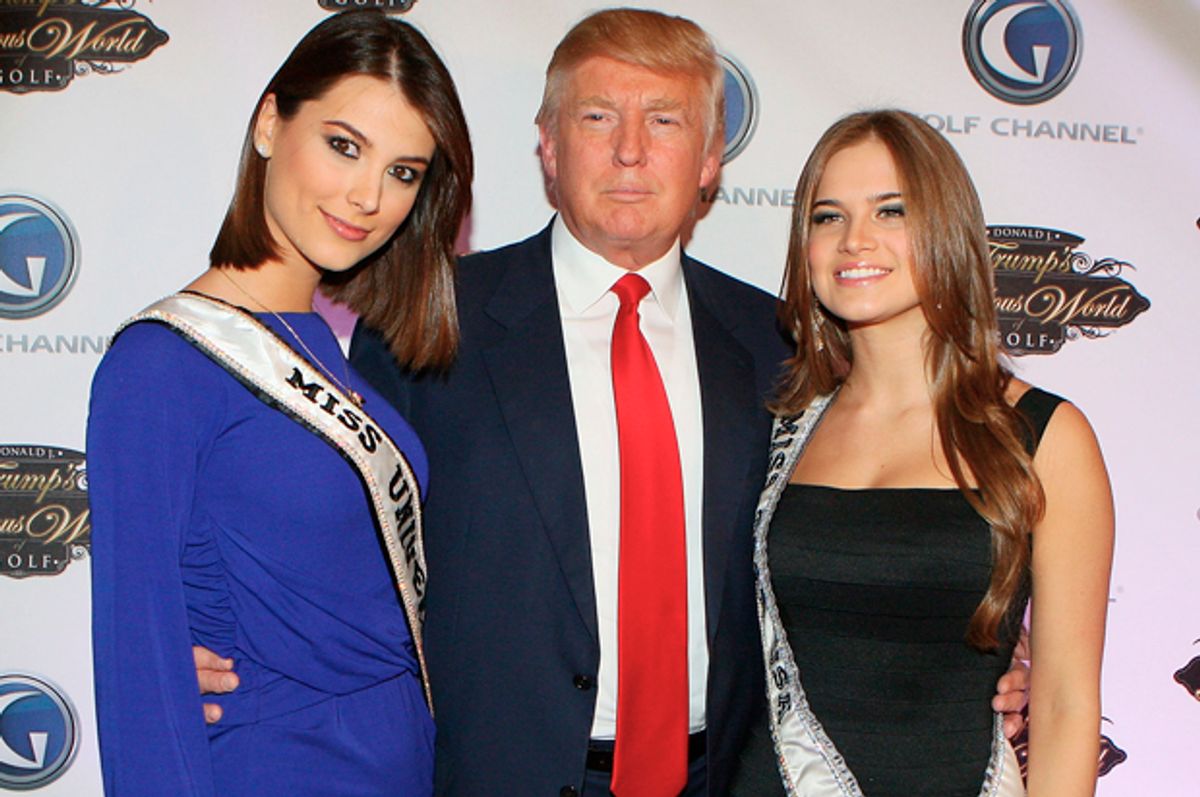 In the past year and a half, a lot of ink has been spilled about Donald Trump's problem with women: his misogyny, the way he evaluates all women (even his daughter) primarily by their fuckability, his shaming  women for their body functions, and, of course, his bragging about sexually assaulting women with the immediately infamous phrase "grab them by the pussy."

After all this, it's understandable if outrage fatigue sets in. But beyond the basic concerns about Trump's moral character lies another, less explored concern — that his pattern of behavior around women suggests that Trump cannot control himself. His need to humiliate and objectify women shows every sign of being a compulsive behavior. Whether he acts this way because he can't help it or because he doesn't want to hardly matters.

Trump has filed for bankruptcy six times. But despite his dismal track record, Trump often treats his business less like an actual enterprise and more like an elaborate and expensive opportunity to gain access to women so he can treat them like property.

In October a couple of uglier examples surfaced, though they received very little media coverage, likely due to the aforementioned outrage fatigue.

Last week, The Huffington Post published a disturbing video that displays Trump's need to not just be around beautiful women but to be seen as owning and controlling them. In this 2011 video, Trump hauls Jennifer Hawkins — whom he calls "my Jennifer" — onstage at an event in Sydney and accuses her of deliberately ducking an event where she was supposed to introduce him.

Hawkins denies the accusations, saying that it was due to a "miscommunication." This doesn't matter to Trump, whose mission is to display his control over this woman, which he does by calling her "not very bright," making a gross orgasm joke about her and then capping it off by forcing a kiss on her. (Hawkins deftly dodges, so the kiss lands on her cheek.)

"Can I sit down now?" Hawkins asks. Apparently satisfied that he has showed his power over this woman, Trump allows it.

Two weeks ago, Slate published a letter discovered by University of Iowa professor Travis Vogan while doing unrelated research, showing that in 1993 Trump pitched ABC on a show he wanted to call "Donald Trump Presents the Most Beautiful Women in the World."

"This show will consist of a series of shorts and interviews with ten of the most beautiful women in the world, including Lady Di (who I know and I think will speak to me), Claudia Schiffer, Linda Evangelista, Christy Turlington, Michelle Pfeiffer, etc.," Trump wrote.

Remember, this was right on the heels of two of Trump's biggest business failures. He declared a bankruptcy for the Trump Taj Mahal in 1991 and the Trump Plaza Hotel in 1992, that ended up in debt $3 billion and $550 million, respectively.

But those abject failures did nothing to convince Trump to rearrange his business priorities to focus more on business and less on women's bodies. Instead, his compulsive need to be seen herding beautiful women around like a second-rate Hugh Hefner kicked in, and he was pitching this unbearably dumb idea to ABC.

Trump likes to comment on the appearance of pretty much any woman he sees, no matter how inappropriate this is, which is why he commented on the shape of Hillary Clinton's rear after a debate and allegedly told a pregnant Barbara Corcoran during a business meeting in the 1990s that her breast size was comparable to his wife's.

So it's no wonder that he's obsessed with creating business-related reasons to engage with models, cheerleaders or beauty pageant contestants, where there's a widespread perception that it's more acceptable to talk about their bodies, humiliate them with belittling sexual inuendo and engage in other behaviors that border on sexual harassment or sexual assault.

The examples are too numerous to list exhaustively, but here's a sample: Trump used his ownership of beauty pageants as cover to walk in on contestants, even underage girls, while they were dressing. He bought a modeling agency, and former employees allege he treated the models like slaves — charging them to work, skirting immigration law and objectifying the women far beyond what they experienced at other jobs.

Trump bought into the United States Football League, a short-lived 1980s competitor to the National Football League and compelled his New Jersey Generals team to add cheerleaders in skimpy outfits. He allegedly treated those women much as he did the models: underpaying them, making them do work they found degrading and giving them promises that were never fulfilled.

On his hit reality show "The Apprentice," Trump displayed the same belief that he was entitled to treat female contestants as his personal property, commenting on their looks and bodies as if they were racehorses he had purchased.

On camera, he told one woman that it must be a "pretty picture" to see her on her knees. After interviewing more than 20 employees of the show, including contestants, the AP reported that Trump "repeatedly demeaned" women, talking about their breasts and evaluating whether he would have sex with them.

Remember, this show was supposed to be a contest about people's management abilities and entrepreneurial skills. Trump couldn't help but turn it into a venue for asserting his ownership over women's bodies.

(No doubt the producers of "The Apprentice" hired Trump because of his compulsive creepiness, which is terrible to endure in person but certainly makes for compelling television. It's not like they hired him for his business acumen, after all.)

These women — cheerleaders, models, TV personalities — are doing jobs where looking good is part of the job description. Some people might think that means that enduring invasive comments, leering, inappropriate touching and other forms of harassment comes with the job in a way that it doesn't for, say, a mail clerk. But that's not true at all.

“Women who are working in jobs like acting and modeling have the same sorts of protection against sexual harassment as women in other jobs," Emily Martin, the vice president for the workplace justice division of the National Women's Law Center, explained by phone.

The law center is a nonpartisan organization, so Martin couldn't speak specifically about the allegations against Donald Trump or the current presidential campaign, but she was able to offer broader explanations about these issues.

If looking good is part of your job description, Martin explained, your employer has certain rights to offer job-related criticisms of your appearance. But she added, "I don’t think it’s the case that if your job is looking attractive, that there’s a higher bar in demonstrating hostile environment [or] sexual harassment."

Grabbing, sexual comments and other forms of harassment that contribute to a hostile work environment are wrong, whether you're a secretary at a real estate firm or a contestant on "The Apprentice." But it seems as if Trump has been drawn toward the entertainment and beauty industries, in large part, because of his sense that he can treat the women who work in these industries like toys, instead of as real employees with rights.

His obsession with women as objects and women's physical appearance as a commodity is striking for a man who is supposedly a genius businessman. Most competent businesspeople would delegate work like hiring models and worrying about who has what measurements. They have more important things to do with their time. But not Trump, who likes to do those tasks and has a history of making time in his schedule to ogle women, rather than attending to some of the higher-level duties of a company president.

According to Jill Harth and George Houraney, a couple who worked with Trump in the 1990s on a pageant called American Dream Calendar Girls, Trump took a very hands-on role in any work that involved evaluating the bodies of young women.

“Basically, he just wanted to make sure that the girls were up to his standards,” Harth said in a deposition, according to The Boston Globe. “He was always very interested in every phone call about who had the great bodies and who didn’t, who was more beautiful. He was always on the search for the most beautiful.”

Harth has also accused Trump of sexual assaulting her personally, by forcibly kissing her and pinning her down.

Trump has continually demonstrated this micromanagement style in any activity involving young female employees and judging their bodies by his exacting standards. He bragged about his involvement in minor details like swimsuit size and heel height for the Miss Universe pageant and personally signed models to his agency, even though there's no evidence he has any expertise in what makes someone successful in that profession.

Far from being a savvy businessman who makes prudent decisions for financial reasons, it looks more like Trump is a hopeless lech who uses his business as an opportunity to fulfill a darker fantasy of being able to treat hundreds of beautiful women as property.

He even involved his regular employees, hired to do jobs that have nothing to do with their looks, in this fantasy. In the 1990s, he reportedly tried to get Playboy to do a spread using Trump Organization employees as models, a move that suggests he sees even women who work in ordinary office jobs as part of a larger Trump harem. Luckily, his efforts failed.

All this matters. Why? This man has gotten perilously close to the White House. Having teams of bikini-clad women lined up so you can pass hot-or-not judgments is not traditionally part of the president's duties or powers. But it's an activity that clearly means more to Trump than picking federal judges or making Cabinet appointments.

Will Trump, if elected, try to reshape the presidency as he framed his business, so that it offers ample opportunities to treat unwilling women as members of a Trump harem? It's hard to imagine anyone doing that. But it's equally hard to imagine Trump going four whole years without indulging his uglier desires regarding women.