Ammon Bundy, leader of Oregon standoff: "We will continue to stand"

The conservative hero says he'll continue to fight the government 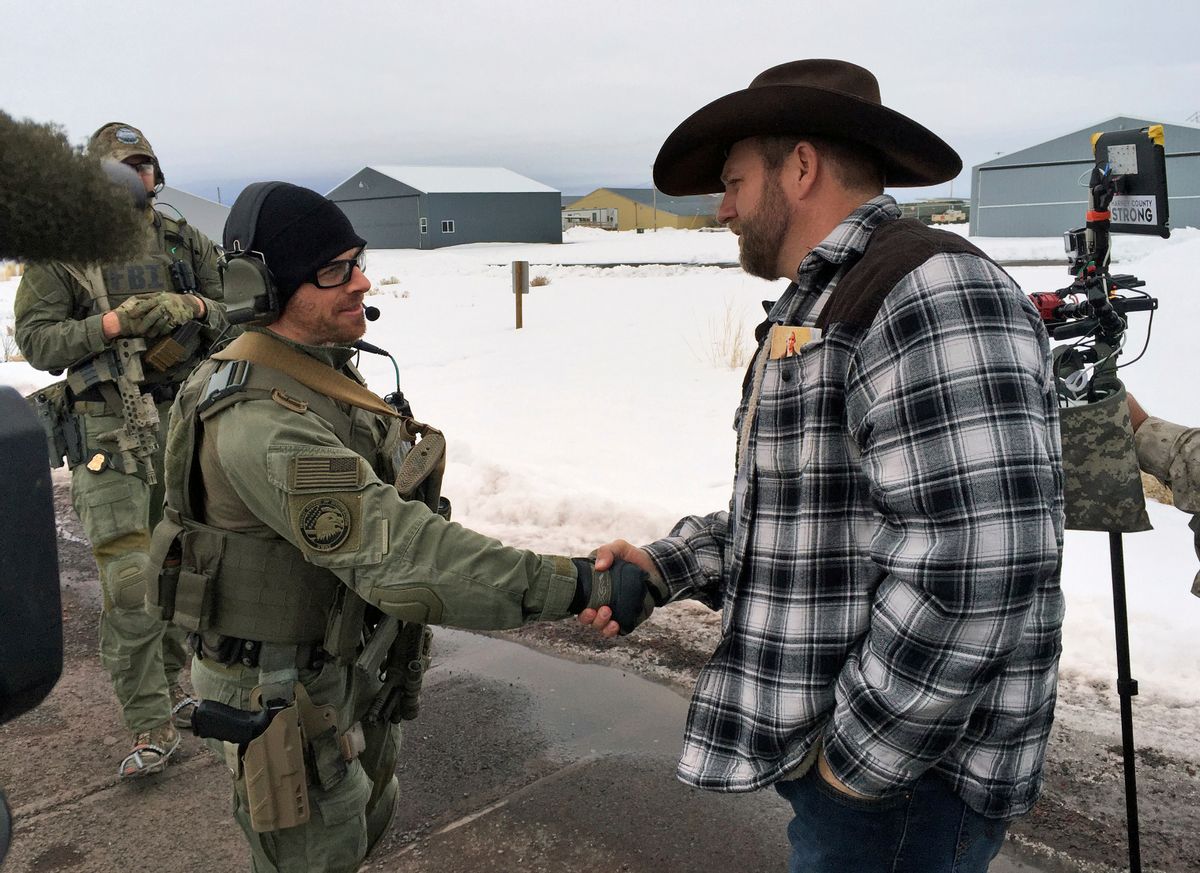 FILE - In this Jan. 22, 2016, file photo, Ammon Bundy, right, shakes hand with a federal agent guarding the gate at the Burns Municipal Airport in Burns, Ore. Bundy, the leader of a federal wildlife refuge takeover in Oregon says his group will "continue to stand" after he and six others were acquitted last week in Portland, Ore., of charges in the case. Bundy remains in jail because he still faces charges in the 2014 standoff at his father's Nevada ranch. (AP Photo/Keith Ridler, File) (AP)
--

PORTLAND, Ore. — The leader of a federal wildlife refuge takeover in Oregon said his group will "continue to stand" after he and six others were acquitted last week of charges in the case.

Ammon Bundy told The Oregonian/OregonLive in a phone call from the Multnomah County Detention Center on Monday that it was their duty to stand.

"We did it peacefully," Bundy said. "We did it legally, and the jury's verdicts confirmed that."

Bundy said the trial ended in "another example of the government not following the law" when U.S. marshals arrested his attorney for challenging the judge's order to keep him in custody.

Bundy remains in jail because he still faces charges in the 2014 standoff at his father's Nevada ranch. He said he had expected to be transferred to Nevada on Tuesday with brother Ryan Bundy, but U.S. marshals in Las Vegas would not comment about the move.

Ammon Bundy's attorney in Las Vegas, Daniel Hill, said he had no information about when the Bundy brothers would arrive.

But Hill said that once they do, he'll ask the court to release Ammon Bundy pending trial in February.

Ryan Bundy is serving as his own lawyer. Angela Dows, an attorney appointed by the court to advise him, declined to comment without his authorization.

Ammon Bundy said in Oregon that he wasn't allowed any contact with his brother on Halloween, Ryan Bundy's 44th birthday.

Bundy, 41, of Emmett, Idaho, testified that he proposed the armed takeover to draw attention to the case of two Oregon ranchers that he believes were unjustly imprisoned for setting fire to public land and to protest federal mismanagement of vast tracts of lands in the West.

He called for prosecutors to drop charges against other occupiers set for February trial on the same conspiracy charge.

Prosecutors have not said whether they will drop charges against the remaining defendants. Eleven people previously pleaded guilty to the conspiracy charge.

"There was no conspiracy," Bundy said. "It would be a waste of court time and resources."