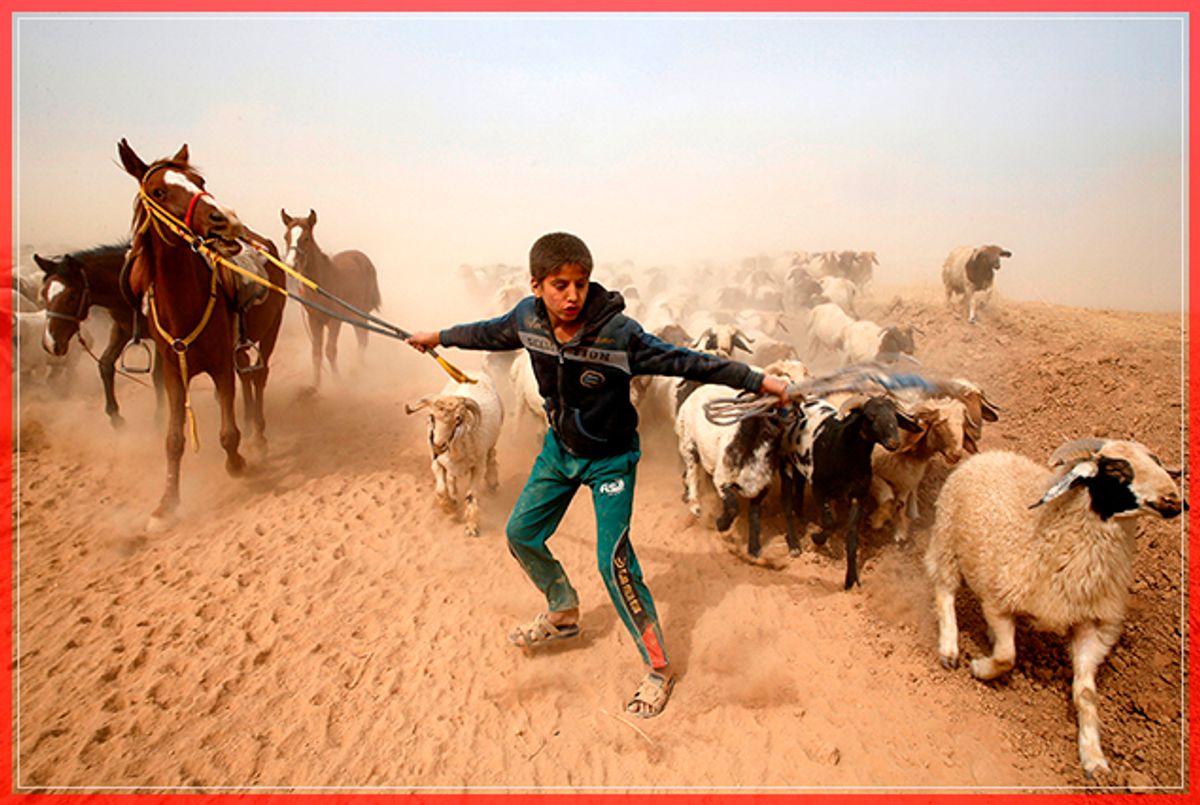 A displaced Iraqi boy leads his animals to safety after escaping from Islamic State controlled village of Abu Jarboa during clashes with IS militants near Mosul, Iraq November 1, 2016. REUTERS/Ahmed Jadallah TPX IMAGES OF THE DAY - RTX2RCHO (Reuters)
--

London, England   Daniel Leal-Olivas/Getty
A pensioner displays her numerous rings while participating in a protest to retain state pension This looks to me like a case where a photographer was sent to cover a political event, and there discovered an opportunity to capture something private and elegant amid the chaos. Kudos to Getty for including this image alongside the traditional signs and banners as coverage of the protest to demand the retention of state pension outside the Houses of Parliament.

Mosul, Iraq   Ahmed Jadallah/Reuters
A young boy leads his animals to safety after escaping his village of Abu Jarboa When I was a kid, I used to have breakfast in the kitchen. Overlooking a mostly dry creek and some tall trees, signaling the beginning of a forest, there was a tall fence. Every morning, the shepherd would lead his herd of sheep next to the river. And every morning the only one goat in the flock, would climb either a tree or the fence, and get its paws all tangled up, more than 10 feet high. Leaving the shepherd and his dog, hopelessly yelling and barking, until the goat had had its fun, and would magically make it to the ground.
I cannot possibly imagine, being a kid again but this time having to lead not one, but tens of goats (and a couple of horses at that)--oh and all while running to save my life from one the worst nightmares of the 21st century.

Cleveland, Ohio   Jamie Squire/Reuters
Outfielder Ben Zobrist scores a run after colliding with a Cleveland Indians catcher during the first inning of Game 6 of the World Series The NFL, also known as the No Fun League, has faced backlash from old school fans who believe new safety measures implemented in the game are destroying the product on the field. In baseball, the MLB introduced a rule that prevents baserunners from making contact with catchers trying to apply a tag out – unless it occurs during a so-called “bang-bang” play. Last night, the ump determined the play above constituted a bang-bang play, so the runner was safe, giving the Cubs an insurmountable lead early, forcing a game seven in the World Series. Yeah, we’re tired of photos featuring Donald Trump too. But this one’s going to burn! Each year, Britain’s Edenbridge Bonfire Society selecta public figure to set aflame as part of Bonfire Night, also known as Guy Fawkes Night, celebrated on Nov. 5 across the U.K. Organizers called Trump “the obvious choice” for this year’s 36-foot effigy: "We’re literally helping Trump to live out his own catchphrase, 'Burn it down' by exploding the effigy as the opening act for our fireworks display," a spokesperson told ABC News. Once Trump find out, we wonder if he’ll accuse the celebration of being rigged. Sad!