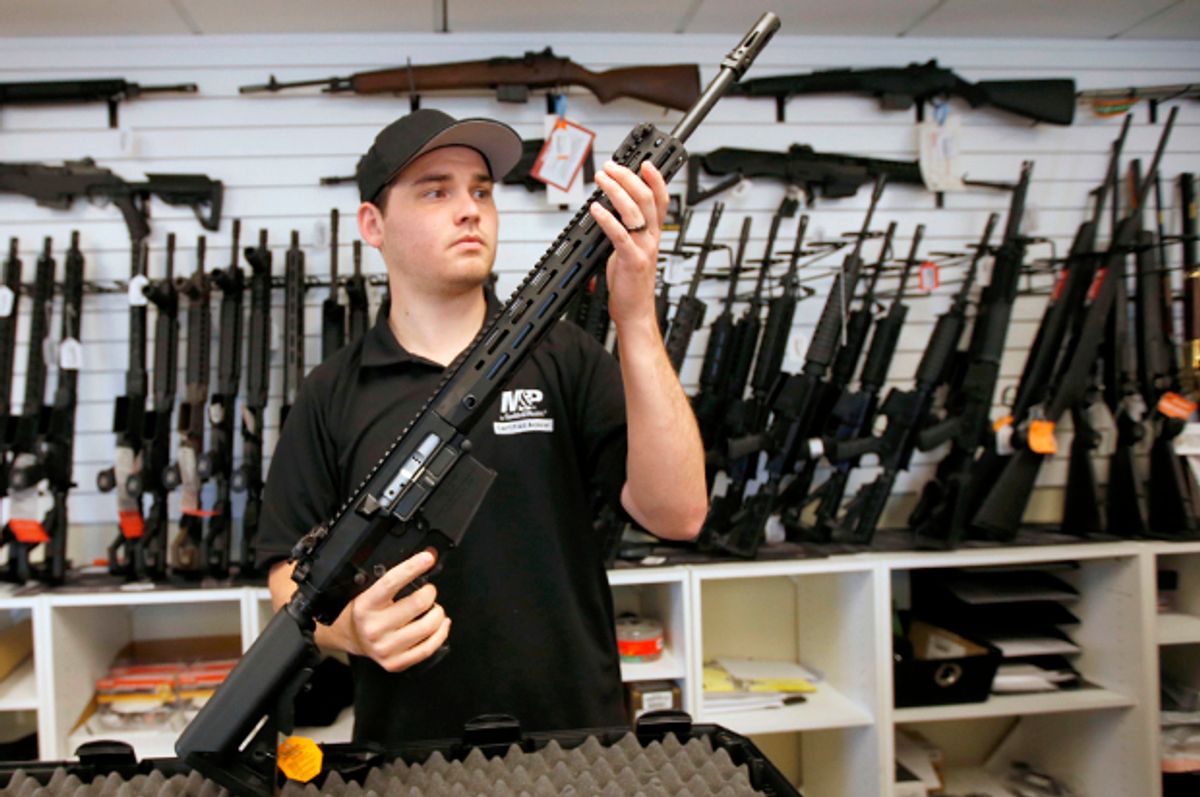 With just days left before American voters decide who will replace President Barack Obama, many in the nation’s gun-owning public seem to be preparing for a dystopian future of jackbooted liberal government thugs prying guns — as the popular slogan goes — from their cold dead hands.

“If you look back at what happened eight years ago [with Obama’s first election victory] there was, in my opinion, a surprising number of people who were actually surprised by the outcome [of the election] at the last minute and then scrambled, you know, through November to try to get any product,” Michael Fifer, CEO of Sturm, Ruger & Co., said in a conference call about his company’s strong third-quarter earnings. “We have done extensive contingency planning for any combination of who wins the White House, who wins the Senate, who wins the House.”

The Connecticut-based company reported a 66 percent increase in profit, to $20 million, on a 33 percent jump in sales, to $161 million, in the three months ending Oct. 1, compared to the same period last year. Sturm, Ruger firearms production rose 20 percent in the first nine months of the year while the company has upped internal and wholesale distributor inventories of its weapons by about 74,000 units in the third quarter in anticipation of a postelection surge.

“Inventory growth of certain products at distributors may have been amplified in anticipation of a possible postelection surge in demand,” Sturm, Ruger’s chief operating officer, Christopher Killoy, said in the call. These “certain products” include the company’s Ruger AR-556, a “modern sporting rifle” (otherwise known as an assault-style semiautomatic rifle), and its Ruger LC9s compact pistol, popular among gun owners with concealed-carry permits. What isn’t in heavy demand right now, according to Killoy: Ruger’s basic bolt-action rifle commonly used by hunters and sport shooters.

Regardless of who wins next week, America is well on its way to a record year in gun sales.

According to the latest report released Monday by the FBI’s National Instant Criminal Background Check System, or NICS, October background checks leaped 18 percent to 2.33 million compared with October 2015. These checks have jumped 26 percent so far this year, to 22.21 million.

With two months left to the year and a lot of seasonal holiday gun buying yet to go, this year's tally is set to shoot past last year’s all-time high. The number of federal criminal background checks act as a reliable proxy measure of the pace of gun sales, but they do not reflect the actual number of guns sold.

“It’s really unprecedented what we’ve seen,” Andrew Patrick, spokesman for the D.C.-based Coalition to Stop Gun Violence, told Salon. “Usually NICS checks dip in the summer months and then pick up again starting in October and rise [during] the holidays and then come back down.”

Part of this growth came in the wake of the June 12 Orlando nightclub massacre and the July 7 sniper-style murders of Dallas police officers. Some Americans typically rush buy guns in the wake of multiple-homicide shootings out of fear of the government’s response to these tragedies. But the NICS data shows the jump in demand this year began well before the shootings, a strong signal that gun owners are buying out of concern over the results of the election.

The National Rifle Association has been on the defensive, too. Even as Republican presidential nominee Donald Trump has struggled to raise campaign funds, the NRA has broken its record on political campaign spending to try to get Trump elected. The pro-gun group also has spent on state races, including nearly $2 million to keep incumbent Republican Sen. Senator Richard Burr in office in a tight North Carolina race.

Burr plunged himself into hot water this week by joking that a photo of Hillary Clinton should have a bullseye on it, an echo to a similar remark made by Trump in August that allude to acts of violence against a presidential candidate.

While guns sales are skyrocketing, a small number of Americans are likely playing an outsized role in gun sales. A Harvard-Northeastern University survey released last month suggests that almost half of the country’s civilian gun stockpile is brandished by only 3 percent of the population. So what’s going on with these collectors?

“It’s stockpiling,” Patrick said. “Some people probably think they’re going to have to rise up against the government. I don’t know, but that language and that rhetoric are out there.