Hillary Clinton showed up in the Grand Canyon State, a GOP stronghold, to mobilize Democrats for down-ballot races 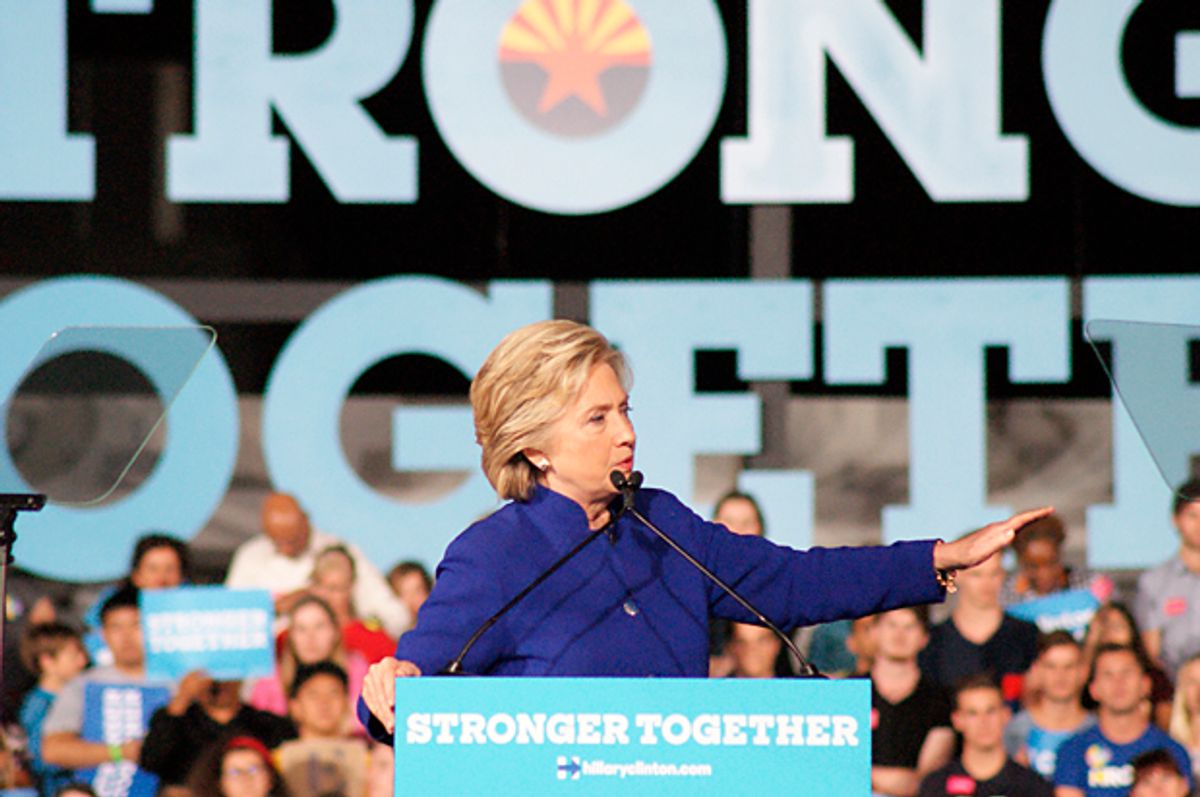 PHOENIX — It’s less than a week until Election Day, and Hillary Clinton is campaigning in Arizona. That is, to put it mildly, unexpected. This isn’t supposed to be a state that Democrats running for president even bother to visit. Only one Democratic presidential candidate has won Arizona in the last half century: Bill Clinton in 1996, who snatched the state from Bob Dole by a slim 2-point margin.

This is the state of Barry Goldwater, the godfather of the modern conservative movement. It’s been on the forefront of anti-immigrant policy, with SB 1070 and Maricopa County Sheriff Joe Arpaio emerging as national symbols of hard-line immigration “enforcement.”

Yet Clinton was here on Wednesday, for a big get-out-the-vote rally at Arizona State University in Tempe. She will be followed by her running mate, Tim Kaine, who is delivering a speech entirely in Spanish in Phoenix this week. Presidential campaigns are full of head fakes and diversionary efforts to prompt an opponent to waste time in noncompetitive states.

Generally speaking, though, you don’t send both candidates to a state in the final week of a campaign unless you think there’s a real shot you can win it. A few polls from late September and early October showed Clinton with a slim lead in Arizona. Trump has since climbed back to the top but not by much.

To be clear, the Clinton-Kaine ticket does not actually need to win Arizona. The state’s 11 electoral votes would be icing on a wide national victory. But the fact that Arizona is also host to two other races of national significance helps explain why Clinton and Kaine are spending time here.

John McCain, the 2008 Republican presidential nominee, faces a tightening U.S. Senate race with Rep. Ann Kirkpatrick, his Democratic challenger. And Joe Arpaio, up for re-election as sheriff, is looking vulnerable thanks to a criminal contempt charge filed against him for disobeying a federal judge’s order to quit profiling Latino residents of his county. Sending Clinton to the state fires up local Democrats and gives political organizing groups a chance to collect information and bolster get out the vote efforts.

Related: On the ground with the activists trying to take out Maricopa County Sheriff Joe Arpaio

Arizona Democrats turned out in force for the nominee. A line of more than 10,000 people snaked through the ASU campus waiting to see Clinton. Elizabeth Kurpius, a retiree from Surprise, Arizona, was thrilled at just having the chance to come to a Democratic rally in her state but worried about Clinton’s chances of winning Arizona. “I tell you what, my husband came with me" to the rally, she said. “But I couldn’t find Democrats to come with me!” Glancing around at the size of the line, she laughed, adding, “But maybe.”

Most of the ASU students I spoke with said they were either planning to vote for Clinton or had already mailed in their ballots. Caroline Bustamante, a freshman, said that there was no indecision on her part. “I’m a Democrat,” she said. “I’m a Latina, too. So I know Trump is against [me].”

Her friend Jenny Tevega, also a freshman, said she was planning to cast her vote in much the same way. “Mine’s also pro-Clinton, but at the same time it’s anti-Trump because of his comments towards Latinos," she said. And with Tevega "being Latina, he kind of influences me not to vote for him.”

There were also a few stray Republicans who showed up to make a point about their party’s nominee. Jairo Acevedo came to the rally holding a large “Latino Republicans for Hillary” sign. “In 2012, I voted for Romney,” he told me. “In the primary I voted for Marco Rubio."

Acevedo continued, "I just cannot vote for Donald Trump. I think he’s a bigot. I think he’s a racist. I feel repulsed by him.” He had already mailed in his vote for Hillary and he insisted he wasn’t alone: “Ninety percent of my friends who are Republican and Latino are voting for Hillary.”

In her remarks at the rally, Clinton touched all the bases of Democratic hot-button politics in Arizona. She took a swipe at McCain for being “afraid to stand up to Donald Trump.” She put in a plug for Paul Penzone, the Democrat running against Arpaio in the sheriff’s race, saying he’ll “follow the law not his own ideological agenda.” Clinton also whacked Arpaio's department for exhibiting “the worst pattern of racial profiling by a law enforcement agency in American history” and asked the crowd to imagine Trump nominating Arpaio as Homeland Security secretary to preside over mass deportations.

It was an interesting line of attack for Clinton, who had gone to great lengths over the summer to separate Trump from the Republican Party in general, that she is now trying her damnedest to sling Trump around the necks of down-ballot Republicans in key states. Trump’s toxicity among Latinos goes a long way to explaining why she’s made this shift and why she's the first Democratic presidential candidate in many years to make a serious play for Arizona.