Leaked email: "Bernie needs to be ground to a pulp," Clinton adviser and lobbyist wrote to John Podesta

"No mercy," longtime Democratic operative Joel Johnson wrote about Bernie Sanders. "Crush him as hard as you can" 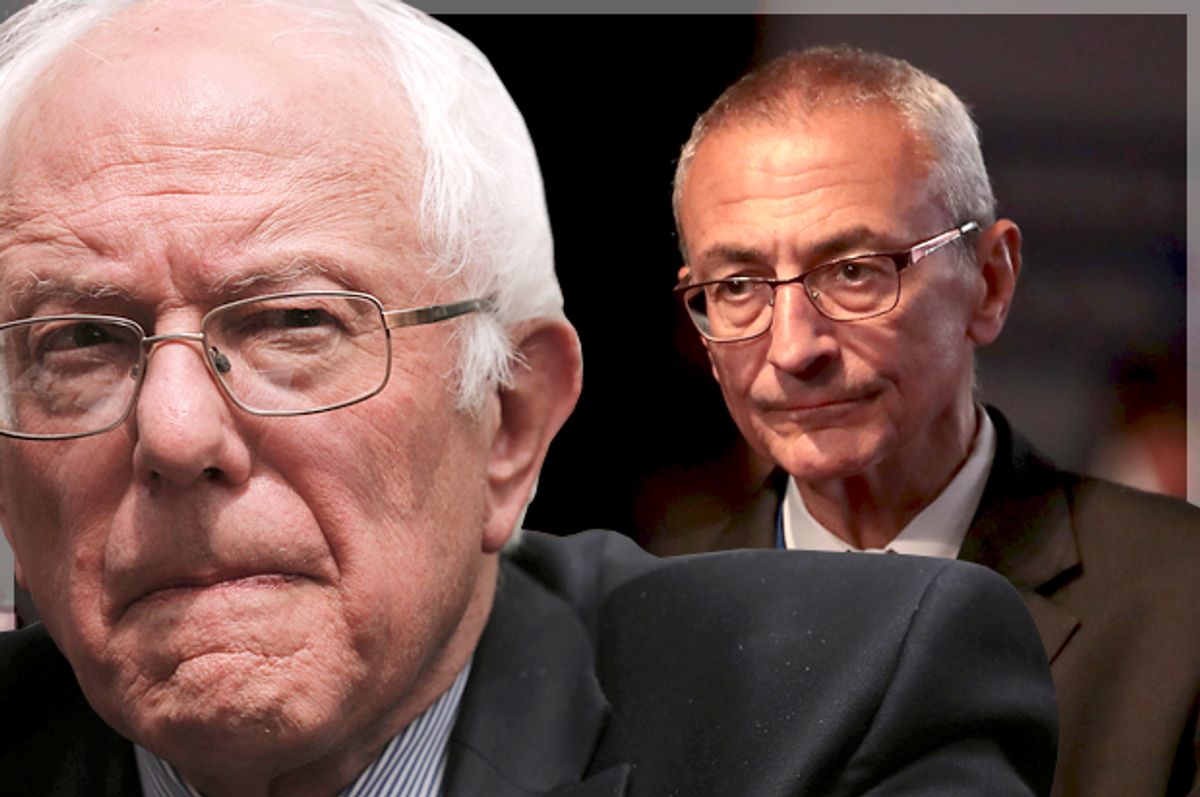 A Clinton adviser and longtime Democratic Party operative stressed in an email to the Hillary Clinton campaign, "Bernie needs to be ground to a pulp. . . . Crush him as hard as you can."

The email was leaked by the whistleblowing journalism organization WikiLeaks, which has released thousands of emails to and from John Podesta, the chair of Hillary Clinton's 2016 presidential campaign.

He wrote, "Bernie needs to be ground to a pulp. We can't start believing our own primary bullshit. This is no time to run the general. Crush him as hard as you can."

In a sudden lighter note, Johnson then added, "Other than that, hope all is well and congrats on Nevada!" Hillary Clinton had just won the Nevada Democratic caucus against Sanders, an independent senator from Vermont who ran an insurgent leftist grassroots campaign.

Joel Johnson is an influential political operative with a long history in Democratic circles.

From 1999 to 2001, he served as a senior adviser for policy and communications under former president Bill Clinton. In 2004, Johnson became part of the communications team for John Kerry's presidential campaign.

He also previously worked for former Democratic senators Tom Daschle and Howard Metzenbaum. Daschle is a Podesta ally who, since leaving office, has himself become a prominent lobbyist.

Johnson corresponded with Podesta and Clinton campaign officials on numerous occasions over several years. In another email from February of this year, Johnson wrote, "I know you can't look past Bernie." Emails to Podesta from various people in 2008 and 2011 also included Johnson as a recipient.

The Clinton campaign sought crucial advice from Johnson. In February 2015, two months before Hillary Clinton officially declared her run for president, Clinton campaign communications director Jennifer Palmieri wrote that she had asked "Joel Johnson to do some thinking about how HRC and campaign should engage the press in early stages of the campaign."

The leaked messages also show that Johnson and Podesta are close. In a January email, Johnson reminisced about a 2000 limo ride with Clinton, and Podesta replied by calling Johnson "brother." In a 2014 message, Johnson said he would donate $500 for Podesta's daughter Megan Rouse, who was running for school board in Dublin, California.

A 2004 Washington Post story "Lobbyists Take Leave to Advise Kerry Campaign" listed Joel Johnson as part of a group of "Democratic insiders" and "lobbyists with close ties to a wide array of businesses, including drug companies and Microsoft Corp."

Before joining Kerry's campaign, Johnson had served as a managing director of the Harbour Group, a Democratic public relations firm in Washington that he had co-founded. The group lobbied on behalf of oil, pharmaceutical, food processing and airline companies.

The Washington Post noted that Johnson "acted as a strategist for two of the business world's thorniest legislative issues," working on behalf of the Asbestos Study Group, a coalition of companies seeking limits on asbestos-related lawsuits; and Nextel Communications, which was trying to buy portions of the publicly owned radio-wave spectrum before it later merged with Sprint.

Today Johnson is the managing director of Glover Park Group, an influential public relations and lobbying group that was founded by former White House and Democratic Party officials. Glover Park Group has worked on behalf of Visa, Microsoft, Yahoo, Pfizer and Fannie Mae.

Glover Park Group's ties to the Clinton campaign and Democratic Party go deeper. Christina Reynolds, the former managing director of Glover Park Group, was replaced by Joel Johnson in May 2015, when she became deputy communications director for Hillary Clinton's presidential campaign. Many messages to and from Reynolds, using her Glover Park Group email, appear in the Podesta emails released by WikiLeaks.

From 2009 to 2010, Reynolds also served as the director of media affairs for the Obama White House, according to her LinkedIn page. Before that, she worked as the research and policy director for the Democratic Congressional Campaign Committee and the communications director for Daschle's 2004 U.S. Senate campaign.

Joel Johnson was by no means the only Democratic Party insider to express such negative feelings about Sanders' presidential campaign. Four top Democratic National Committee officials, including former chair and close Clinton ally Debbie Wasserman Schultz, resigned after leaked emails showed that they worked to favor Clinton and undermine Sanders.

The Clinton campaign has neither confirmed nor denied the authenticity or the emails, but the emails have contained information that could only have been known internally and therefore cannot be forgeries. The Clinton camp and Obama administration have blamed Russia for the hacks, although some experts have said that there are reasons to be skeptical of this.