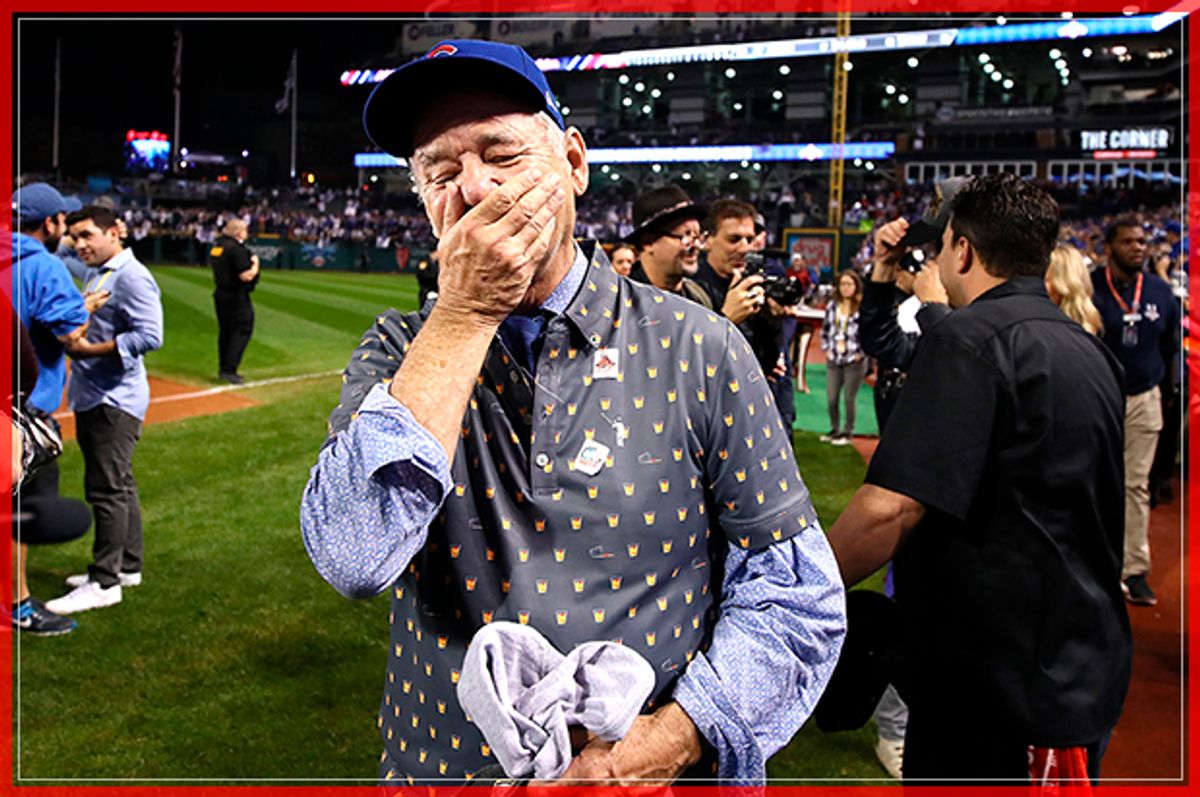 CLEVELAND, OH - NOVEMBER 02: Actor Bill Murray reacts on the field after the Chicago Cubs defeated the Cleveland Indians 8-7 in Game Seven of the 2016 World Series at Progressive Field on November 2, 2016 in Cleveland, Ohio. The Cubs win their first World Series in 108 years. (Photo by Ezra Shaw/Getty Images) (Getty Images)
-- I'm a jaded Mets fan and a jaded baseball fan. Part of me is disappointed and worried that Chicago Cubs fans will become absolutely unbearable over the next few weeks and months. There's a lot to unpack, and a lot that will make me sick about the Cubs' World Series win. But for now, there's this photo of Bill Murray. The fact that he's a superstar is hilarious in the context that he was finally able to see pretty much the only thing that, for him, money could never buy. You might have seen Facebook friends recently check in at the Standing Rock Indian Reservation in North Dakota. More than 1 million people have done so, expressing solidarity with protests there against the Dakota Access pipeline.

For months, Native American groups have led demonstrations against the $3.8 billion, nearly 1,200-mile construction project, which would transfer 470,000 barrels of crude oil per day across several states, from North Dakota to Illinois. Indigenous Americans, and activists from around the country who have joined them, warn the pipeline would inevitably leak, polluting the water and land, jeopardizing the health of local communities and the environment.

Authorities have brutally cracked down on the self-described water protectors, arresting hundreds, pepper spraying them, shooting at them with rubber bullets, and even detaining activists in what they say were dog kennels. Private security hired by the fossil fuel company building the pipeline, Energy Transfer Partners, also sicced dogs on the self-described water protectors. Video footage from the independent news outlet Democracy Now showed blood in the teeth and nose of one of the attack dogs.

Boqueron, Paraguay   Jorge Adorno/Reuters
The carcass of a yacare caiman lies in a died-up riverbed California is not the only part of the globe that is drying up thanks to climate change: Here’s the carcass of a yacare caiman, in what used to be the Pilcomayo River in Paraguay. The river, which begins in the Andes, is at its fullest one of the largest in South America. Kenya is stepping up its efforts to protect endangered elephants, such as this herd pictured in Amboseli National Park. The number of living elephants in Kenya has rebounded to 32,000, after falling all the way to 18,000 in the the 80s, due to the ivory trade. But that is pitifully low, still, and conservationists, working with local experts of the Masaai tribe, are fitting elephants with collars designed to track the elephants and keep them from coming too close to human habitations.