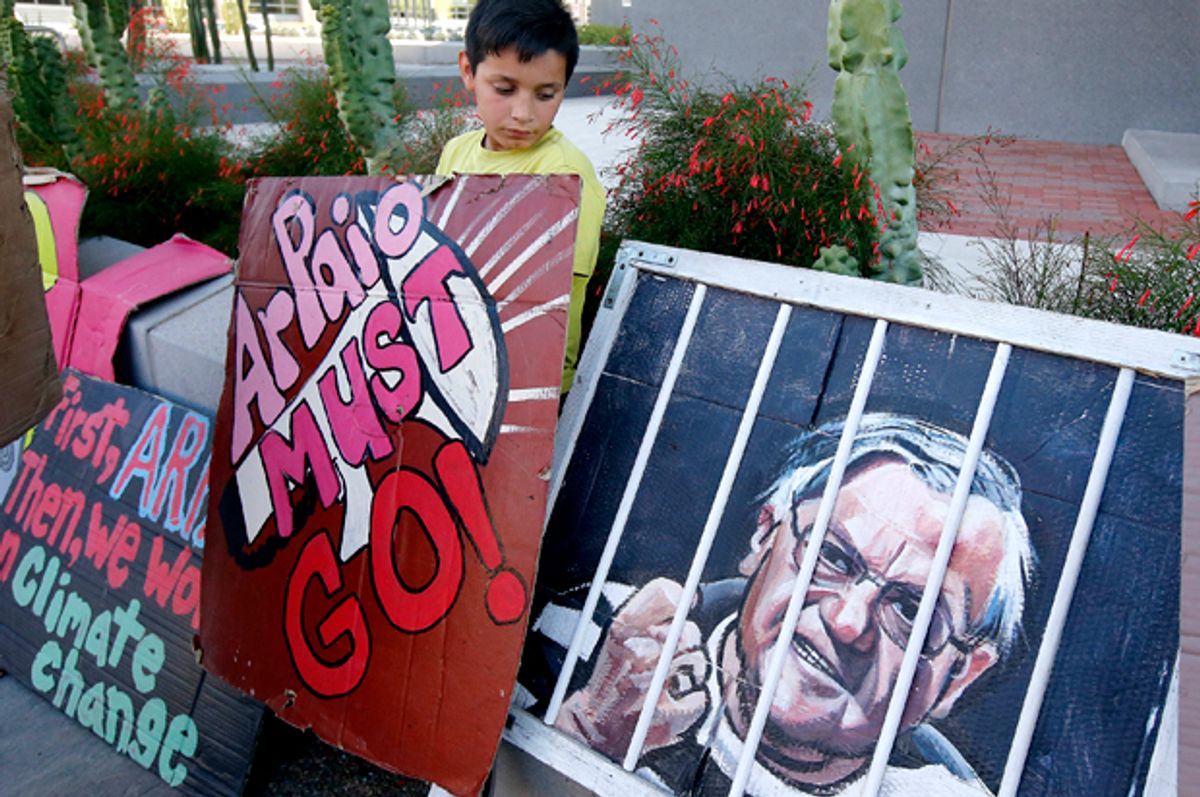 A protester stands with his sign during a rally in front of the Maricopa County Sheriff's Office Headquarters (AP/Ross D. Franklin)
--

PHOENIX — Here in Arizona's Maricopa County, the political scene is starting to get interesting. This state, which has voted reliably Republican for the last few presidential cycles, is getting some serious Democratic attention during the week before Election Day: Both presidential nominee Hillary Clinton and her running mate Tim Kaine will be appearing in Phoenix over the next couple of days.

And beneath all the headlining presidential speculation are a series of local races that have taken on national significance, including the re-election campaign of Maricopa County’s infamous sheriff, Joe Arpaio.

Arpaio has become a hero of the hard-line anti-immigrant right by his use of his office to target, imprison and humiliate undocumented immigrants and Latino residents under his jurisdiction. Arpaio’s “Tent City” jail, in which inmates are forced to endure the sweltering Arizona heat, is the most well-known of his abuses. His department enthusiastically practices racial profiling and proudly defies court orders from a federal judge to cease the practice.

Earlier this month, Arpaio was slapped with a federal contempt charge for disobeying those orders, and Maricopa County has spent tens of millions of dollars in taxpayer money defending the sheriff while he refuses to cease persecuting undocumented immigrants.

All these factors, combined with Republican unease over Donald Trump (an enthusiastic Arpaio supporter) have emboldened Democrats and local activists, who think Arpaio is more vulnerable than he was in 2012, when he won re-election by 80,000 votes out of 1.3 million cast. Some sporadic polling data has indicated that they may be on to something and Arpaio could be in trouble. I spent a day here in Phoenix talking to representatives of one of the activist groups leading the organizing efforts against the sheriff, Bazta Arpaio (“Enough Arpaio”), to gain a sense of what people are doing and what they hope to accomplish on Nov. 8.

Tania Unzueta, the field director for Bazta Arpaio, said that the sentiment motivating the group and its organizers is one of urgency. “Their homes have been raided by Arpaio; their family members have been deported,” she said. “And so [they're] seeing this as a chance; it’s urgent.”

There’s also the Trump factor, which Unzueta believes is helping people see Arpaio for who he really is. “Arpaio and other people often get away with talking about criminalization [of undocumented immigrants] as ‘safety’ and as ‘protecting communities,’” she said. “And I think Trump has just taken [it] so far to the extreme that it’s more clear that that’s coded language.”

While the organization’s primary goal is to unseat the sheriff, there is a longer-term strategy in place to create a stronger, more organized grassroots network that can be mobilized to change the county's law enforcement policies. “Any sort of electoral campaign goes easily to the people who are the higher-propensity voters,” Unzueta told me.

“To us it’s also developing a voter base and a base of people that hasn’t really been reached out to, within the electoral or the grassroots context,” she added. This strategy will be implemented, she said, regardless of which candidate walks away from the election holding the office of Maricopa County sheriff.

To that end, the organization pointedly does not make an active case on behalf of Arpaio’s opponent, Democrat Paul Penzone. Its message is strictly anti-Arpaio. The group maintains that posture because it understands that even if Arpaio loses, the policies he leaves behind will still have to be changed and this will require putting pressure on Penzone to change the culture of law enforcement in Maricopa County.

I tagged along on a Bazta Arpaio canvassing trip a week before Election Day, in the Phoenix suburb of Peoria. Leading the trip was Ernesto Lopez, a burly, soft-spoken activist who had moved from Los Angeles to Phoenix in the mid-2000s and was appalled by Arpaio’s brutal tactics. Lopez collected a van load of students from the local high school and dropped them off at strategically chosen locations throughout the area — at neighborhoods with names like New River Ranch and Sun Air Estates that boast row upon row of taupe-shaded houses on gravel plots.

Lopez and his volunteers are aiming to nudge people to mail in their ballots ahead of the deadline and, if possible, find out if their votes are for or against Joe Arpaio. They have a data collection app called MiniVAN installed on their phones telling them which houses to visit, who lives there, their registration status and other info. The people in their target universe are newly registered voters, people who have become disengaged from the electoral process and other unreliable voters whom major political campaigns have tended to not prioritize.

Throughout the afternoon, Lopez gives two of his volunteers, Adrian and Octavio, a lesson in how to canvass. As they move from house to house, he continually feeds the two students tips and pointers — what to say to get the attention of a resident, what to do when the person they’re looking for isn’t home, how many times they should knock or ring the doorbell, where to stand so people can see them through the peepholes. “Confidence," Lopez told them. "People smell confidence."

“What if they think we’re cops?” Octavio asked, as he warily tapped on the door of one of their target houses.

“This is a nice neighborhood,” Lopez said. “Cops don’t come out here that much.”

The immediate goal of these canvassing operations is to contact 150,000 voters in and around the Phoenix metro area and urge them to become involved and vote against Joe Arpaio. Lopez said about 30 percent of the people that his group has contacted have already mailed in their ballots, a number he’s pleased with. Suburbs like Peoria are where Bazta Arpaio is hoping to do some damage to the sheriff’s base of support.

Convincing urban voters and Latinos to mobilize against Arpaio is a bit easier because these voters react more strongly to the sheriff’s racially divisive rhetoric and authoritarian tactics. Out in the wealthier (and whiter) suburbs, the anti-Arpaio message requires some more finesse.

“They don’t care so much about [Arpaio’s] racism,” Lopez said of Maricopa County’s suburbanites. “They care about his money wasting.”

When he makes the anti-Arpaio pitch to targeted voters here in Peoria, he always is sure to note how many millions of dollars Arpaio’s legal troubles are costing voters.

For this final week of the election, Bazta Arpaio is planning to ramp up the canvassing and put together a massive push to mobilize voters and get them to the polls. On Election Day, Lopez and his associates plan to be in areas that are heavily Democratic, as well as in predominantly Native American and Latino neighborhoods, to help voters find their polling locations, encourage them to stay in long lines and hand out bottles of water.

Defeating Arpaio would, of course, be a massive victory for the immigrant rights activist community. It would send a message to other law enforcement agencies and elected officials that anti-immigrant hostility carries electoral consequences, and it would speak to the increasing power of Latino voters. It would also be an important first step in repairing the dysfunctional relationship between Maricopa County’s law enforcement officials and the community they’re supposed to protect.