The media isn't for Hillary Clinton: Her emails have been covered more than all policy proposals

While Donald Trump claims that the media is rigged against him, the numbers show news favors her non-scandal 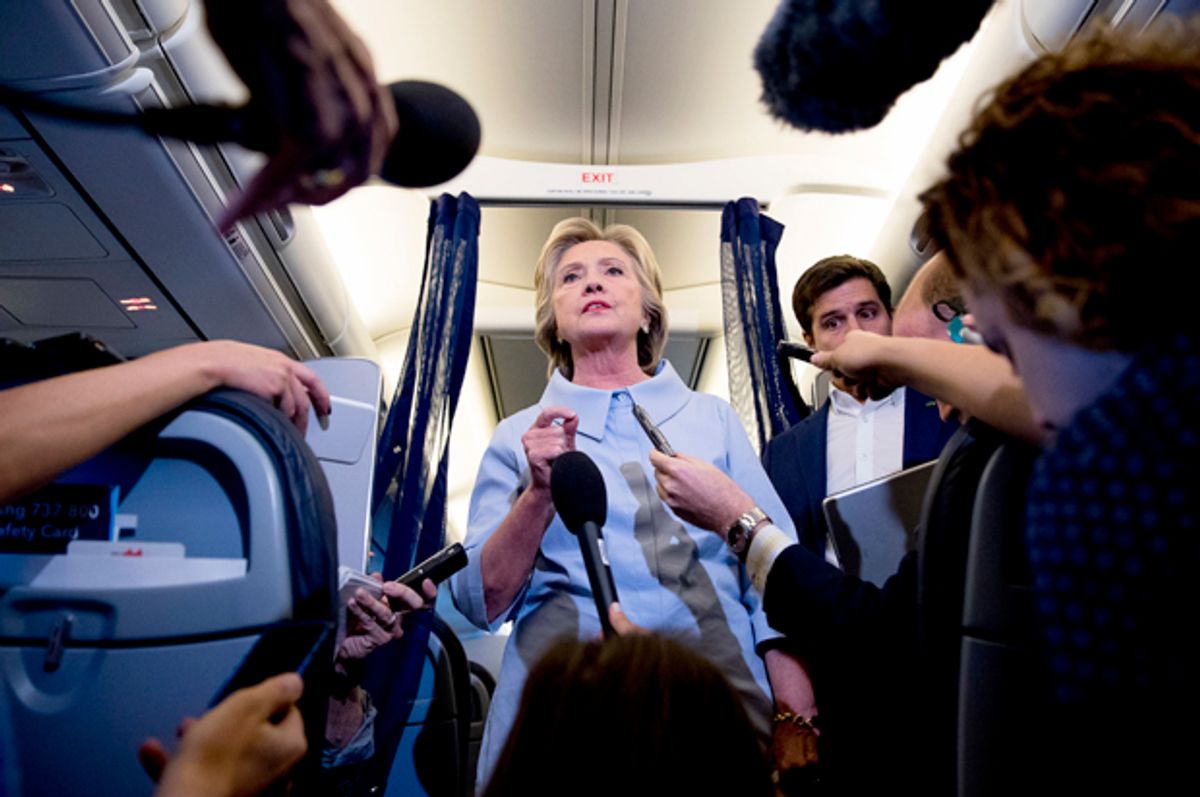 With the horse race portion of the Democratic primary contest behind them, party members gathered in Philadelphia last July to nominate Hillary Clinton and to hammer out the party platform. In speech after speech, including detailed primetime addresses by Michelle Obama, President Obama, and of course the nominee herself, Democrats laid out the party’s vision for the future. If ever there was a window of the campaign year when issues and policies were clearly at the forefront, it was the summer convention season.

So, how much of the news coverage from the four weeks surrounding the conventions centered on policy? For Clinton, just four percent, according to a study by the Shorenstein Center on Media, Politics and Public Policy at Harvard University.

“Not a single one of Clinton’s policy proposals accounted for even 1% of her convention-period coverage; collectively, her policy stands accounted for a mere 4% of it,” wrote Harvard professor Tom Patterson.

And this is key: During that same summertime period, Trump received three times as much policy coverage as Clinton. Why the large disparity? “A major difference between Trump and Clinton’s coverage was that she had a news category entirely of her own—the emails that she sent and received as secretary of state,” Patterson explained. And as he noted, the vast majority of Clinton email coverage was negative.

Those numbers certainly suggest that the press spends so much time and attention covering Clinton emails that there isn’t room left for policy and issues.

And that imbalance was before the FBI email “bombshell” late last week, which produced an almost comical spasm of media hysteria, punctuated by an avalanche of man-on-the-moon type of coverage. “Email” has been mentioned more than two thousand times on the three cable news channels since last Friday’s FBI announcement, according to TVeyes.com.

“Over the last few days, I've watched the best journalistic minds of my generation devolve into madness, frothing at the mouth over a story that neither they nor the voters they're successfully mis-educating seem to understand,” wrote Will Bunch at Philly.com

And let's be honest, endless email coverage, most of which revolves around pure speculation, is just another excuse not to cover policy. Would serious policy coverage have withered and died this election cycle even without the media’s email obsession? It’s certainly possible. But I think the email fixation quickened the demise.

As I suggested in August, Clinton emails are the new Whitewater. Meaning, it’s a “scandal” in search of a crime and it’s a scandal production staged by Republicans with the eager help of the press. And yes you can substitute “Clinton Foundation” for “emails” and you get pretty much get similar results.

Part of that is because journalists are heavily invested in the emails storyline and have been since March 2015. Journalists want there to be a blockbuster story, just like it seemed clear so many journalists wanted the FBI to “reopen” its investigation last week. (They’re not.)

Part of that stems from a never-ending attempt to criminalize the Clintons. And part of that’s because the campaign press wants more spectacle to cover during the closing days of the election. (Especially anti-Clinton spectacle.)

“The media’s urgency to maintain drama in an election that was increasingly looking like a blowout” made the return of the email storyline “inevitable,” according to professors Matthew Baum and Phil Gussin, writing in The Washington Post. “A dramatic horse race in which the outcome is uncertain and continually fluctuating is perpetually novel. Additional stories about the candidates’ long-standing policy positions? Not so much.”

Obviously, the campaign press isn’t supposed to be in the business of trying to craft compelling storylines. Yet here we are. And so when journalists feel the need, they just lean on the email storyline.

What gets overlooked in the process? Substance.

“[E]nough is enough,” wrote Isaac Chotiner at Slate, while lamenting the media’s wildly disproportionate email attention. “We are extremely close to the most important American election since God knows when, an election whose reverberations are almost impossible to imagine, let alone measure. Let’s focus on that for a change.”

But sadly it’s too late for this campaign. The press picked its campaign priorities a long time ago and has rarely strayed from that agreed-upon narrative: Clinton = emails. Note that in eight of the ten weeks between July 11 and September 18, “email” was the word most Americans associated with the Clinton campaign coverage, according to Gallup.

The first woman to be nominated by a major party for president is defined, almost completely, by the electronic communication platform she used several years ago while serving as secretary of state. She’s defined by that and by the Republicans’ Ahab-like attempt to turn that story into a career-defining scandal.

It’s only Clinton who gets defined by emails. Because the press, reading off the GOP song sheet, says so. And because the press, alongside the GOP, has been trying to criminalize the Clintons for 20-plus years.