Be afraid — be very afraid: Donald Trump's transition team is lining up corporate hacks and readying a rollback of Obama's eight years

Trump's transition team, led by Chris Christie, offers a window into the terrifying workings of a Trump presidency 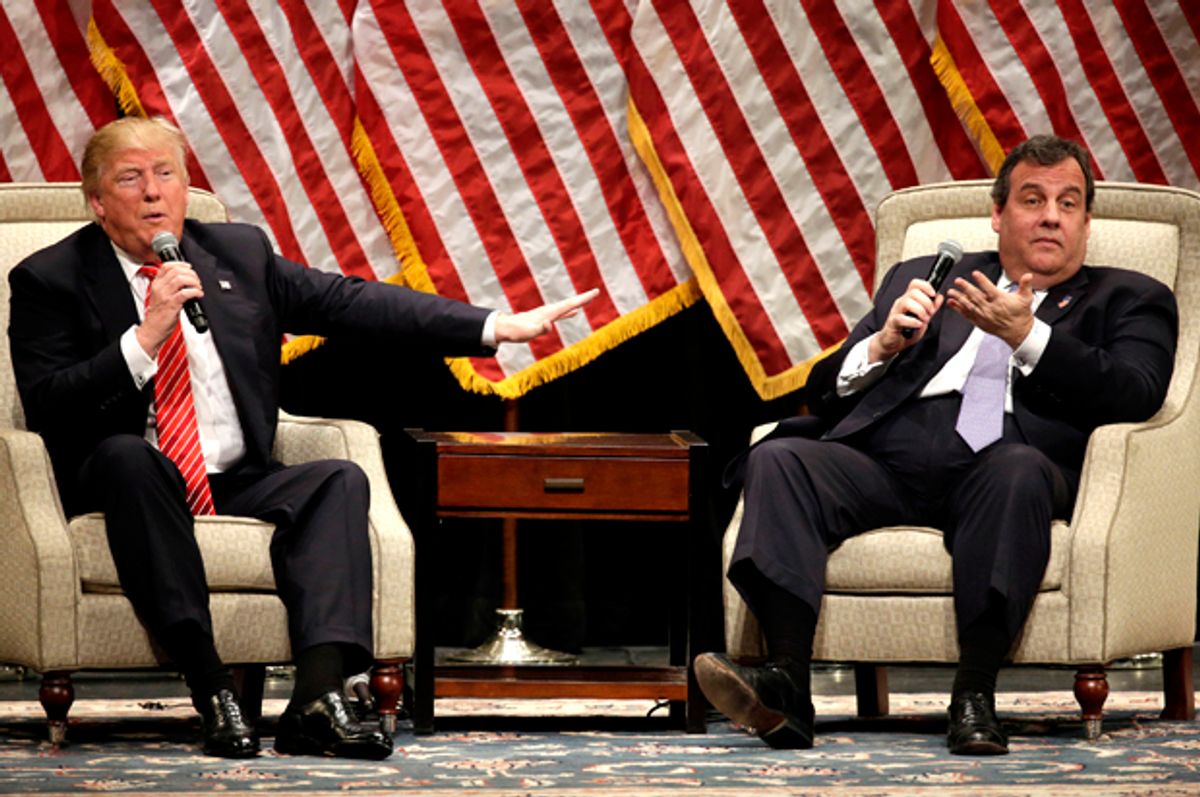 The Donald Trump carnival may be a traveling grotesquery of incipient fascism, but there is one area where it seems to be functioning like something resembling a normal presidential campaign.

The transition teams of both Trump and Hillary Clinton have been hard at work for several months, preparing for an orderly transition of power from Obama’s administration to that of the winner of Tuesday’s presidential election. Clinton’s team has remained small, owing to her campaign’s apparent desire to focus on finishing the race and not look as if it is taking her lead in the polls for granted and getting ahead of itself.

Trump’s transition team, on the other hand, has been plowing ahead. This action seems to be mostly a function of needing to ramp up the infrastructure of wonks and advisers that campaigns usually have working on policy a year ahead of time. Trump has neglected to build up such a team, which might turn out to be lucky for him. Since he is famously indifferent to policy details, the people doing this work now are able to accomplish it without interference.

This is making for some jarring moments, such as when a White House spokesperson said, after both transition teams had a meeting with Obama administration officials to work on details of the upcoming transfer of power, “We have appreciated the seriousness with which both campaigns’ transition teams have approached their planning.” Who would have ever thought the word “seriousness” would ever be associated with Trump’s campaign in any way?

What is emerging from the transition team’s work is a portrait of what a Trump administration might look like if, God help us all, he somehow manages to pull off a victory on Tuesday. And what is emerging is not pretty: A disengaged chief executive, surrounded by a cabinet and a team full of the worst sycophants and mountebanks of the last 40 years of Republican politics, overturning any and all of President Obama’s achievements as fast as Trump can sign his name with his tiny little hands.

Ironically, Republicans have spent eight years calling Obama a dictator and challenging his authority to use executive orders on every single detail of his agenda, to the point of taking the weird step of the House suing the president in order to stop him. Now, with the help of the transition team, they are lining up a raft of executive orders for Trump to sign the minute he steps into the Oval Office. These orders would “undo hundreds of Obama’s regulations on energy, taxes and health care.” This would include overturning the hated Obamacare, of course.

After all its complaints about feeling bullied by the current administration (i.e. “Obamacare was shoved down our throats!”), the GOP is ready to have its revenge, using this half-bright glob of orange Jell-O to do it.

And who is laying the groundwork for this rollback? The transition team is being led by Chris Christie, in what is either a bone tossed to the New Jersey governor to soothe his hurt feelings after being passed over for vice president, or a chance for him to prove his value to Trump beyond acting as the mogul’s personal Chicken McNugget wrangler. Other senior members include Andrew Bremberg, a policy adviser to Mitch McConnell who also worked in the George W. Bush administration; J.D. Gordon, a right-wing former Navy officer and foreign-policy adviser who has also advised Sarah Palin and Herman Cain, if you feel like really having your confidence inspired; and Reagan administration attorney general Ed Meese, who is apparently still alive.

The team is also said to be looking at mostly business executives to staff Trump’s Cabinet, which might result in the spectacle of an oil-industry CEO, 74-year-old Frank Lucas of Lucas Oil, becoming Secretary of the Interior. This is akin to holding open the henhouse door for the fox.

And for all the talk of how many conservatives want nothing to do with Trump, there are still plenty of members of the GOP who are displaying no qualms about working for the administration of a xenophobic ethno-nationalist:

As can be explained by the votes and continued support of high-profile Republicans like Paul Ryan, Ted Cruz and Marco Rubio, this is pretty simple to understand. Sure Trump is a racist who would wreak untold havoc with our standing in the world, throw the healthcare market into chaos at the stroke of a pen, and deport millions of people without due process, just for starters. But think of the tax cuts the very wealthy would get!

No one in Republican politics, not even the #NeverTrump crew, comes out of 2016 with clean hands. Even assuming Hillary Clinton wins, in a just world the GOP will have to drag the ghost of Trump around like an anvil until the party becomes a functional governing entity again. No matter how many decades that takes.