As student body president in 1968, Hillary Rodham had the same establishment-friendly middle-road politics as today 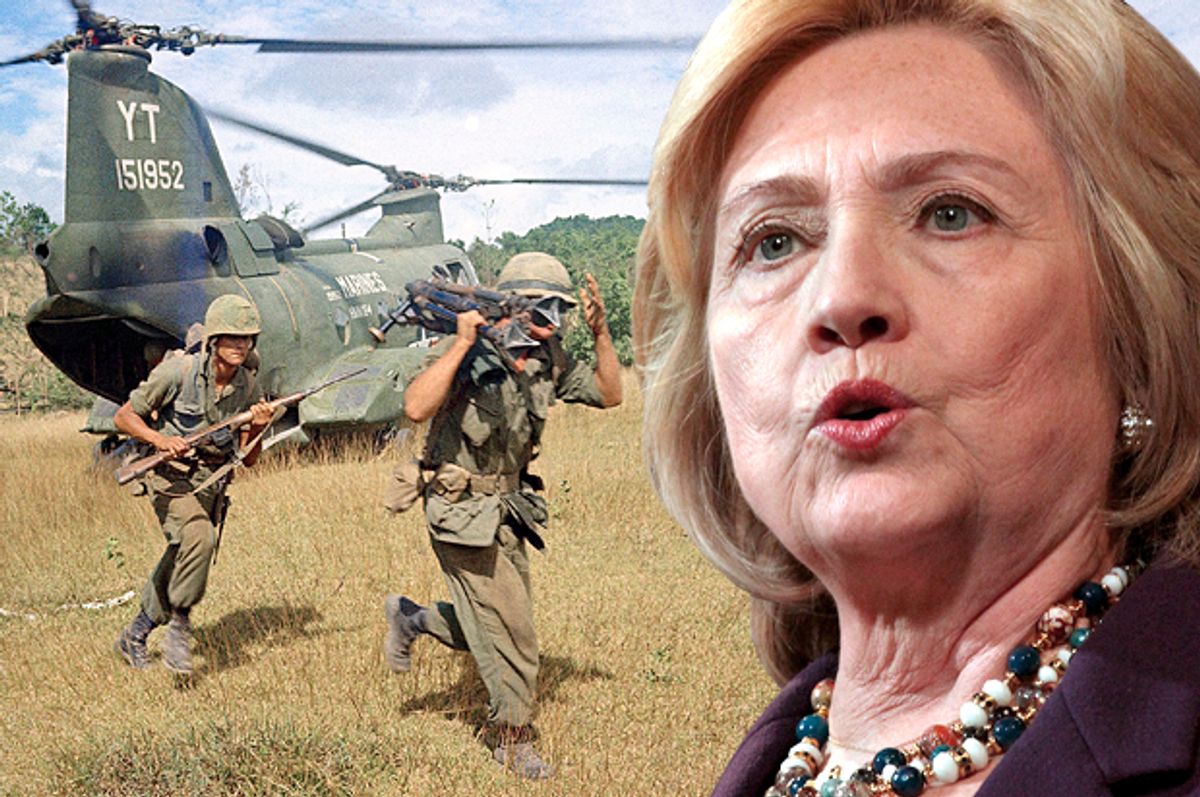 When she was student body president at Wellesley College in the late 1960s, Hillary Clinton, by her own account, stayed up all night trying to talk other students out of protests against the Vietnam War.

Hillary Rodham (her maiden name) did not support the bloody U.S. war in Vietnam, but she was concerned that demonstrations against it would make her school look bad.

Clinton made these remarks in an interview with an alumni magazine. They were reported by Politico in a recent article about her tenure as student body president at Wellesley.

The Politico article, titled "The First Time Hillary Clinton Was President," demonstrates how the establishment-friendly centrist politics Clinton has today, as the most likely candidate for the next U.S. president, have been maintained over decades. Clinton has long tried to push those on the left toward accommodation with the right, and has long expressed faith in the status quo.

In 1968, Rodham ran for president of Wellesley's student government on a characteristically centrist platform. This was a revolutionary time, but she played it safe.

Rodham's main opponent in that election, Fran Rusan, told Politico she ran a campaign “somewhere far to the left of Karl Marx,” whereas Rodham “was clearly the consensus candidate running a fairly moderate campaign.”

“Hillary tended always to be what I will call a consensus person,” another classmate told Politico.

In 1964, Hillary had supported far-right Republican Barry Goldwater. By 1968, she had come to embrace a tepid liberalism.

Opposition to the Vietnam War was growing at this time. The war had escalated; hundreds of thousands of Vietnamese had already been killed by U.S. troops and in U.S. bombing campaigns, along with many thousands more in Cambodia and Laos.

Reflecting more than 20 years later on the spring of 1968 in an interview with a Wellesley alumni magazine, Hillary explained, "I stayed up all night ... to talk students out of staging a Vietnam War protest that would embarrass our college."

By the time U.S. forces withdrew from Southeast Asia in 1975, up to 3.8 million Vietnamese had been killed in two decades of bloodshed (up to 800,000 Cambodians and 1 million Laotians were also killed). Civilians had been massacred on numerous occasions; Southeast Asia was scarred forever. At least until 1968, the war had been widely supported and expanded by both major U.S. political parties, Republicans and Democrats alike.

Hillary ostensibly opposed the Vietnam War by 1968, but would go on to establish herself in later years as one of the most hawkish figures in U.S. politics. She has supported virtually every U.S. military intervention of the past 30 years, and often with fervent enthusiasm.

During the course of the 2016 campaign, Clinton has come to resent her frequent association with establishment politics, at least in her public discourse. In her unexpectedly grueling primary race against Bernie Sanders, a social democrat and one of only two elected independents in the U.S. Congress, Clinton lashed out at such a characterization.

Yet a glance at her college presidency evinces a firm and longstanding commitment to centrist politics. Hillary Clinton has never wanted to rock the boat.

In a fall 1968 speech, student body president Rodham, then nearly 21 years old, told incoming Wellesley students, “Although we, too, have had our demonstrations, change here is usually a product of discussion in the decision-making process.” Progress, she said, “often results through action taken by the Senate of the College Government Association.”

Rodham had spent her summer interning on Capitol Hill. Politico's Michael Kruse wrote, "At a historic juncture of acute anti-establishment fervor, she told them to trust the system."

Clinton's tendency to play it safe and stay in the center, to not take political risks, is the hallmark of her politics today. Likewise, during Soixante-Huit, a landmark year in revolutionary history throughout the world, Hillary Rodham was a voice for moderation.

Another student later wrote of Clinton, "Even then I thought she was way too mainstream, talking the language of the administration, co-opted, all about politics and visibility."

Black student activists made similar observations about Hillary's centrist, even opportunist politics. Leaders of anti-racist groups told Politico that Hillary Rodham was "supportive" but  "didn’t have a leadership role."

A co-founder of the organization Wellesley Against Racism remarked, “Hillary was supportive but from a more centrist position. I think that’s what enabled her to win elections and stay in good communication with the administration.”

She is nothing if not consistent. Today, Hillary Clinton continues to present herself as the moderate consensus candidate. When pressured from the left by Bernie Sanders, Clinton claimed she was a progressive, but only a "pragmatic progressive," with emphasis on the former.

Hillary has relied on this approach for nearly 50 years. A Wellesley professor, reflecting on Rodham's term as president there, told Politico, "She was very pragmatic in terms of how ... you approach the college administration."

At the peak of the New Left, when Rodham was more than willing to make concessions, Sanders was putting his body on the line. When Hillary was a self-declared "Goldwater Girl," Bernie was getting arrested in acts of civil disobedience against Jim Crow and systemic racism.

In light of this history, Clinton's remarks in a private conversation with donors in February are hardly surprising. In a recording of the discussion, obtained by The Intercept, Clinton can be heard emphasizing that her political views are somewhere on the spectrum "from the center-left to the center-right." Similarly, as The Intercept noted, Clinton stressed in a September 2015 speech in Ohio, "I get accused of being kind of moderate and center. I plead guilty."

More private paid speeches Clinton delivered to Wall Street, excerpts of which were released by WikiLeaks, show that, while she may offer some criticism of the financial sector in public, Clinton privately admits she "represented" and had "great relations with" Wall Street.

These views are consistent with the strategy of "triangulation," pioneered by Bill Clinton in the 1990s — one of talking left and walking right. The "New Democrat" paradigm the Clintons constructed — the pro-corporate, neoliberal Democrat who supports war along with civil and women's rights — is the embodiment of this politics.

Clintonian triangulation remains alive and well. A transcript of a private meeting released by WikiLeaks shows that Clinton disparagingly told "radical environmentalists" to "get a life." Clinton shifted left on the issue to try to swoop up some of Sanders' primary support, but with Sanders out of the presidential race, she has largely dropped climate change from her campaign speeches and has shifted back to the right.

The fact that the term "triangulation" was coined by Dick Morris is itself symbolic. Morris served as a chief political advisor for President Bill Clinton in his 1996 reelection campaign, in which Clinton promised to "end welfare as we know it" (and later succeeded in doing so). Today, Morris is a prominent right-wing political consultant and pundit.

One can see the roots of Clintonian triangulation in Hillary's college thesis, which she wrote on Saul Alinsky, a radical activist known for his organizing prowess. In his article, Politico's Michael Kruse noted that 21-year-old Rodham had criticized Alinsky, writing, “Interestingly, this society seems to be in a transition period, caught between conflict and consensus.” She spoke of opposition to the political establishment as "contrived conflict" that "serves to exacerbate the polarization."

Hillary later wrote that Alinsky "believed you could change the system only from the outside." She added, "I didn't."

When Hillary Rodham and Bill Clinton met as students at Yale Law School, they were immediately united in their shared centrist opportunism and devotion to the politics of pragmatism. In fact, on their first date in 1971, this young couple, with the White House in their future, crossed a picket line.