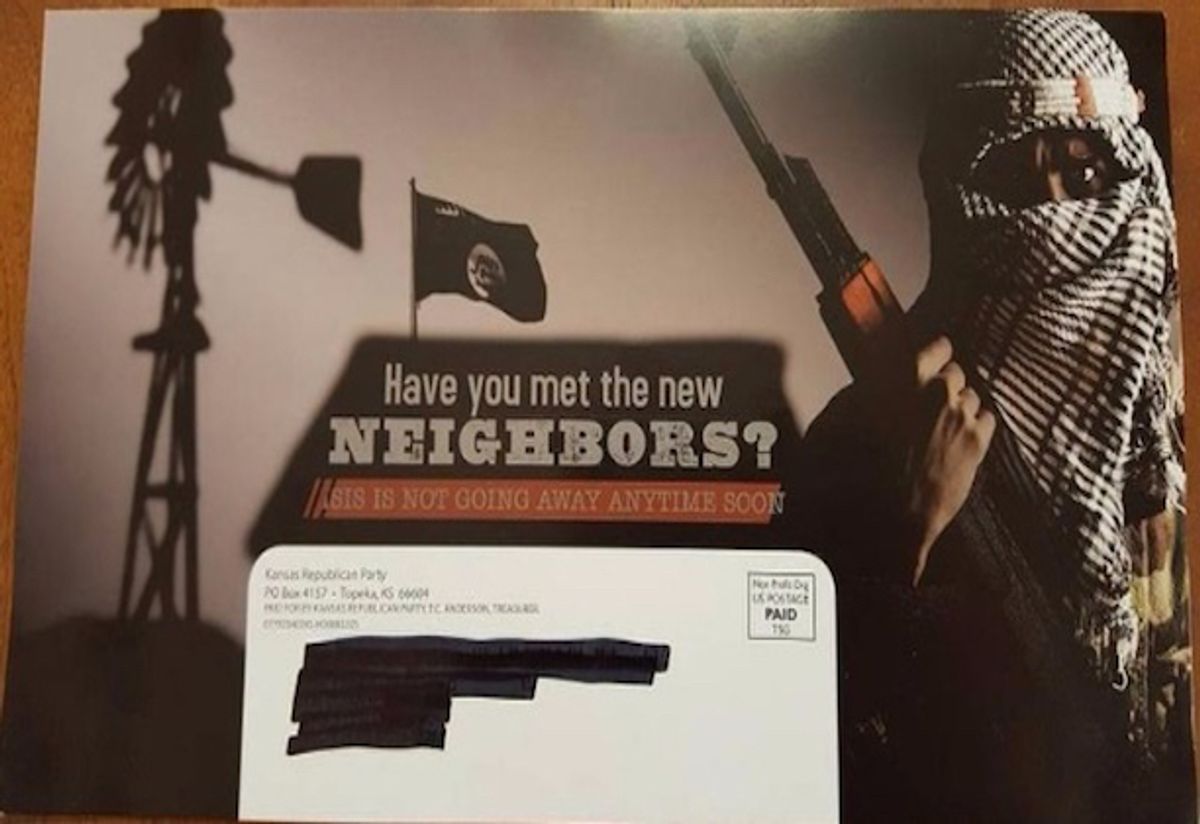 “The only good Muslim is a dead Muslim,” one of the suspects said, according to a federal complaint.

Now, in the lead up to Election Day, the Kansas GOP has seemingly taken up the same mission, ginning up Islamophobia for political gain.

The Republican Party of Kansas has come under criticism this week for distributing mailers suggesting that Muslims in the state may be ISIS fighters. The other side of the mailer talks about Scapa’s support for training Kansas law enforcement officers to “recognize and deal with foreign and domestic threats to our state, from those who support ideologies that are in conflict with the U.S. Constitution and our Kansas values,” according to the Wichita Eagle.

"ISIS is not going away anytime soon."

Clay Barker, the state GOP’s executive director, confirmed to the Eagle that similar mailings have been sent across the state.

A second flier sent to the 88th District in Kansas in support of Republican state Rep. Ken Corbet depicts explosions on the street with text saying “TERRORISTS TO KANSAS” and pictures of children asking, “What is ISIS? Will they hurt me?” The GOP received severe criticism for the fliers depicting ISIS, which has carried out several attacks in the U.S. and also occupies large parts of Iraq and Syria.

Robert McCraw, director of government affairs for the Council on American-Islamic Relations in Washington, D.C., called the mailers “a shameful example of scare mongering tactics that I hope the Republican Party can learn to move away from.”

Moussa Elbayoumy, the chairman of the Kansas chapter of the Council on American Islamic Relations, criticized the fliers, telling ABC News that he believes that they were intended to "sow the seeds of fear in order to exploit that fear."

For its part, the Kansas GOP has defended its fearmongering fliers.

"We did polling and focus groups and the one issue that got overwhelming positive response and was associated with Republicans was safety,””  Kansas GOP executive director Clay Barker told the Wichita Eagle. “It’s a positive issue for Republicans.”

The head of the Republican Party in the state cited Guantanamo Bay, "police being shot and those knuckleheads in Garden City" -- a reference to the failed anti-Muslim terrorist plot -- to explain that "it all kind of added up to a security issue." Barker admitted to the paper that with state Republicans running the Kansas economy into the ground, such Islamophobic tactics help scare up votes:

Most other issues are muddled or this is not the year for Republicans to be arguing education or taxes because there’s a general feeling either Republicans aren’t effective or the voters aren’t quite sure who to believe.