Melania, unmuted: Melania Trump gave a speech using her own words — which only reminded us why women can't relate to her

In her first speech since her plagiarized address at the Republican convention, Melania was laughably out of touch 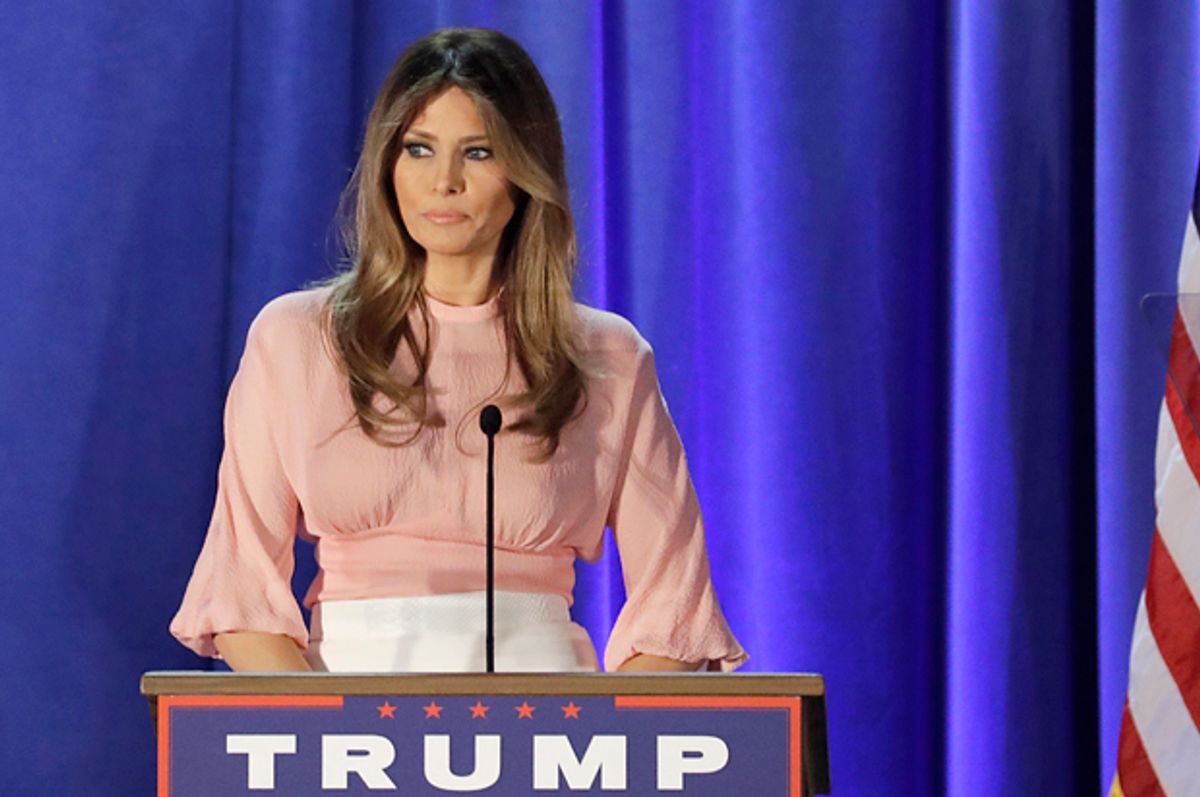 Melania Trump gave her first speech on the campaign trail, but it appears to be far too little, too late. The tone-deaf address she delivered in Berwyn, Pennsylvania, on Thursday showed why she is not a sympathetic or empathetic figure among American women and has the worst favorability ratings of any prospective first lady assessed by Gallup since 1992.

One major goal of hers has been to eliminate bullying. That Melania Trump would take on this cause while enabling perhaps the world’s most famous bully — it's no wonder that she’s failed to help her husband close the cavernous gender gap, which could very well be why Republican presidential nominee Donald Trump will lose on Tuesday. “Our culture has gotten too mean and too violent,” Melania Trump told the crowd in the suburbs of Philadelphia. “It is never OK when a 12-year-old girl or boy is mocked, bullied or attacked. It is terrible when that happens on the playground and it is unacceptable when it’s done by someone with no name hiding on the internet.”

Perhaps no hollower words have ever been spoken, even in the political sphere where empty promises and sentiments are rampant. Melania Trump would have been better off repeating the plagiarized passages from her convention speech. Before her convention speech, Melania Trump’s net favorable rating of -4 points was already significantly lower than the next-lowest one: the 12 percent garnered by Teresa Heinz Kerry, wife of former Democratic presidential candidate John Kerry. (Real Clear Politics defines net favorability as "the percentage of voters who view a candidate unfavorably subtracted from the percentage who view him or her favorably.")

Almost all other prospective first ladies have been viewed favorably by more than one-third of Americans and unfavorably by a quarter or less. Not surprisingly, after her convention speech, Melania Trump's scores did not improve. No doubt this negativity directed toward Melania is a reflection of the strongly negative feelings toward her husband. Many American women (including Facebook executive Sheryl Sandberg) would agree that marriage is the most important choice one can make. What does this say about Melania Trump, a woman who knowingly married a man who jokes about his own daughter as “a piece of ass,” whom he wants to date? What does this say about the judgement of a person who voluntarily entered into marriage with a twice-divorced misogynist who brags about sexual assault?

Contrast this with the powerful rhetorical skills of the woman she plagiarized: Michelle Obama, with whom I disagree about most policies, is an undeniably popular and articulate advocate for her husband. Contrast this also with other former first ladies like Laura Bush and Nancy Reagan, who tackled substantive policy issues while in the White House.

Melania Trump, an immigrant from Slovenia, never seems to grasp the concept of American exceptionalism that underpins the traditional Republican ethos. She never speaks of where she came from, of the deep historical struggles in her homeland and the sacrifices people made to overcome the economic effects of war and socialism in her former country. She offers no substance; there are no references to improving global understanding when she speaks, only to glitzy European modeling. She is built for high-end fashion, not for high stakes world of politics.

Perhaps the greatest irony of Melania Trump’s speech on Thursday is that by choosing to speak, she reminded us that she can, highlighting the fact she's been muted, mostly serving as a silent, statuesque, unsmiling presence on the campaign trail. Ultimately, though, it seems likely Donald Trump doesn’t care whether Melania Trump speaks or not. He doesn’t care much for what women have to say.