The Chicago Cubs should have stayed cursed: Their World Series win is one of the worst things that could happen to baseball 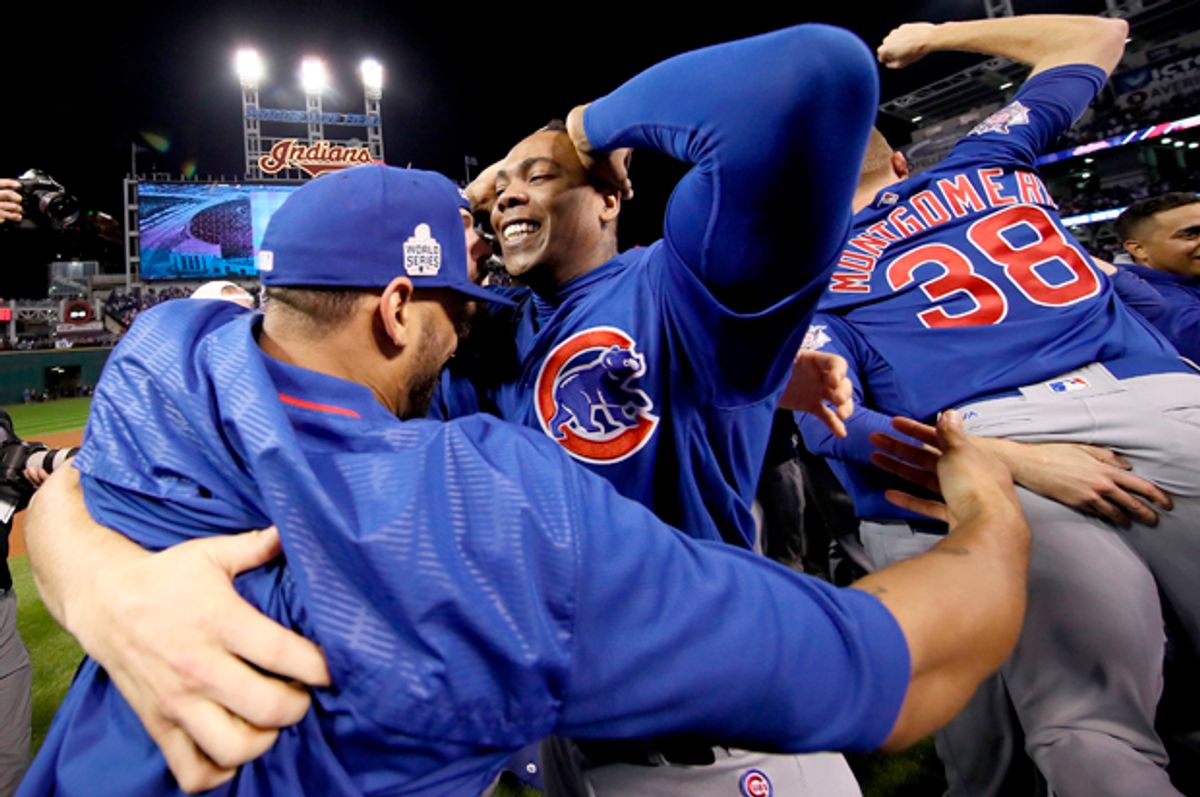 Baseball is a sport that has been governed by the myths and legends surrounding it nearly as much as by what goes on between the two white lines. The immortals like Babe Ruth, Willie Mays and Joe DiMaggio will live longer in the history books than they did on the grass upon which they played.

And at the center of all the mystique: the Chicago Cubs. The cursed Chicago Cubs. The lovable losers — the Charlie Browns of Major League Baseball, who could never kick the football, no matter how much they tried.

According to baseball legend, the team has been cursed since 1945, when the owner refused to let a billy goat into the stands for a World Series game. From then on, the Cubs were destined to fall short of reaching the Fall Classic, and time and again, they failed spectacularly.

In 1969, the Cubs were in first place late in the season — but then an ominous black cat sauntered in front of their dugout during an August game against the New York Mets; the team collapsed down the stretch, while their opponents surged to a World Series title, becoming the "miracle Mets," thanks to the Cubs' misfortune.

In 1984, a first baseman let a baseball go through his legs late in the deciding, winner-take-all game. In 2003, the team was five outs away from a return to the World Series before an infamous event known as the "Steve Bartman incident" triggered its epic collapse.

Just last year the Cubs were tormented by the Mets — again, the Mets! — in the National League Championship Series. One of the best teams in the league, the Cubs were four games away from a trip back to the Fall Classic and were favored over the Mets. But Mets infielder Daniel Murphy — that fated 1945 goat was named Murphy, by the way — was otherworldly, hitting four home runs in a four-game sweep that turned out to be among the most one-sided league championship series in baseball history.

Until Wednesday, the Cubs' two World Series championships, in 1907 and 1908 — when the team was just a few years old — seemed to be destined to be the only trophies on the team's mantle.

In some ways, baseball is a weird sport, one that plays out like a myth in a world where myths should not exist. It's been 108 years since the last Cubs title. And even for someone who doesn't believe in the surreal, the link between the championship drought and the 108 stitches on a baseball should raise some goose bumps. The Cubs' numerology in winning the World Series puts them in the same ranks as their formerly cursed counterparts: the Boston Red Sox.

Once suffering the "Curse of the Bambino," the Red Sox were also barred by baseball's cosmic force from going to the World Series. The curse took effect in 1918, after the Sox traded away the legendary Babe Ruth to the then-up-and-coming New York Yankees, a team that had just emerged five years earlier. In 1918, the Red Sox had five titles under their belt, with four of them earned during the eight years prior. The Yankees had none. But when the Red Sox traded Ruth to the Yankees — according to legend, it was so the team's owner could fund the Broadway production "No, No, Nanette" — both teams' fortunes flipped.

The Red Sox made the World Series four times and each time fell to the fortunes of fate. In 1946 late in the winner-take-all Game 7, the St. Louis Cardinals triumphed when outfielder Enos Slaughter scored from first base on a play that would come to be known as the "mad dash." In 1975, despite the heroics of Carlton Fisk, who forced another winner-take-all Game 7, the Red Sox lost to the Cincinnati Reds. And in 1986, with a 3-2 series lead against the Mets — because of course, it's the Mets — and leading in the 10th inning, Boston first baseman Bill Buckner watched as a baseball went through his legs to end the game; the next night, the Red Sox blew an early 3-0 lead.

At the center of the Red Sox curse were the Yankees, who were there to bring fans back to reality when things were grim: In 1978, New York won a one-game playoff to win the division. In 2003, the Yankees overcame a late deficit in Game 7 of the American League Championship Series then hit a soul-crushing home run in the bottom of the 11th inning to send Boston fans home.

Ask Red Sox fans and you'll hear stories about how the team was  cursed.

But baseball is a weird sport. In 2004 — 86 years after Babe Ruth was traded and a year after Boston had been vanquished in the ALCS — the Red Sox beat their rival. They beat them by becoming the only team in history to overcome a 3-0 deficit to win four straight elimination games. The Red Sox went on to win the World Series that year and have added two more titles since — and their fan base will never let you forget it.

Is this what the Chicago Cubs are going to become?

Eventually — and it will probably be sooner than you think — the Cubs' bandwagon will be overcrowded and filled with people simultaneously waxing nostalgic and pumping chests. And it will be unbearable. They'll also be pointing to all those times they watched a game with their relatives.

This is my fear too: Chicago will go from lovable losers to the most obnoxious sports fans on the planet.https://t.co/zSHtdvsAuQ https://t.co/GVjpQMCwSO

It's not that the Cubs themselves are unloveable; actually far from it. The Cubs are one of the most likable teams in baseball now. They're led by the sage Joe Maddon, who could be compared to Einstein on a diamond. They have a great pitching staff. Wednesday's Game 7 featured a dramatic two-run home run from a man lovingly referred to as "Grandpa," who won a World Series title in his last game, hours after giving advice to a young blossoming superstar filled with nerves.

The core of their offense is led by two honest-to-God best friends, first baseman Anthony Rizzo and third baseman Kris Bryant. Their catcher, Miguel Montero, hit just .216 during the regular season but hit a now-legendary grand slam in Game 1 of the NLCS this year. And that batting average? He's able to laugh it off.

Do you guys remember my BA in the regular season ? Who cares lmao

The team's core is primed for a long — if healthy — career as centerpieces of the Cubs' franchise for years to come.

If there's a moral of the story, it's that baseball players can become human, and legends can actually end. Ty Cobb turned out to be a racist. Babe Ruth's home run record was broken by that of Hank Aaron, who shattered a racial barrier in doing so. His all-time record was shattered by a suspected steroid user. And Ernie Banks, the ever-enthusiastic face of a Chicago team once cursed, is now an exceptional shortstop who played for a bunch of terrible teams.

The Cubs have graduated from being a cursed team to a once-cursed team. There are no more curses. Like every team, the Cubs are going to have peaks and valleys — years in which they go on a run and years in which their seasons will be forgettable. But they won't be fighting history anymore.

After Wednesday, the longest drought in baseball now belongs to the team the Cubs beat, the Cleveland Indians. But 1948 isn't the new 1908. The Indians aren't cursed, even though some writers want to say their racist team name and logo has cursed them.

In March, 30 teams will vie for a World Series title. By the end of September, 10 teams will still be alive, fighting for their chance to be one of the last two teams playing the last game of the year in late October or early November. For the first time, we can honestly say that the Cubs will have a realistic chance because history has freed them.

On Wednesday night, Sisyphus has placed his boulder perfectly atop the hill. His work is done. What can we believe in now?