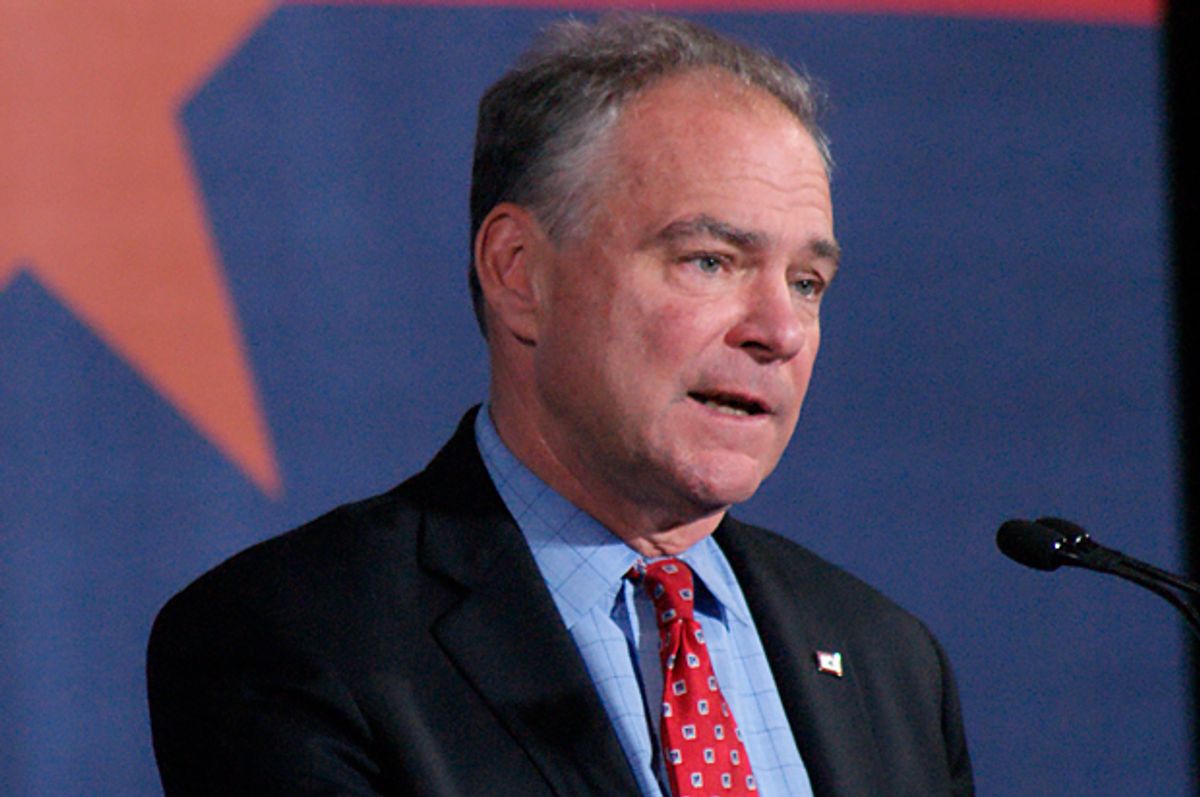 PHOENIX — One day after Hillary Clinton rallied Arizona Democrats in Tempe, Arizona, her running mate Tim Kaine came to Maryvale, a predominantly Latino neighborhood of Phoenix, to lean hard — very hard — on Latinos to turn out. The venue that the campaign chose for Kaine’s appearance was decked out with hand-painted signs saying things like “Bienvenidos a Arizona” (welcome to Arizona). The opening act for the festivities was an all-female mariachi band playing the classics of the canon.

The lectern behind which the candidate gave his remarks featured the Spanish-language version of the Clinton campaign slogan, “Juntos Se Puede” (Together We Can). Labor Secretary Tom Perez warmed up the crowd of about 150 by saying Latinos were going to send a message to former governor Jan Brewer. She had said a few days earlier that Latinos in Arizona don’t vote. “El mensaje es muy, muy fácil,” Perez said. “Latinos en Arizona votan.” (“The message is very, very simple: Latinos in Arizona vote.”)

And most notably, Kaine delivered his remarks entirely in Spanish.

Much has been made of Kaine’s proficiency in Spanish, which he learned while living in Honduras as a Catholic missionary in the 1980s. He’s put it use mainly in interviews with Spanish-language media and the occasional bilingual aside in campaign remarks.

As Kaine himself will tell you, he isn’t the strongest of Spanish speakers; he’s pretty good if you give him a prepared text and time to think over what he’s going to say. When speaking extemporaneously, his grammar sometimes falters and he searches for words. (I’m not judging, mind you. I know where he’s coming from; my own Spanish is on that same level.)

But the ability to speak Spanish is a political asset of dubious and often overrated value. You can be as fluent and poetic in your Hispanophone capability as Pablo Neruda; it won’t matter much if Latino voters don't like what you have to say.

Maria Elena Alvarado, a 24-year-old supermarket clerk in Phoenix, told me that she isn’t voting for anyone this year because she thinks Democratic presidential nominee Hillary Clinton is corrupt and her Republican rival Donald Trump is “demasiado tonto” — too dumb.

I asked her if a Spanish-language speech from Tim Kaine would change her mind about voting, and she was circumspect. “The Latino community — yes, we care that they speak the language but more that they know how to do the job,” she told me. “There are more important things than speaking the language.”

Kaine’s pitch goes beyond the novelty of a major-party White House candidate delivering campaign remarks in a non-English language. He frames Spanish as a fundamental element of American history, noting that it’s been spoken on this continent since the Spanish colonization of the 16th century.

And he draws links between his Spanish education and his own moral development. “What I learned in Honduras,” Kaine said in his remarks, “can be summed up in three concepts: faith, family and hard work. I also learned those values from my Irish Catholic family in Kansas City.”

Maria Barrios, a school administrator from Phoenix who attended the Kaine event, said it wasn’t personally important to her that the candidate spoke in Spanish. But what Kaine said about his background stuck with her. “The values,” she said when I asked what she liked about the vice presidential nominee. “It’s very important for me. I’m Catholic as well, so to me that’s very big.” Regarding Kaine’s mantra about faith, family and hard work, she said: “That’s us.”

The speech was also an opportunity for Kaine to take some hard swings at Trump, who is shaping up to be less popular among Latinos than any Republican candidate in recent memory. Kaine lit into Trump for attacking former Miss Universe Alicia Machado and Judge Gonzalo Curiel, and he needled the Republican nominee for conducting “Latino outreach” by tweeting a picture of a taco bowl.

Kaine also brought up an issue that has received tragically little attention this cycle: Trump’s promise to deport American citizens. “He’s going to deport 11.5 million undocumented persons, but he also wants to revoke the citizenship of 4.5 million people born here to undocumented parents and deport them also,” Kaine said. “That goes against one of the most important values in our Constitution: A person born here is a citizen.”

When the speech ended, I spoke with some of the people in attendance to see how they felt about half of a major-party presidential ticket delivering a campaign address entirely in Spanish. A good number were appreciative of the effort and thought it reflected well on Kaine. “I think it’s wonderful,” said Ernest Gomez, a retired bus driver who understands (but doesn’t speak) Spanish. “I’ve been following politics for a long time, and it’s good for them to come to our neighborhoods.”

Herman Sanchez, a retired engineer who had already cast his ballot for Clinton, thought Kaine’s speech was “great” but he was “disappointed with the crowd," he said. "It’s too small," he added. "We should have had a packed building.”

When I asked how he felt about the VP nominee coming to a neighborhood like Maryvale to campaign in Spanish, Sanchez cast it as a posing a new challenge and a source of motivation for his community. “I think it’s great,” he said. “If they have the time and energy to speak our language, we should have the time and energy to go out and work for them.”