Think the economy is terrible? Pay attention to the statistics 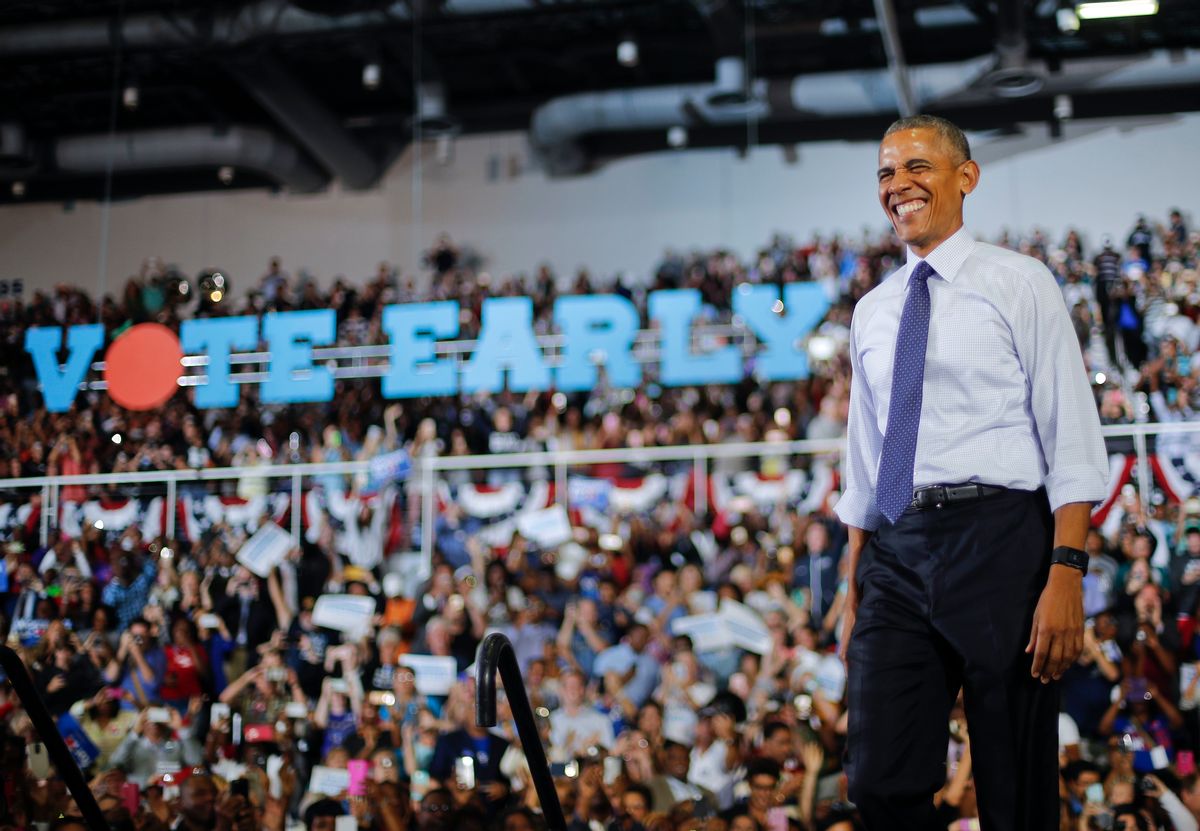 President Barack Obama smiles as he arrives to speak at a campaign rally for Democratic presidential candidate Hillary Clinton, Thursday, Nov. 3, 2016, at the University of North Florida in Jacksonville, Fla. (AP)
--

WASHINGTON — U.S. employers added a decent 161,000 jobs in October and raised pay sharply for many workers. It was the final major report on a lukewarm but durable economy before Americans choose a new president next week.

The Labor Department's monthly employment report Friday sketched a picture of a durable job market. The solid pace of hiring helped cut the unemployment rate to 4.9 percent from 5 percent. And average hourly pay took a big step up, rising 10 cents an hour to an average of $25.92. That is 2.8 percent higher than a year ago and is the sharpest 12-month increase in seven years.

The pickup in pay follows a substantial increase last year in earnings for the typical household. The economy appears to be finally delivering widespread raises after years of sluggish pay gains. With the unemployment rate near healthy levels, businesses are likely having to try harder to attract workers.

When businesses are forced to offer higher pay, they may raise prices to cover the costs, potentially boosting inflation. That dynamic has helped make it likely that the Federal Reserve will raise short-term interest rates when it meets next month.

"With hourly earnings up 2.8 percent year-over-year, the fastest since the crisis, workers are sharing the benefits," said Jed Kolko, chief economist with Indeed, the job site. "If you wanted to show that the economy is still getting better for the typical voter, this report gives you what you needed."

Still, the economy is growing at the slowest pace of any in a recovery since World War II. Growth picked up to a 2.9 percent annual rate in the July-September quarter, the government has estimated, much faster than the 1.1 percent pace for the first half of the year. But most analysts foresee only modest expansion in the October-December quarter, leaving growth at an anemic rate of about 1.8 percent for all of 2016.

Hiring in October was led by professional and business services, a category that includes mostly higher-paying jobs in engineering, accounting and information technology. Those added 43,000 jobs, followed by health care firms, which gained 39,100.

One surprise was in the retail sector, which shed 1,100 workers last month, a time when hiring typically ramps up for the winter holidays.

The unemployment rate fell in part because many of those out of work stopped searching for jobs and were no longer counted as unemployed. Their exodus lowered the number of unemployed by 150,000 to 7.8 million and pushed down the rate. The proportion of Americans who either have a job or are looking for one fell slightly.

Consumers — the U.S. economy's primary fuel — are showing some staying power, even though their spending slowed in the July-September period. Consumer spending did rise at a robust pace in September alone.

Much of that spending was on higher-priced items, including cars and homes. Auto sales are running close to last year's record high of more than 17 million. And while home sales have leveled off this year, they have done so at a nearly healthy level of 5.5 million.

Businesses, though, have been cutting their spending on machinery, computers and other equipment. They have reduced such spending for the past four quarters — the longest such stretch since the recession officially ended in mid-2009.

Manufacturers cut 9,000 jobs last month and have shed more than 50,000 in the past year. That slowdown may reflect jitters about the election and uncertainties about the next president's economic policies.

The cutbacks have slowed factory output for the past year. Orders for manufactured goods have dropped 2.3 percent in 2016 compared with last year. That's a big reason factories have shed nearly 50,000 jobs in the past 12 months.