Without telling the public, the U.S. started and ended a new bombing campaign in Libya

U.S. conducted 367 airstrikes in Libya over three months, then quietly stopped, holding no briefings or hearings 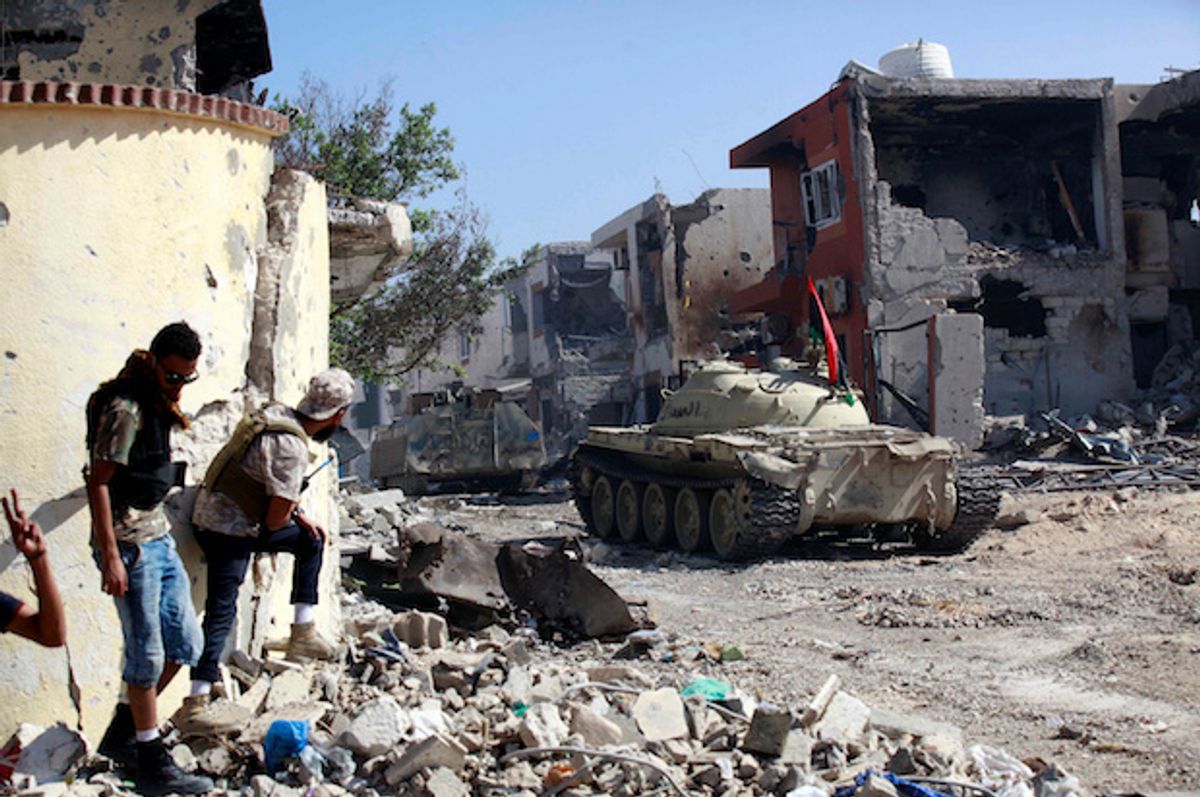 Fighters of Libyan forces allied with the U.N.-backed government take cover during a battle with Islamic State militants in Ghiza Bahriya district in Sirte, Libya, on October 31, 2016 (Reuters/Hani Amara)
--

The United States was bombing Libya again, although you might not have known it. And you wouldn't be the only one — the U.S. government launched the war in August without telling the public.

Then, on Oct. 31, the U.S. quietly ended the bombing campaign, once again without notifying its own citizens. The only reason we know this is because anonymous U.S. defense officials told Fox News that the war had wrapped up.

Micah Zenko, a senior fellow at the Council on Foreign Relations, noted that there was not a single White House, Pentagon or State Department briefing on the three-month bombing campaign, nor was there a congressional hearing.

From Aug. 1 until the end of October, the U.S. military conducted 367 airstrikes in Libya. Its goal was to beat back militants from the Islamic State, who seized control of the city Sirte, establishing their largest so-called caliphate outside of Iraq and Syria.

ISIS has exploited the chaos wrought by the U.S.-backed 2011 war in Libya. NATO carried out a regime change operation to topple longtime strongman Muammar Qadhafi, effectively destroying Libya's central government in the process, plunging the oil-rich North African country into chaos and a civil war from which it is still reeling.

Zenko said it is appropriate that this bombing campaign "will end as a began, by leaks from anonymous DOD officials."

When U.S. officials told journalists about the new, unilateral bombing campaign in Libya in August — which got little, and inadequate, attention in the media — the Department of Defense said it would take just a few weeks. President Obama twice approved to extend the bombing campaign by an additional month.

Obama himself had personally authorized the open-ended war, using the George W. Bush administration's 9/11-era legislation the Authorization of the Use of Military Force, or AUMF. (Today, some lawmakers are calling for the AUMF to be repealed, describing it as a "blank check for endless war".)

Citing U.S. defense officials, Fox News reported that some airstrikes in Libya were conducted using Marine Harrier jets and Cobra attack helicopters, but the majority were done with drones.

A senior Pentagon official told Fox News that the U.S. military has not ruled out more bombing in the future, and will “continue to provide military support to the GNA," the Government of National Accord, Libya's internationally recognized but dysfunctional, even ineffectual, putative government.

U.S. special forces have also been on the ground in Libya for months. They, too, were deployed without notifying the public.

Before the 2011 regime change operation, Libyans had one of the highest standards of living in all of Africa. Today, three different governments claim authority in Libya, and small militant groups, many of which are extremist in orientation, are battling for control of swaths of the country.

A report by the British Parliament, released in September, showed that the 2011 NATO war in Libya was based on an array of lies.

The Libyan people have suffered the most in the aftermath. Thousands have been killed, and millions have been displaced. By 2014, 1.8 million Libyans — nearly one-third of the country's entire population — had fled to Tunisia. Many more have sought refuge in Europe. The destruction of Libya has further fueled the worst refugee crisis since World War II.

Libya was the seventh Muslim-majority country the Obama administration was bombing. In 2015, the U.S. dropped 23,144 bombs on the other six countries.

In several of these countries, such as Somalia and Pakistan, the U.S. has not even officially declared war. The U.S. is also bombing ISIS in Iraq and Syria, while backing a Saudi-led coalition's brutally destructive war in Yemen, and continuing covert drone bombing there. In Afghanistan, the U.S. war just entered its 16th year, while civilians continue to suffer.

In post-9/11 America, war has become a non-issue — commonplace, quotidian, not even discussed in the presidential election. The U.S. government quietly begins, conducts and ends wars, without input from the public.