A mandatory corporate HR exit interview for Donald Trump, on his way out of the role of candidate for president 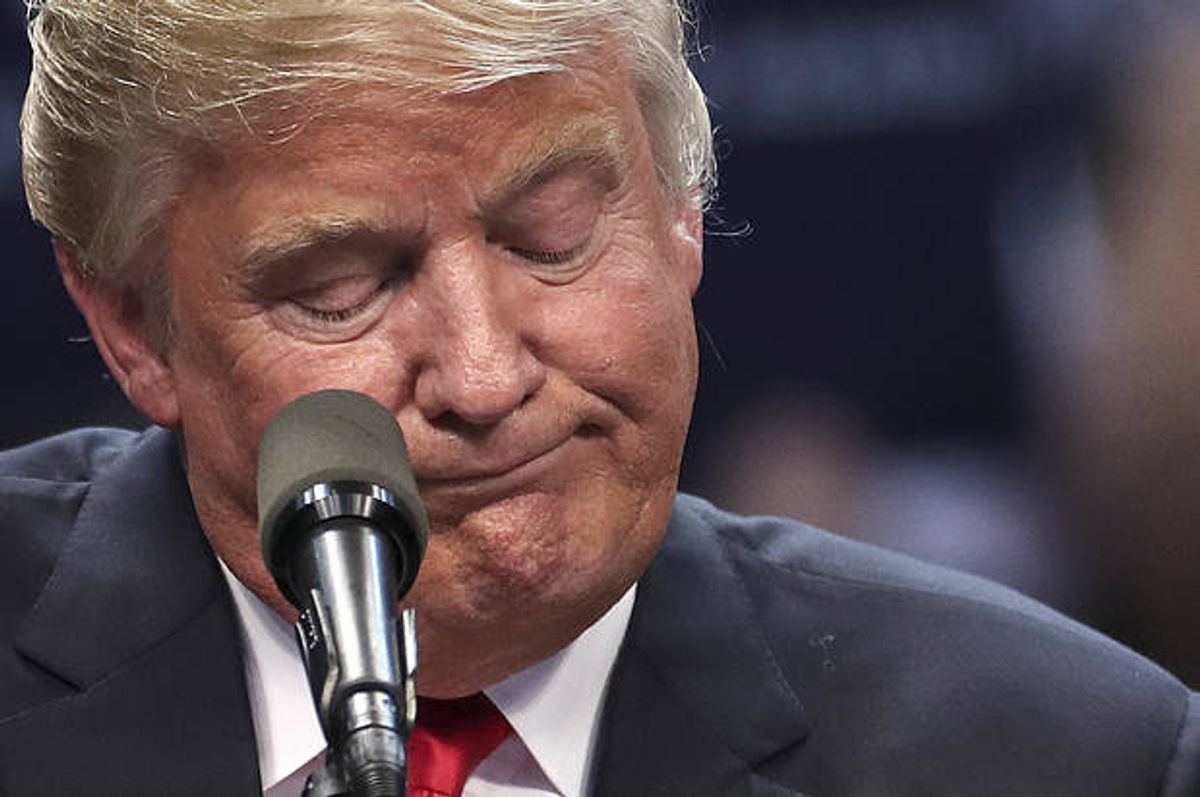 (The following requisite exit interview with Donald J. Trump was conducted close of business Friday with the Head of Human Resources.)

HR: Why are you leaving?

Donald J. Trump: What you should ask yourself is why are you leaving me? By the way, I called that first question back in February. Ask anyone. People who thought I’d leave after Iowa. Iowa. Whose idea was that? Seriously. You know what I just found out? I just found out cows cannot digest corn. Neither can humans, but we eat cows. We don’t eat each other. Not yet. You watch. It’s gonna happen. January 21, 22 at the latest. It’s gonna be like the Lord of the Rings of the Flies. It’s gonna be like Jeffrey Dahmer. You remember Jeffrey Dahmner? Jeffrey Dahmer, who, by the way, would have endorsed me if he hadn’t been shanked in the shower during the ’90s. And let me tell you something else. Those showers have only gotten worse. They’re a nightmare. What kind of country do we live in when people are afraid to take a shower?

So, shower safety and the fact that cows cannot digest corn. Those are your main reasons for leaving?

Well, they’re up there. But I would say, if I had to say specifically, and I’m not big on that, and I’ll let you know, but if I had to say specifically, it’s that some people weren’t nice. And that rally attendance wasn’t factored into the vote total. It’s called the popular vote. Popular. It’s not called the qualified vote. Popular vote. Popular. I didn’t name it, but I respect it. I guess I’m alone. And why isn’t attention the same thing as support? Why? If I’m talking and – excuse me, excuse me – if I’m talking and you’re paying attention, why doesn’t it stand to reason – excuse me – why doesn’t it stand to reason that makes me your leader? And another thing. If I had the job, Day One, the showers are much safer. Hillary Clinton would not get shanked. She would be free to serve every day of the next 25-30 years in Attica. Yeah, Attica. She did nothing for Upstate New York, and yet she gets free room and board up there. Why? Because unlike some people, I’m nice.

Was salary a consideration in your decision?

I just found out what the job paid. $400,000. You’re kidding, right? That’s bobby pin money for me. That’s what I spend on Rosetta Stone upgrades for Melania. That’s what I made off headset and wi-fi rental on the press plane. Hell, I promised twice that to Mike Pence if he changed his conversion therapy from sexual orientation to ruble laundering. Who came up with that figure? $400,000? What am I, some undocumented utility infielder? Nobody told me this $400,000. I just assumed you grab the key to The Mint from the Treasury Secretary, or Lorne Michaels, and take what you when you need it. You know, within reason.

Did you receive proper training?

I don’t know, you tell me. You know what? Why don’t you ask Hillary if she cares that cows can’t digest corn?

Why did you think about the culture of your department?

One night, we were on the plane coming back from, I don’t know, New Mexico? I can’t remember. It was some place where they didn’t show the crowd. That narrows it down to 48 states. By the way, bad name, New Mexico. Bad name. Call it something else. Call it New and Improved Mexico. Santa Fabulous. Trumpequerque. I would have come up with something, but they went with the JV. So, we’re on the plane and there’s no ketchup. None. And I have about 200 extreme vetted French fries in front of me. This is a giant screw-up. I start to lose my temperament, but someone, I think it was David Duke’s teenage daughter, Chrystalnacht, says, “I have, like, six packets of blue cheese dressing. You ever, like, try that?” Well, Trump hadn’t, and Trump did, and Trump never looked back. Neither have I. That’s the kind of stuff we had going on and it's now everyone’s loss, like me renaming New Mexico.

What was your opinion of our benefits, fringes, time off?

Not thrilled, not impressed. Not thrilled with the way other people take your words, reprint them exactly as you said them, in the correct context you said them, then throw them back at you. That’s freedom of speech? I don’t see any freedom there. Speaking of words, I’m big on words, since when is there a “c” in “indictment?” When did that happen? That needs to go. Are those the benefits you’re talking about? Or are you talking about pledging money to your campaign and finding out that it’s not the same as pledging money to some charity you have no intention of following through on? That kind of benefit? That is no more of a benefit than if you’re a cow and you say “I’m hungry” and some loser in Iowa gives you a bunch of corn.

Excuse me, I can just hear you. I’m a clairvoyeur. I can just hear you thinking, “Talking cows? Really? He doesn’t mean talking cows. He means fat women. He means the first three rows at the Grand Ol’ Opry.” I didn’t say that, you thought that. And let me ask you something. When was the last time they showed the crowd at the Grand Ole Opry? Nothing to say? Yeah, I thought so.

And did you actually mention “time off?” You didn’t say “time off,” did you? I got zero. Zero. The only time off I got was when I gave my phone to my kid for six hours and he got into a Twitter fight with that overrated singer Raffi. I’m not gonna lie to you. That got away from me. I said, “Barron, I know he’s an Egyptian, but this is a disaster.” And Barron said, “Excuse me, but what are you talking about?” Turns out it was Eric who took the phone. Wrong kid.

What was the other thing? Fringes? Yes, I have to say I was very pleased with the fringes.

Would you recommend this to a friend?

That’s not how it works. Here’s how it works. You recommend one of your friends to me. A non-smoker with a great rack wearing only a non-disclosure agreement.

Is there any area or areas we could improve to make you consider staying?

Who says I’m leaving? You’re the one who’s leaving. But I would say cyber as an area. Cyber is a real situation. Ask yourself, why wasn’t I hacked? What, am I not attractive enough? Wait. You think I meant that? It’s called sarcasm. Calm down. Take a shower. Oh wait, I forgot. You’re afraid to shower. I don’t blame you. No, wait. I do.

How about how I stayed on message and talked in the calm, reassuring voice? Come on, give it to me.