Don't do it, Hillary. The growing cry for Huma Abedin's head must be ignored 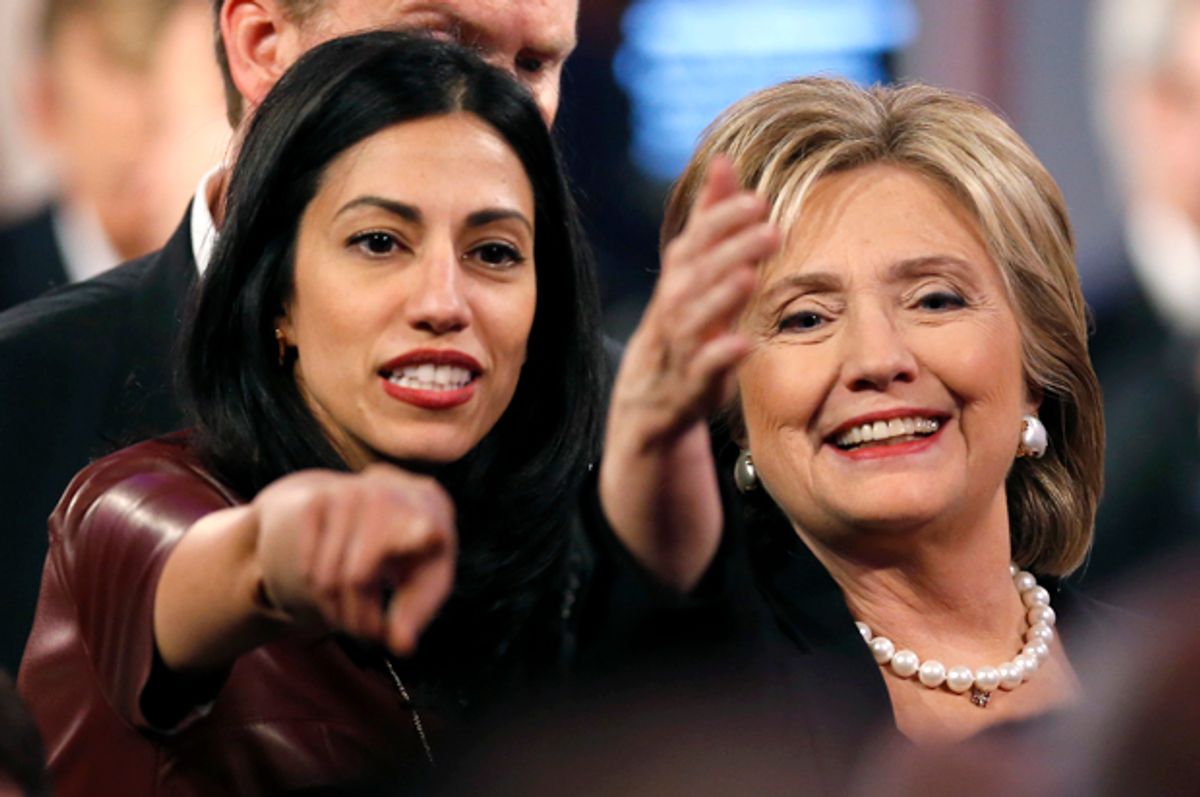 Embattled Hillary Clinton aide Huma Abedin loves fashion. You can see it in those spiky stilettos, the fitted camel hair coats, the flirty floral frocks cinched tightly at the waist and, of course, the trademark red lipstick. In her entire career, Abedin has given interviews a total of three times — twice to Vogue and once to a Vogue writer at the New York Times Magazine. I was the first to profile her for that magazine in 2007 when editor-in-chief Anna Wintour spotted her at a Hillary event and thought she’d be a good story.

Wintour was right. Abedin, a carefree 30-year-old singleton, was a fascinating mixture of ambition and humility, a woman so in thrall to Hillary Clinton’s vision she had happily put her own life on hold in order to serve her remarkable mentor. She declined to comment on her love life, but readily took me to her sleekly modern Washington, D.C., loft, where the only food was a massive chocolate medallion, a piece of political swag from Bill Clinton. She even gave me a tour of her closet and showed me the five-pound blow dryer that produces those remarkable waves in her jet-black hair.

Nobody has ever had that kind of access  again. To this day, I get calls from wistful bookers at CNN begging me to come on their shows and discuss her. “You’re the only one who has talked to her!” they say. It’s an easy no. It’s been almost 10 years since I laid eyes on her; I’d feel like a jerk holding forth on her inner life.

But now I am going to be a jerk and hold forth because Clinton’s last-minute drop in the polls is being blamed on the discovery by the FBI of 50,000 Clinton emails on Abedin’s estranged husband’s computer. The knives are out. Until now, everybody loved Abedin. Well, not Senator Charles Grassley, R-Iowa, who has been hounding her like a two-bit Midwestern Javert over some salary issues for the last three years, but Democrats adored her. Everyone I spoke with called her smart, loyal, hardworking, polite and sincerely humble, as happy to carry Clinton’s coat as she is to parse policy.

So how did such a golden girl end up married to the hot mess of Anthony Weiner? To start with, she is a devout Muslim who spent much of her early life in Saudi Arabia, a country where women’s rights are severely restricted and premarital romantic dalliances are next to impossible. She went to college in the United States, but she was not the kind of girl to spend Friday evening at Señor Loco’s happy hour. She didn't drink then. She doesn't drink now.

At 19, she interned in the White House for Hillary Clinton, thus beginning  the closely entwined dyad now being played out in this presidential election. Abedin is so thoroughly enmeshed in the intricacy of her boss’s life, Bill Clinton himself has complained he has to go through Huma to find Hillary.

But the former Secretary of State is no ordinary boss. Ambitious young women are always counseled to “find a mentor” to get ahead. In Hillary Clinton, Abedin landed the mother of all mentors. By then, Clinton’s own daughter was grown and out of the nest, so Clinton was free to travel the world — to this day, she holds the record for countries visited (112) as secretary of state, and Abedin, who had not yet married or had children, was by her side for much of that time.

When I interviewed the designer Oscar de la Renta, who often hosted the two at his palatial spread in the Dominican Republic, he complained about how the two would constantly work even though they were supposed to be on vacation. “The emailing!” he lamented. Then he said something I never forgot. “Huma,” he observed, “is much too pretty to have no life.” The remark makes you wince on so many levels -- ugly girls don’t deserve a life? But he had a point. Even if you are working for  the most fascinating woman in the world, it is still her life. Her history. Her choices. In order to learn life’s hard lessons, you need to make your mistakes in the first person.

Looking at Anthony Weiner now -- the braggadocio, the hubris, the perversions -- it’s hard to see what Abedin ever saw in him. But a decade ago, I suppose the bad-boy swagger had its appeal, especially since his rhetoric was about justice for the poor. Thing is, you date the bad boy for a few months, and then move on. You don’t marry him. If Huma had been living in one place, running the gauntlet of dating in her twenties, she probably would have come to that conclusion on her own. But when you’re living on the road, out of a suitcase, normal life is impossible.

The cruelest part of this personal-made-political predicament is, Abedin’s first impulse was to avoid Weiner. According to an article in Vanity Fair last year, it was Hillary who urged those two young people “to go out and have fun.” I’ll bet there’s not a sentence in her life she regrets more.

Having spent her entire adult life in the service of Hillary Clinton, I can’t imagine the anguish Abedin must be feeling these days over those emails. But I do know this: If Hillary is contemplating dumping Huma, she'd better think twice. At the risk of sounding like a divorce lawyer, Abedin has given her life to Clinton.  Loyalty extracts its price on both sides.

When the Anthony Weiner scandal first broke, there were those in Washington who whispered it might not have happened had his wife ever been around. Can you imagine the same being said about a woman cheating on her globe-trotting husband?