Kim Gordon on Body/Head and the election: "I can’t wait for it to be over, but I’m afraid of what’s going to happen"

The former Sonic Youth bassist talks to Salon about her latest music, her love of art and the presidential race 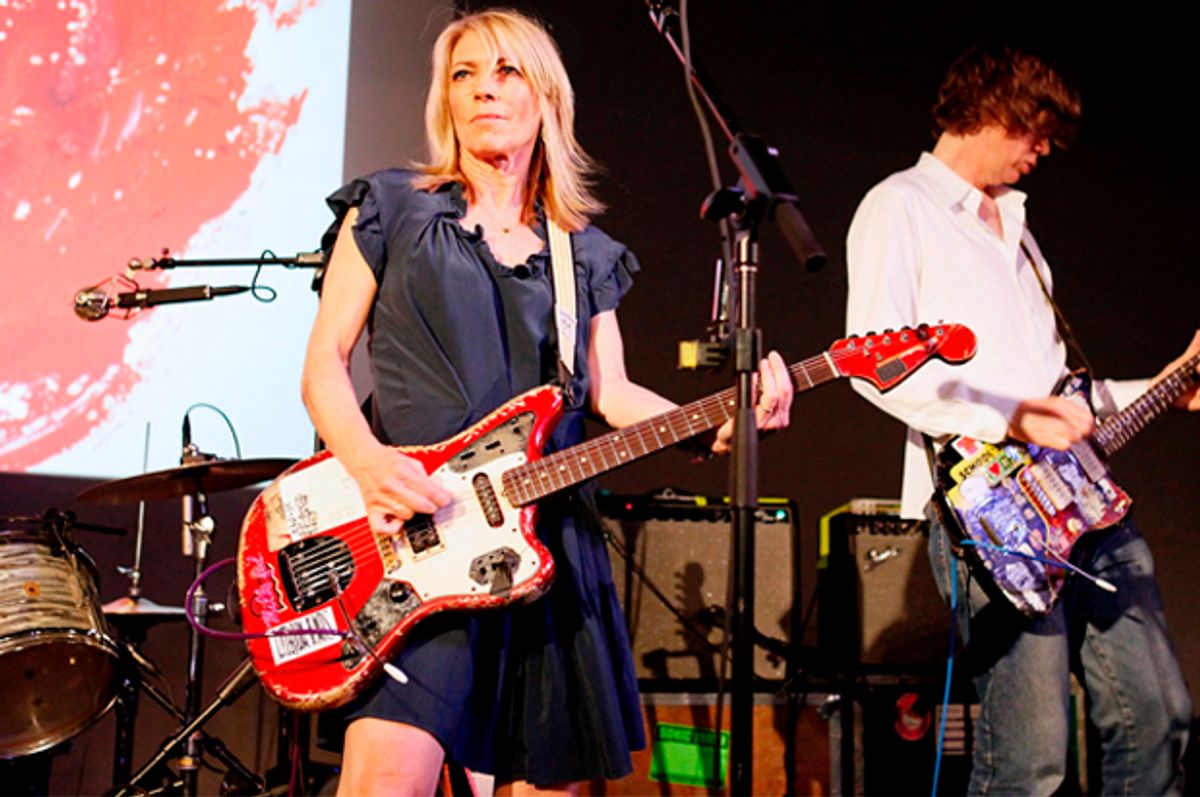 Kim Gordon has been a hero to music fans since her days playing bass with Sonic Youth, the groundbreaking and long-lasting New York-born band that blended melody with exquisite noise. But her story has become more complicated since she and SY guitarist Thurston Moore split up after almost two decades of marriage.

The last few years have seen the group’s subsequent hiatus, her penning of a much-read memoir (“Girl in a Band”) and a return to her childhood home, Los Angeles. (While the band is associated with New York City, Moore, Gordon and their daughter had lived for years in western Massachusetts.)

With experimental guitarist Bill Nace, Gordon formed the improvisatory duo Body/Head, which is releasing its second album, a live recording called “No Waves” next week. “No Waves” was recorded live in 2014 at the Big Ears Festival in Knoxville, Tennessee, and features a cover by artist Raymond Pettibon, who is well-known for his artwork for albums by Black Flag and the Minutemen as well as Sonic Youth. Gordon, whose earliest roots were in visual art, also released a single under her own name titled “Murdered Out,” in September.

Salon spoke to Gordon who was at her home in Los Angeles. The interview has been lightly edited for clarity.

It’s a good season for your fans. You have a new Body/Head and a recent Kim Gordon single. How do the different musical directions work out? And will we see more solo Kim stuff?

Well the Body/Head project, our band . . . That has a life of its own. We’ll probably record a studio record next year. The more we play live, it creates new material. It builds layers, in a way, kind of forages things. So when we go into playing in the studio, it will have its own life.

As for me doing more things on my own, I’m not really sure what I’m gonna do about that. It’s different because there are drums, and I’m working with a producer. It’s just a different way of working — a producer.

How much of a structure or vision for a song do you go in with?

There is no structure or vision. You know, start, play, stop. There are some lyrical ideas I have that I’ll draw from going into a set. Sometimes there’s a contrast between me playing more song fragments or recognizable melodies with rhythms and Bill playing against that. And sometimes we’ll both be playing something dissonant — and then it comes together and then falls apart. So that’s kind of a structure!

You’ve been interested in experimental music, jazz, avant-garde music. . . . What are you listening to these days, and what do you think is inspiring you on this record? Obviously, musicians are inspired and influenced by what they’ve listened to over their whole lives.

I mean, I don’t know. I am listening to a lot more mellow music like [former Kurt Vile sideman] Steve Gunn, but I’m not sure how much I’m drawing on it. And there’s this band I like, Heron Oblivion. Again, I’m not really drawing on them, but I like them. It’s more like the accumulation of experiences and listening to different kinds of music.

I think you started out with an interest in visual art that predates your interest in music.

It’s more than that. It’s really what I did all my life. It’s why I moved to New York. I never had it in mind to be a musician; that was kind of accidental. And so I always tried to keep my hand in the art world, yeah. That’s how I see myself. I’m feeding that these days more than the music.

Are you going to see a lot of art and making a lot of your own? Did you go to the Cindy Sherman show at the Broad for instance?

You moved to L.A. about a year ago. Has coming back here had a big impact on you — the way you make music, the way you hear things? You’re from here originally, of course, but has coming back done anything to you artistically?

Um, I don’t know; it’s hard to say. I’ve always carried a bit of L.A. around with me. Kind of it’s always a place I like thinking about the most and writing about the most. And then when I came out here I started making art that looked like minimalist California art. [Laughs.] Maybe it’s accidental. Kind of had already started on the East Coast. It’s hard to tell about those kinds of things.

Yeah, can be hard to tell what’s really going on inside us at any point.

It’s more like a battle of . . . I haven’t lived in New York for so many years [since moving to Northampton, Massachusetts, in the 1990s]. It’s not like I was at the center of the art world.

I guess I worried I would lose touch out here even though the art world [here] is evolved and always growing; there are people you have a dialogue with. But I’m more strongly [tied to] New York.

But I also think of L.A. as a place where you lose yourself a little bit, and then you find something more interesting. . . . You’re not in a fishbowl; it’s not as formal.

It’s too bad you moved out here after the death of Mike Kelley [whose art provided the cover for Sonic Youth’s “Dirty” LP]. He was an important part of the scene here.

Is the election something you follow or has it been too scary to contemplate?

Yeah, I’ve definitely been following it, and it’s completely scary. You know, I want more. I want to hear the news, and then I feel like I’m not hearing anything. I don't know.

When hear you-know-who spouting off, does it make you want to turn it off? Turn it up? Get mad? There are all kinds of ways to respond.

I can’t deal with Giuliani! He’s like the Joker in "Batman." He really is this hideous figure. And uh, I dunno. I feel like a lot of people: I can’t wait for it to be over, but I’m afraid of what’s going to happen. Even if Hillary wins it’s gonna be a big mess and so many annoying things: Republicans threatening to block any Supreme Court nominees. These are people so threatened by any gun control, who defend the Second Amendment . . . and yet they are willing to tear apart the whole spine of democracy by acting like poor losers.

There’s a long history of musicians being really fired up about political developments — writing songs about Kent State.

Does politics drive you the same way as it did Buffalo Springfield, Dylan and so on? Does it give you energy and subject matter? Or is your inspiration more abstract.?

“Murdered Out” — that’s my political song. It’s about people who feel disenfranchised in the culture.

Yeah, that’s a problem that’s not going away, even as the various political candidates come and go. That one’s not going anywhere.

Well, you have a show here, a small tour for Body/Head. I wonder how you see things for yourself moving forward: Do you envision doing a mix of musical projects and visual art and curating? Do you think a diverse creative life would make you happiest?

Yeah, I guess so. I think I’m happiest being able to have an art show somewhere.

It’s good to make other work for yourself. For me, I feel like I’m always trying to get away from performing and music, but it keeps drawing me back in.

Speaking of being drawn back: Do you rule out getting back together with your old band? Is that a possibility?

It’s not on your mind these days?

Do you want to say anything about David Bowie before we go? Anything about his life or death? Did he mean a lot to you?

Oh yeah, David Bowie —  he was such an important influence on so many people who came up through the video age, like Madonna and . . .  He almost created the formula for that.

He almost took the entertainer thing and made it meta. I don’t know, his conceptual approaches, I think, are interesting — to making music.