Potty mouth: Would you drink recycled toilet water to save the world? (Psst, you may already be doing so)

As the water crisis deepens, cities are recycling the H2O we flush away and reclaiming it as drinking water 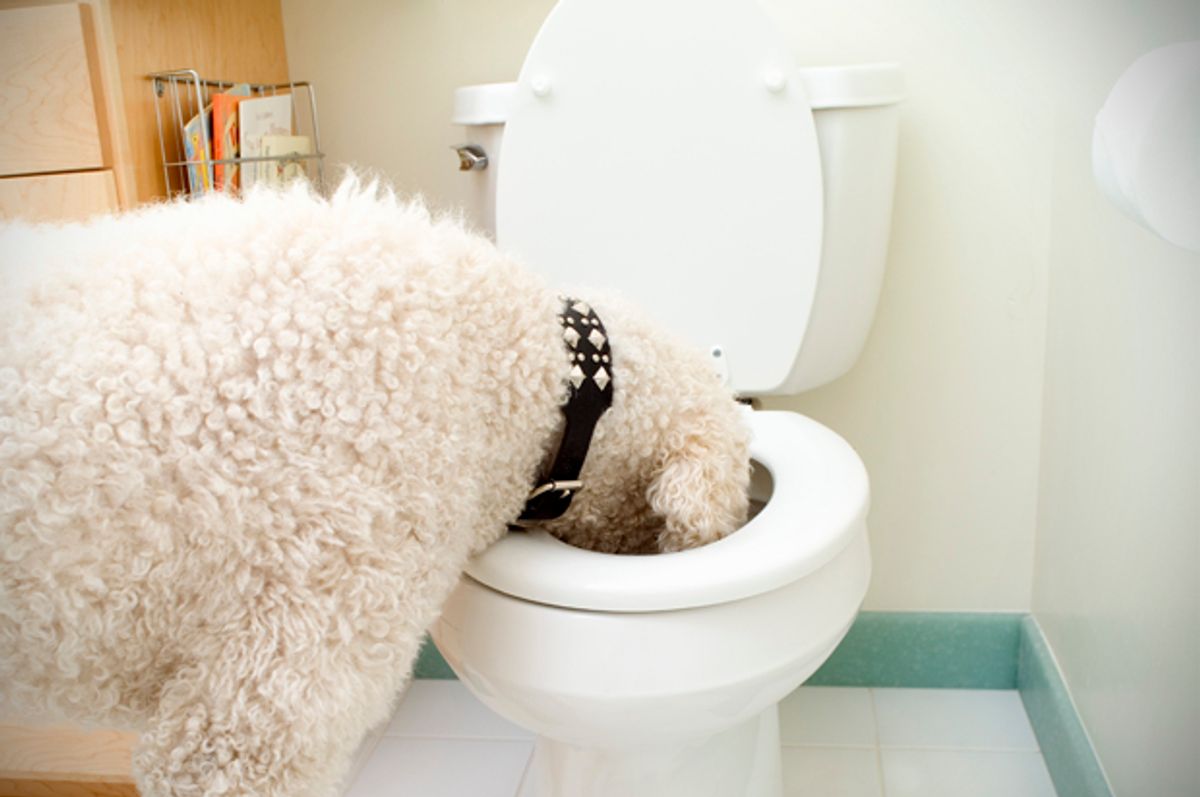 If spokespeople like Angie Harmon and Mark Ruffalo are any indication, the recycling movement has taken on a certain sex appeal. And yet, the thought of recycling our most vital resource — water — has traditionally been a major turnoff. Instead, we let H2O run down the drain, or flush it from view, where it is blessedly whisked away by the miracle that is modern plumbing, never to be thought of again. Only problem is, the solution to our global water crisis may be getting flushed along with it. According to the experts, our hope for a sustainable water future is circling the drain.

Hydrologists, environmental scientists and engineers agree: In order to ensure a growing population access to clean drinking water, we need to get creative. We may even need to turn to an unlikely place: the toilet. In the not-so-distant future, the water you flush might end up coming out your tap — if it isn’t already.

We're blowing through the clean water we have at an alarming rate. The average family of four uses 400 gallons per day in America, more than any nation in the world, and 27 percent of that is literally flushed down the toilet. Globally, the population is expected to balloon to nearly 10 billion people by 2050, while, according to the UN, our water usage is increasing twice as fast as population growth.

So we’re running out of water. And no single solution has emerged as a panacea. Desalination is expensive, requires a great deal of energy, and leaves us with more brine than we know what to do with. Harvesting rainwater is only an option in non-arid climates, where evaporation doesn’t outpace precipitation. And the popular California practice of manually recycling "greywater" — waste water from our tubs, showers, sinks and washing machines — for watering flowers and cleaning cars is not making a significant dent.

“California has passed laws making this reuse of greywater less onerous, and there are people who are excited about it,” David Sedlak, PhD, Co-director of Berkeley Water Center, told Salon. “But it’s turning out to be a very small part of the solution.”

But this doesn’t mean our household water isn’t an incredible resource. Typically, "greywater" goes down our drains and into the sewer system, where it mixes with "blackwater" (aka toilet water) and makes its way to a wastewater treatment plant for cleaning before being released into the ocean or environment. In some cities, it travels through purple pipes for the irrigation of golf courses and parks, the making of snow at ski resorts, or for use in industrial processes. But what if, in addition to this repurposing, our sewer water was treated until it was pristine enough to drink?

This type of recycling is already happening in Spain, Namibia and several Scandinavian countries. After a successful three-year trial in drought-prone Australia, treated sewage is expected to enter the Perth drinking-water supply by the end of this year. And in Singapore, half the water demand will be met this way by 2060.

In the Washington, D.C., suburb of  Fairfax, Virginia, Fairfax Water has received 5 percent of its water from purified sewage since the 1970s. In California, the practice has been in play for 25 years, but the state is doubling down as the drought worsens — last year, the New York Times reported on the $2.9 billion Pure Water Program that will provide a third of San Diego’s daily needs by 2035. And the $620 million Groundwater Replenishment System Plant in Orange County — the world’s largest — is producing up to 100 million gallons of purified sewer water per day, while Los Angeles has plans for an even bigger, $1 billion plant underway.

But it's Texas that has become America’s pioneer in potable potty water. The West Coast programs pump purified water back into the ground to replenish aquifers before it can enter the drinking supply — a  step taken not out of technical necessity but to tamp down public squeamishness (people are more at ease with water from the ground). But a raw water production facility in Big Spring, Texas, is sending its purified sewer water directly into the drinking supply. The process is more efficient this way, as there’s less opportunity for evaporation. Right now, the plant supplies 40 percent of the water for the city’s 27,000 residents, and it’s inspired similar projects throughout the state. One is currently in the design phase in El Paso, where the population is more than 600,000.

“It takes somebody -- some local entity -- brave enough to try it out,” Robert Mace, of the Texas Water Development Board, told marketplace.org. “Then everyone else is looking over their shoulder. And then once they see it works: Boom. Off everyone goes.”

But will Americans really embrace this practice enough for it to take hold? The experts say yes, for a couple of reasons. First, it’s already happening -- unintentionally. If you live downstream of a major city, your reservoirs have been breached by treated sewer water already, meaning toilet-to-tap is a reality whether we like it or not. What happens in Vegas doesn’t stay in Vegas (it makes its way to the Colorado River). What’s flushed in Dallas ends up in Houston’s supply. Even the water fountains at Disney World are less than magical.

But more than that, the public is growing more comfortable with the concept. In the ’90s, a potable water recycling system in Los Angeles was killed when grossed-out opponents disparagingly coined the phrase “toilet to tap.” Since then, we’ve warmed to the idea -- and not just because astronauts have made recycling wastewater look cool.

“We thought the initial mistrust could be a question of the language used, or the images — whether people on the brochures are smiling enough, for instance,” Sedlak told Salon. “But in our studies of this, we’ve learned it’s largely a matter of new technology, which is always viewed with some skepticism. Now, people have had time to understand the processes, and trust the people who manage them.”

These processes are rigorous. When purified for drinking, sewer water is sent through microfilters whose pores can be as small 1/300th the width of a human hair. This filters out any solids before reverse osmosis strains out microscopic viruses, bacteria and pesticides. Lastly, the water is zapped with sanitizing ultraviolet light. The resulting product is so clean, it surpasses the EPA’s drinking water standards.

In fact, it can be a little too clean. The process removes so many dissolved solids, the final product is pretty flavorless (although some describe it as sweet), which can be a negative for people who like the taste of more mineral-rich water. So the purified water is often remineralized. At Big Spring, this means mixing it with reservoir water before a final round of treatment takes place.

The technology is tried and tested. All that’s left to do now is to convince people to get on board, and as the water crisis worsens, that's easier to do. As Mace told Salon: “My observations have been that people prefer wet water to no water at all.”