Did Donald Trump insult Jay Z? 5 unhinged right-wing moments at the end of the campaign trail 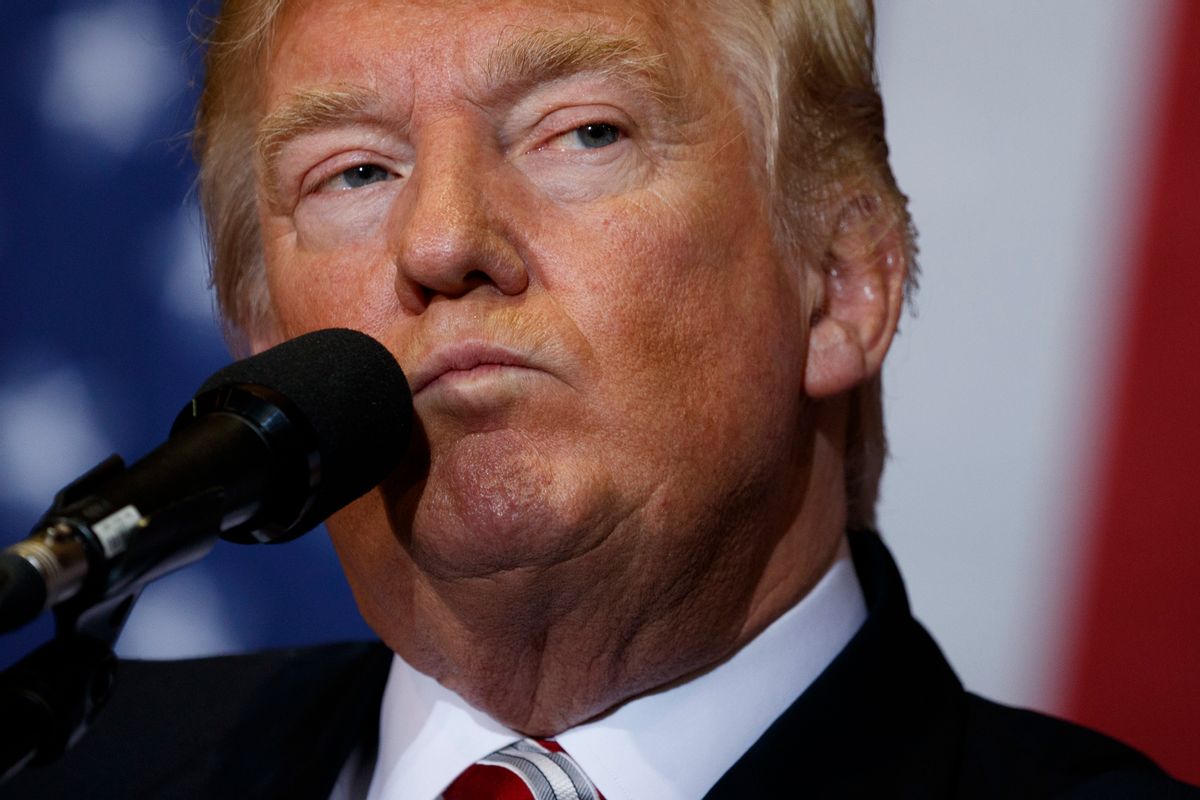 There is no telling what Donald Trump might say in the final days before Election Day. Two things we do know, it will be whiny, and it will bear no relation to reality. Trump doesn’t understand why all the cool celebrities like Jay Z and Beyonce don’t like him. And projection? No one projects better and more hugely than the Donald. No one.

While campaign manager Kellyanne Conway is likely begging him to stick to the teleprompter, there are already signs that Trump is going far far off script to a place that exists only in his orange little head.

Some of the nuttier moments in the final days are here.

On Friday, President Obama generously gave Donald Trump a perfect little object lesson in civility and graciousness. At an event for Hillary Clinton in North Carolina, a pro-Trump protester had infiltrated the crowd and was trying to disrupt the proceedings. When the crowd began to boo, President Obama chastised them. When they ignored him, he scolded them some more, urging them to focus on what’s important. "We live in a country that respects free speech,” Obama reminded the crowd. “Second of all, it looks like maybe he might have served in our military and we have to respect that. Third of all, he was elderly and we have to respect our elders. And fourth of all, don't boo, vote!"

This objective and documented reality is, perhaps not surprisingly, what Donald Trump observed. First, he wasn’t quite sure why President Obama was campaigning for his opponent. After all, no presidents, current or former, are helping him out. What gives? No fair!

Trump told his apparently insanely gullible crowd in Tampa, Florida: "He was talking to the protester, screaming at him, really screaming at him.” And now, commence whining. “By the way, if I spoke the way Obama spoke to that protester, they (the mean old media) would say, 'He became unhinged!'”

He was on a roll: “He spent so much time screaming at this protester and frankly, it was a disgrace,” Trump bellowed.

Yeah, that’s not unhinged at all coming from a man who has urged rally goers to get rough with protesters, called them thugs (when they are black), talked about the good ole days when security could actually beat them up, and just out and out said he would like to punch them in the face.

2. And now a message from a man you hoped to never hear from again

Not content to sit upon the dust heap of history, John Sununu, former Governor of New Hampshire, and former Bush Sr. chief of staff, hit the campaign trail in his now contested home state. Sununu did not waste his moment in the campaign sun. He immediately used it to elevate the presidential discourse.  "You think Bill was referring to Hillary when he said, 'I did not have sex with that woman?'" he said referring to Bill Clinton’s notorious denial of an improper dalliance with Monica Lewinsky.

Way to connect with women voters, though, amirite? Of course, insulting Hillary Clinton sexual attractiveness to aging, paunched out lecherous white men is a staple of the Trump campaign, so Sununu fit right in. After all, it wasn’t so very long ago when Trump helpfully offered his “not impressed” assessment of Hillary Clinton rear view after creepily stalking behind her in the Town Hall debate. And of course, obscenely sexist signs, mugs, t-shirts and other paraphernalia about Hillary are all staples of Trump rallies and will fill the world’s landfills for years to come.

Sununu’s son (nunu), Chris, is attempting to follow in his father’s oh-so-classy footsteps in a bid to be New Hampshire’s next governor. He had no comment on the important matter of Hillary Clinton’s imagined bangability.

3. Trump complained about quite possibly the stupidest thing about Jay Z

Licking his wounds over his lack of celebrity firepower in the final days, Donald Trump just could not believe that Jay Z and Queen Bey had joined up with team Hillary. The royal couple of hip hop and pop played a mini-concert for adoring fans in Cleveland at a get-out-the-vote event for Clinton in Cleveland that was said to be one for the ages.

For his part, Trump was shocked, shocked I tell you, at the language Jay Z used. The would-be “pussy-grabber” in chief, who enjoys boasting about such activities thought that Jay Z had a bit of a potty mouth.

“I actually like Jay Z,” Trump told supporters in Florida Saturday morning. "But, you know, the language last night. He used every word in the book.”

Finally, he got back to his well-worn practice of whining about how very unfair everything is. “I won’t even use the initials, because I’ll get in trouble. They’ll get me in trouble,” they being that mean nasty old press that is always picking on him by reporting things he has actually said and done.

It was almost as rich as Melania impassioned plea this week about fighting cyber bullying, which reminded many people of those horror movies where you want to tell the pretty girl that the monster is actually right there in the house with her.

4. Trump surrogate outdoes even his certifiably insane self

In their infinite wisdom, CNN has hired one of the most odiously bizarre Trump apologists on the planet. While a laundry list of possible candidates just flashed through your head, we are talking about Jeffrey Lord, the world’s weirdest and most racist pseudo historian. Lord has staked out the position that the KKK was created by progressive leftists, and that modern Democrats should be spending more time apologizing for slavery which they alone caused.  Poor Van Jones has expended considerable brain power trying to talk sense into this hateful nutjob without achieving one iota of progress for his trouble.

So naturally, Anderson Cooper invited Lord on to shed intelligent light on the enthusiasm the KKK has expressed towards Donald Trump this week In fact, Lord wasn’t even the only Trumpian on the panel. Georgia Republican Jack Kingston was happy to kick things off with a little typical disinformation about how Democrats are playing the “race card,” by just pointing out the whole KKK thing.

Note: Democrats only play the race card when they cannot play the woman card, fyi.

Enter Jeffrey Lord. " When is Bakari going to get around to apologizing for slavery? I'm still waiting on that."

Bakari and the rest of the sane world buried his face in his hands and said, “Oh, my God.”

Truth reversal complete: A white idiot has now asked a black man to apologize for slavery.

Clueless actress Stacey Dash has been admirably performing her duty as head of Trump's black outreach, a position she shares with Omarosa Manigualt. Together, they have found all two of Trump's African American voters.

In a brilliant piece of strategy, Dash decided to pick a fight with the mother of Beyonce, quite possibly one of the most adored performers in the universe, who performed on behalf of Hillary Clinton on Friday.

It seems that Dash was miffed when she caught sight of Beyonce and Solange's mom, Tina Knowles, posing with former Destiny’s Child member Kelly Rowland — who was dressed for Halloween as the character Dash played in Clueless, pretty much her sole claim to fame.

“This is my baby Dione last night of course she is prettier and more smarter than the one from the movie, but I was confused cause she kept saying something about her pager,” wrote Knowles.

Dash, who, quite honestly might have already been relieved of her post as head of black outreach for the Trump campaign and therefore might have some time on her hands decided this required a response on her blog. “Beyonce’s mom just threw some shade at me? Here’s my unedited response,” she wrote. “First of all, if you’re trying to throw shade about someone’s intelligence, maybe use ‘smarter’ instead of ‘more smart,'” she pettily pointed out.

Ah well, it's all pretty petty, but the internet swarmed in response. Nothing gets by the fanatical "bey-hive" which stung ferociously in response. Read some of the tweets here.