Kim Kardashian is the GOP's only hope: If American democracy is now a reality show, let's bring in a real star

If Republicans really want an "outsider" who's "self-made" and "not beholden to special interests," she's perfect 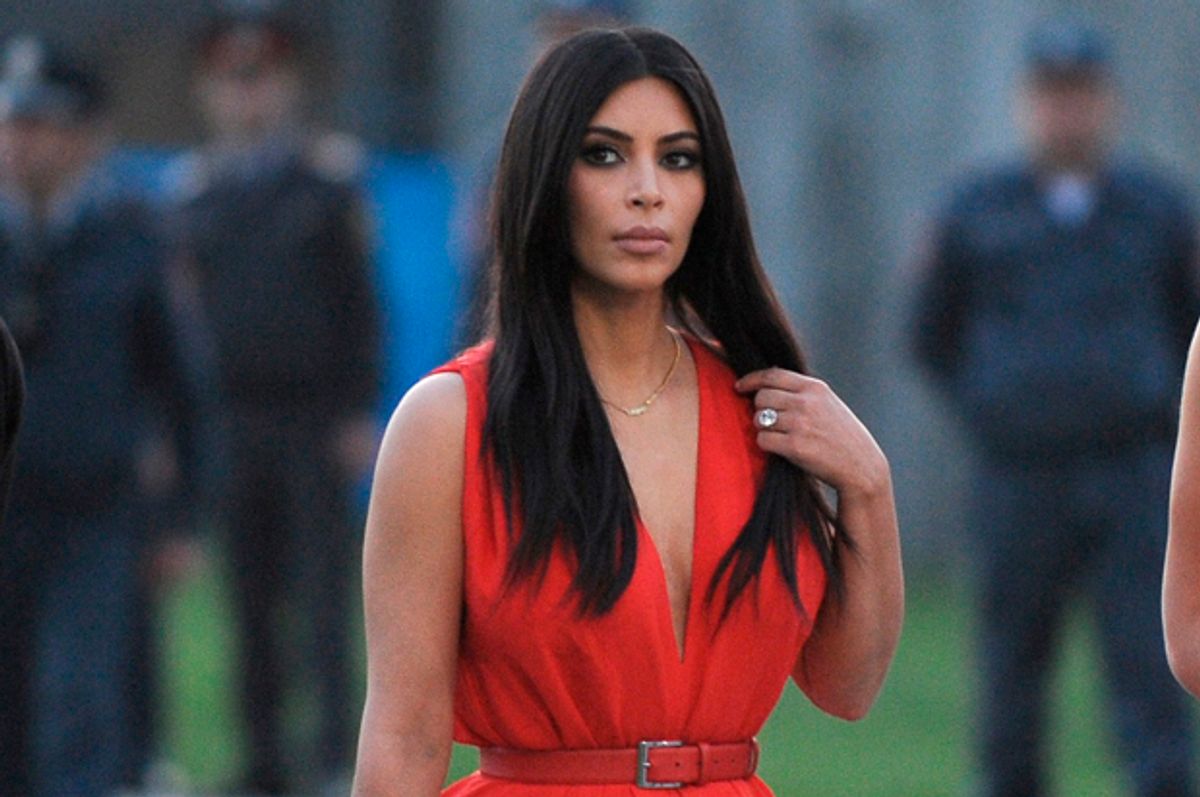 If the polls hold true, and Hillary Clinton becomes the nation’s next president, Republicans will inevitably debate how to proceed as a political party, considering that they will have lost three consecutive presidential races. Although I am not a Republican, I share the great right-wing value of compassion for the downtrodden. So, I would like to suggest who they nominate for president in 2020.

Donald Trump managed to shake the walls of the party structure by defeating 16 primary opponents, all of whom had more governmental experience and political expertise. Voters expressed excitement over electing a “businessman” and “Washington outsider” — someone whose accomplishments in the “real world” could bring desperately needed practicality and financial savvy to the bloated bureaucracy of increasingly inefficient public institutions.

It seems unwise to deplete all of the populist energy out of the party. The nomination of a vanilla senator or boring governor would fracture the Trump coalition, sending the new “base” of the party back to the caverns where they once lurked. It is clear that in order to maintain enthusiasm for its brand, Republicans must nominate another wealthy tycoon who can claim “self-made” credentials, and who can quickly establish distance between the antiquated methodology of Washington and the innovative improvisation of business.

The only problem that remains is the crucial question of outreach. In 2012, Republicans adopted the strategy of pretending that Latinos and blacks do not exist as an attempt to persuade Latinos and blacks to vote for them. In 2016, they decided to insinuate that Latinos are a collection of invading rapists and deadbeats, while African-Americans live in such “hell” that they would support someone whose pitch is actually “What do you have to lose?”

It is a quandary, but the Republicans must find a candidate who can simultaneously maintain the anti-government, anti-politics cachet of Trump, while broadening the conservative constituency to include higher percentages of young women, Hispanics and “the” blacks.

The solution to every Republican problem is obvious. She’s been here all along. Kim Kardashian. If Republican voters acquire political intelligence between now and the next presidential primary, they will support, assist and encourage the nomination of Ms. Kardashian. For reasons far beyond physical beauty, she will make a much better public face of a conflicted party than the monstrous mug of Donald Trump.

To prevent any confusion or unwelcome laughter, the suggestion of Kim Kardashian as a candidate for president of the United States is not a joke. It is not a gimmick. According to every justification for Trump’s ascendancy to political leadership, Kardashian is vastly superior not only to every elected Republican official; she far surpasses Donald Trump himself.

Kim Kardashian has become an international mogul in multiple fields: modeling, fashion and media. She has built an empire with far fewer of the advantages that the young Donald Trump enjoyed. She inherited far less, and did not enter the same field as her wealthy lawyer father, unlike Trump, who was able to capitalize on the connections of his father. Many financial experts have demonstrated that had Trump taken his inheritance and invested it into a typical S&P index portfolio, his wealth would equal, or even exceed, his current assets. The riches of Kardashian suffer under no such inconvenient complication. By any measure, she is a much more impressive and authentically entrepreneurial businessperson than Donald Trump.

Financial experts estimate that Kim Kardashian’s net worth is $150 million. She has never declared bankruptcy, unlike Trump, and she has never faced accusations, let alone lawsuits, for refusing to pay partners and honor her transactional commitments. In a profile of the model turned mogul, Forbes declared that Kardashian has “monetized fame better than any other.” She charges thousands of dollars for sponsored Twitter and Facebook posts, but more impressively, she has created immensely profitable lines of beauty products, fragrances and tanning supplies. Her clothing boutique, DASH, began as a single shop, but now outsources items for sale at Sears and other major department stores around the world. She also launched the subscription website ShoeDazzle. It currently has 3 million paying members, making it one of the most successful online fashion markets in the world.

Similar to Donald Trump, Kim Kardashian is also the creator and star of a successful reality television series. “Keeping Up with the Kardashians” is the highest rated program on the E! network, but even more significant than Trump’s "Apprentice" television show, the enormous ratings triumph of Kardashian spawned several spinoffs. It is almost as if the entire E! programming lineup is dedicated to monitoring the daily activities of the Kardashian family, whereas NBC is clearly able to survive without the presence of Donald Trump and his cyborg children.

In the early stages of the Republican primary, Trump struggled to explain his close relationship with numerous political figures of the Democratic Party, including Hillary Clinton, for whom he was an enthusiastic supporter through 2008. His voluntary admission of tactically placing political donations to earn favor corrupted his insurgent status. Kim Kardashian, who has called herself a “liberal Republican,” has no such blemishes on her résumé. She claims an ideology that is “fiscally conservative and socially progressive,” and has demonstrated interest and passion in Armenian genocide, even visiting the nation to personally attend memorial services for the victims. One cannot help but wonder if Donald Trump is aware that Armenia even exists.

Many early critics of the Kardashian for President movement might speculate that political ignorance should preclude her from making important political decisions should she emerge victorious at the end of the campaign. Donald Trump, who according to some polls is in a dead heat with a former secretary of state and senator, does not seem to understand how a bill becomes a law, is unaware of the obligations of American membership in the NATO alliance, and advocates for several policies, most especially those related to immigration, that are unconstitutional.

Kardashian is often the target of ridicule for her stereotypically “Valley Girl” manner of articulation. In the past, the inability to express oneself with erudition could disqualify a candidate for consideration to high office. Both Sarah Palin and Donald Trump have broken down that barrier for the GOP. Linguists have determined that Donald Trump speaks at middle school reading level.

Another objection to the Kardashian candidacy that might arise is the infamous sex tape that helped her acquire sufficient publicity to launch her career. It is easy to anticipate her having to answer for the tape during Republican debates, but an irrefutable defense that she can offer is the consensual nature of the sexual activity on the recording. Trump’s infamous sex tape in which he brags about committing sexual assault reveals character flaws of much greater concern, especially given that 12 women have alleged sexual harassment and misconduct on the part of Trump. At time of writing, no one has accused Kardashian of committing a sexual crime.

If lack of a track record in sexual assault is an advantage for Kardashian, in the general election her lack of racism will also serve her well. She will face significant obstacles in the Republican primary with voters who are increasingly racist and xenophobic in their emotional positions (to call them political would be too large of a compliment), but should she secure the nomination, her interracial marriage to a black icon, comfort with the African-American community, and advocacy of diversity will enhance the Republican capability of gaining greater support from black, Latino, and Asian constituencies.

Kim Kardashian is a better businessperson than Donald Trump; she operates further outside of the political system, but has much more sophisticated awareness of international issues, and she, perhaps alone, can begin to repair the years of damage resulting from the racial arson of the Republican Party. She also will not have to account for the multiple bankruptcies, pending lawsuits for financial fraud, and allegations of sexual harassment that currently darken the character of Donald Trump like a cloud of toxic gas. In addition to having superior entrepreneurial skills, Kim Kardashian is much more morally upstanding.

On the issue of morality, one conservative defect threatens to demolish the Kardashian campaign before it even begins. She supports female autonomy, believing that a woman has the right to obtain an abortion.

One of the last unifying principles of the Republican Party is the relegation of women to child incubation. Anyone who takes a moderate position, not to mention a liberal one, on women as humans who have the right to control their own bodies is quickly excommunicated. Trump, who spent decades proudly proclaiming his pro-choice position, has demonstrated that the right wing will accept pandering in place of political consistency. Trump’s bizarre conversion story involving “friends” who were going to have an abortion, but at the last moment decided against it and now have “the most beautiful child,” quickly morphed into his proclamation that “there has to be some kind of punishment” for women who terminate their pregnancies. Crucial to his establishment of anti-choice credentials was his allowance of evangelical conservatives to compile his short list for potential Supreme Court nominees, all of whom would vote to overturn Roe v. Wade, and his selection of the mega-churchy Mike Pence as his running mate. Pence has one of the most vicious anti-women records in the country, and sends a signal to the twice-born that the Trump administration will not tolerate “nasty” women doing anything nasty.

If opposition to abortion, and perhaps low taxes, is all that holds the Republican Party together, Kardashian can easily pull a Trump. She would do well to fabricate her redemption narrative now, so that she can dedicate an episode of “Keeping Up With the Kardashians” to its broadcast. E! might even advertise and air it as a special episode – Maybe “It’s FUN-damental: Kim K’s Conversion?”

Then, all she has to do is start asking questions out loud about Barack Obama’s place of birth, and promising to eliminate health care options for millions of people. Before she realizes it, her air time on Fox News will make E! seem like local access television, as she becomes the star of the greatest reality television programming of all — American democracy.

Those who dismiss the Kardashian presidency as absurd, but take seriously the prospect of Donald Trump’s inauguration, must explain why. Is it because Kim Kardashian is a woman? Is it because she is a “sex symbol?” The Republicans could use a candidate who could excite young women voters, and it seems prejudicial and irrational to disqualify a candidate because of beauty, especially considering that the current Republican nominee for president has a habit of rating women on an appearance scale of 1 to 10.

People often criticize Kim Kardashian unfairly, using her name as a shorthand for stupidity and shallowness, but she has never demeaned people of color, she does not insult immigrants, she does not mock the disabled, she does not grope people without their consent, and she has never declared bankruptcy or defrauded her business associates out of the money that she promised them.

Historian Morris Berman has joked that the American government should put a picture of Kim Kardashian on the 20-dollar bill. Well, it is not a joke any more, and the best way to ensure that it actually happens is to elect Kim Kardashian president of the United States.