"The Walking Dead" and "Game of Thrones": When is it time to abandon the source? 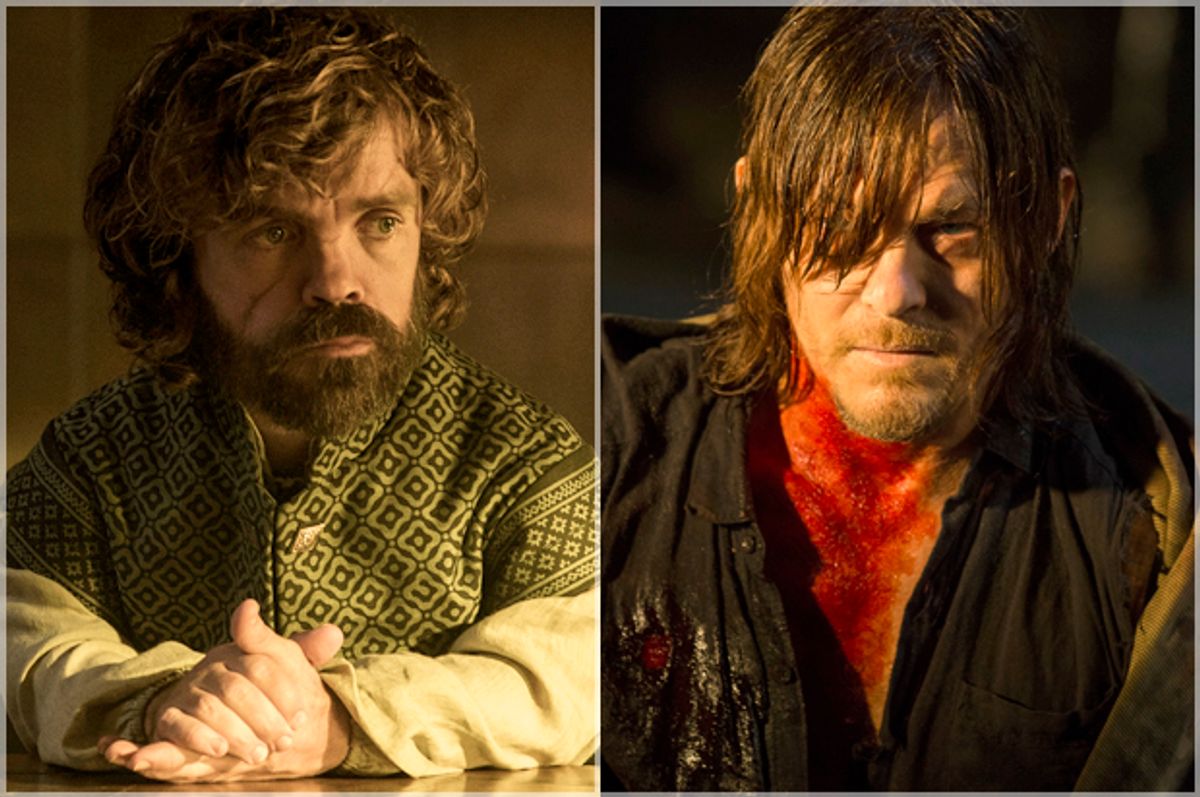 Peter Dinklage in "Game of Thrones," Norman Reedus in "The Walking Dead" (HBO/AMC)
--

Watch enough of “The Walking Dead” – hell, just read the title – and one comes to accept that seeing character either bite it or get bitten is part of the contract. That idea makes the fan anticipation for each season’s premiere feel akin to some perverse holiday tradition.

Past finales closed with Rick Grimes (Andrew Lincoln) and his group facing imminent death or some ominous unknown, leaving viewers to sweat out the summer until the new season began.

Then came Negan, perhaps the most iconic villain of the comics. The writers hinted at the character’s powerful malignance throughout the second half of season six. Various hostage situations and outright murders were presented as if they were flirtations. Once Negan finally arrived in the sixth season finale (in the form of hunky actor Jeffrey Dean Morgan) the threat was clear: one of the main crew was going to die.

The seventh season’s reaping immediately felt different, though. It wasn’t merely a matter of who died, a fact AMC miraculously kept secret for six months. It is the manner in which the producers handled those deaths.

Negan’s modus operandi is to beat his victims to death with his barbed-wire bat Lucille, which he did – to Abraham (Michael Cudlitz), a relative latecomer to the band. Many suspected Abraham's number was up, so though the act was terrible, we breathed a sigh. Then, surprisingly, Negan turned on the gang’s beloved moral center, Glenn (Steven Yeun), a core character on the show since “The Walking Dead’s” second episode. In the comic books upon which “The Walking Dead” is based, this is how Glenn actually dies. It’s horrible enough as it's rendered in black and white.

The television version, meanwhile, was written to maximize the scarlet gore of the twist, squeezing every ounce of squishy pulp out of Glenn’s death. Tight shots lingered on Glenn’s bloody face with his eyeball hanging from its socket before Negan liquefied his skull, strutting around as a hairy piece of Glenn’s scalp flapped from the bat. It was a lot to absorb. Too much, truly.

But that’s what happened in the comics. It had to be done. Right?

Maybe not that way. Not on television.

Navigating source material is a tricky business for television producers, made even more fearsome by the ownership fans tend to claim over a particular property. Cinemaphiles have long had to contend with those friends who immediately point out the ways in which Novel X is so much better than Movie Y. And sometimes — all right, a lot of times — they’re right.

A television series based on literary material presents an additional set of challenges to its writers, starting with the quest to create a narrative that has a cogent guiding purpose and is sustainable over anywhere from six hours to dozens. “The Walking Dead” presents its 86th episode this weekend; the comics are already up to 162 issues.

Once that narrative is established, the producers also have to build three-dimensional characters that the audience will accept as whole and true, who we invite into our lives. A careful, talented novelist has already done most of that work for the television writers' room, which is a key reason that established properties are such welcome commodities right now.

Another, of course, is the presumption that such a show arrives with an established audience built in. That wager worked brilliantly for Starz, which raised its profile tremendously by painstakingly crafting a television version of Diana Gabaldon's “Outlander” novels. And the premium cable channel hopes to catch lightning in a bottle once again with a series based on Neil Gaiman’s “American Gods,” executive produced by Bryan Fuller of “Hannibal” fame.

There's also the task of presenting an adaptation that remains true to a title while not turning off its most loyal fans. In a lot of ways, that's the most difficult part of bringing books to the small screen, and the reason that AMC's "Preacher" wallowed in development hell for eons — the sheer scope of it seemed impossible to tame. The novel that  inspired BBC America's "Dirk Gently's Holistic Detective Agency" is similarly unwieldy. But the writers of both series made them work by honoring the tone of those books, if not following their wandering plots to the letter.

None of this is revelatory information, we know. What is, however, is the way the seventh season premiere of “The Walking Dead” broke a barrier of sorts by revealing the perils of showing perhaps too much reverence for its source material.

On the pages of “The Walking Dead,” death is a far more casual and frequent companion than it is in the television series. Over the last 13 years Robert Kirkman and artist Tony Moore have developed tens of characters and killed them off on a variety of creatively nightmarish ways. If you think Glenn’s offing was gruesome, you’d be well-advised to stay the hell away from these books.

Over the course of the first few seasons of “The Walking Dead,” even as showrunners came and went, “The Walking Dead” writers appeared to understand that there were some aspects of the stories that just should not be shown on television. And anyone familiar with the series may reel at the notion that the show has been relatively restrained and calculated in terms of shaping its characters as well as killing them off.

The Carol presented in the graphic novel, for example, is vastly different from the Carol in the series by design; on the pages she’s a weak, delicate abuse victim who commits suicide, the polar opposite of Melissa McBride’s pragmatic warrior who transforms her sorrow and fear into steely purpose. Michonne (Danai Gurira) provides another example. Distant and somewhat cool in the comics, the TV drama’s writers made her a vital, dangerous and devoted heroine.

And, if the series producers had adhered to the comic’s plot, she would have also been sexually assaulted during the season featuring The Governor. Television history, and the uproar over the way shows such as “Game of Thrones” have utilized rape as titillation, tell us that’s a recipe for audience rebellion.

To be clear, this is not a matter of having a problem with the violence on “The Walking Dead” or “Game of Thrones” and any other show based on a published work or series of works. Producers are finding artful, boundary-breaking new ways to present scenes of repugnant violence all the time. “Game of Thrones” had a scene in which hounds tore apart a baby, for crying out loud. (By contrast, Rick’s infant Judith is still alive on the show, faring better than she did in the comics.)

The question is in how those deaths serve the TV story’s purpose.

Looking at “Game of Thrones” a bit more closely, executive producers D.B. Weiss and David Benioff spent around three of the series’ six seasons hewing closely to the intricate web of a plot George R. R. Martin mapped out in his novels, which is completely understandable. They’re gigantic tomes bursting at the seams, including family trees and maps. And the epic began with breaking a huge convention in storytelling, by killing the hero -- played in the series by Sean Bean, the only star in a cast of little-known actors in that first season.

But “Game of Thrones” soon outran the novels, granting the producers license to expand the presence of some characters and opting to keep others out of the drama’s storylines completely. (Some of us still pine for Strong Belwas but… oh well.) The writers also made notable mistakes along the way in the service of violence. Theon Greyjoy (Alfie Allen) endured an Iron Man marathon of torture at the hands of Ramsay Bolton (Iwan Rheon), drawn out over an entire season of the series, whereas Martin's writings mostly alluded to them in flashes of that character’s dark memories. And the TV series’ expansion of that grim chapter in the character’s life did nothing to raise Theon in our estimation. Ramsay, meanwhile, only became more tiresome.

And yet, few if any would argue that the writers should have found a way to avoid The Red Wedding, a transformative work of butchery that altered the landscape entirely. The violence of that scene was amplified, as well, by showing the murder of a character who had a heavier presence in the series and is all but invisible in the books. But in that case, it heightened the tragedy of that malicious twist.

Again, it’s a matter of what works on the page versus what viewers will withstand on their shows. Does the violent action on the screen open a door for a show’s writers to reveal some new internal frontier in the character who suffers the act? Or, as is more often the case, is it used as a lazy tool to activate heroism in others -- usually men -- while failing to explore the after-effects on the victims, who tend to be women?

Is the blood being spilled the heartbreaking ramification of an unwise action, or are the producers giddily smearing our faces in gore for the sake of their own entertainment, using the source material as an excuse to celebrate senseless murder?

That’s something worth thinking about as this season of “The Walking Dead” progresses. Until now, the writers have largely succeeded by holding the comic’s plot threads loosely, delineating the difference in tone between page and screen. That has kept a number of us guessing, even if others have lost interest along the way.

Their abandonment is understandable. Though “The Walking Dead” is a survival story, it’s also about the family we choose and protect as the world crumbles around us. When it was a good, if grim, diversion, it gleaned emotional value out of Rick’s struggles to maintain his humanity in a land filled with soulless dead flesh that cannot be reasoned with.

Yes, it’s a ruthless world, where a figure such as Negan — an animal unlike any that Rick and the group have faced before -- presents a new challenge. He’s a misogynist whose power is rooted in his perception of his own manliness, subjugating and emasculating all opponents with a spiky surrogate priapus. None can negotiate with him; they can only dominate him, or be destroyed. The comic book's faithful readers will merrily feast on the sort of malevolence Negan and antagonists like him trade in for as long as Kirkman wants to keep serving it.

On the other hand, the television audience may have grown weary with seven seasons of rot and despair. Better chapters have killed off innocence (Sophia), wisdom (Hershel) and optimism (Beth, a character made for TV). Now Glenn, the voice of reason, has been pounded into the dirt. Where else can this series go? More importantly, is it worthwhile to keep following its journey until it arrives there?

For a number of viewers, the answer to that second question may be no: the show suffered a whopping 27 percent ratings decline between the season premiere and last week’s second episode. Granted, it was still far and away last week’s top-rated cable show, and will likely perform as robustly this week. But that's a significant plunge in comparison to previous seasons.

Perhaps viewers can be heartened by the success of season six of “Game of Thrones.” It was the only one that was completely off-book, and what do you know -- it actually became a better TV show, even with its imperfections.

There’s still time for “The Walking Dead” to course correct. Let’s hope they do. The producers have teased, in multiple outlets, that “they’re just getting started.” But if the show's content and ratings keep heading in the direction that the premiere indicated, how many of us will be there when it shambles across the finish line?