Comey the Clown: James Comey's latest letter to Congress proves he and the FBI are a farce — only no one is laughing 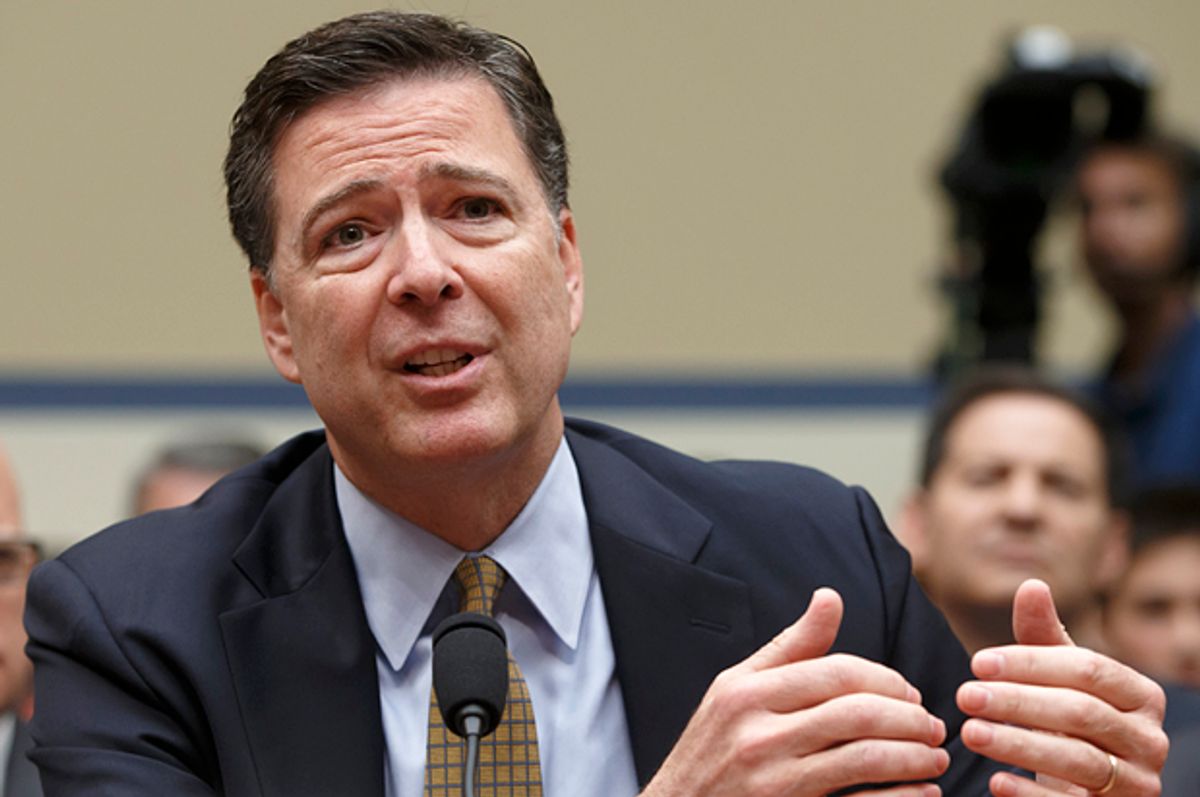 Thanks a lot, F.B.I. Director Emily Litella. Nine days after James Comey upended the presidential race by notifying Congress about the discovery of a cache of emails that might or might not have come from Hillary Clinton’s private email server, he returned on Sunday to echo Gilda Radner's classic SNL character with a resounding “Never mind!”

Comey followed up his bombshell of Oct. 28 with another plainly worded, non-explanatory letter to the same Republican congressional committee he heads. This latest letter stated that a review of the new emails, which were found on a laptop belonging to former congressman Anthony Weiner, had “not changed our conclusions” from last July that criminal charges against Clinton for mishandling classified materials were unwarranted.

In between the release of the two letters, the public was treated to enough leaks, whispers and peeks behind the curtain to grant the writers of “Quantico” several seasons’ worth of material.

There were reports of turf wars over the investigation into Clinton’s emails between the New York and Washington field offices of the F.B.I. There were rumors Comey had to reveal the existence of the emails found on Weiner’s laptop before some anti-Clinton agents leaked them. There were eye-popping numbers tossed around — 650,000 new emails! There were news stories painting a picture of federal agents pursuing cases based on the work of the conspiracy theorists and scandalmongers who run Breitbart, which not so coincidentally has basically been a media arm of Trump’s run for president.

Which essentially made it look as if the federal government’s main criminal investigative agency had been co-opted by a presidential candidate whose supporters were now using it to pursue a baseless investigation of a political opponent.

Above all, there were condemnations of Comey for injecting himself and the nation’s law enforcement apparatus into a presidential election a week and a half before the polls opened, at a time when early voting was also just starting up in many states. In doing so, the director had ignored the advice of the attorney general and violated Justice Department guidelines for publicizing criminal investigations so close to Election Day, lest the public perceive the nation’s criminal justice system as having its thumb on the scale for one candidate over the other.

One might think that given all the public grief he received, including a public scolding from President Obama, Comey might have been a little more forthcoming with Sunday afternoon’s letter. Instead he kept everything vague, once again letting anonymous sources leak the details of what the investigation of the new emails had found.

The major finding? Pretty much what anyone with an awareness of how email works could have told the F.B.I. a week ago: that the emails, which found their way to the laptop through Weiner’s ex-wife and high-level Clinton aide Huma Abedin, were duplicates of emails already discovered through the Bureau’s exhaustive investigation that had culminated in July’s announcement.

Of course this did not stop Trump surrogates from leaping into action to question how the investigation had been conducted so quickly, and from casting aspersions on the investigators they had been quick to praise a few days ago. Which makes one wish Comey had been more transparent with Congress on Sunday.

But that also raises the question — yet again — of why Comey wasn’t more transparent a week and a half ago, or why he botched the entire situation so badly from both an investigative and public-relations standpoint while giving Americans an excuse to remember all the times in history when the F.B.I. has persecuted people its director viewed as political enemies.

Really, though, whether Comey was being nakedly partisan or simply covering his own ass with Congress with the initial notification was beside the point once his first letter became public. What is clear is that the polls between Clinton and Trump tightened noticeably over the last week, just when the Democratic candidate seemed to be cruising to a large victory that could possibly also drag the Senate along on her coattails.

Perhaps the data nerds will discover, when they finish sorting through the wreckage of this election, that the poll tightening was unrelated to this witch hunt. But for the moment, it is hard to ignore the conclusion that the authoritarian Trump might have inched a bit closer to the Oval Office because some right-wing F.B.I. agents are big fans of Peter Schweizer and Ed Klein.

For about three minutes on Sunday, it was possible for Clinton supporters to cycle from a state of hopped-up outrage, to relief, and right back into the sort of high dudgeon that sets forehead veins throbbing. Which has been a familiar feeling for partisans across the political spectrum for the last year and a half. This latest blowup over Clinton-related emails — sucking in as it did one of the nation’s top law enforcement officers and the partisan witch hunters of Congress who have already vowed to spend the Clinton presidency chasing any molehill they can turn into a scandal-wracked mountain — increases the dizzying sense that there is no one at the helm of the ship of state.