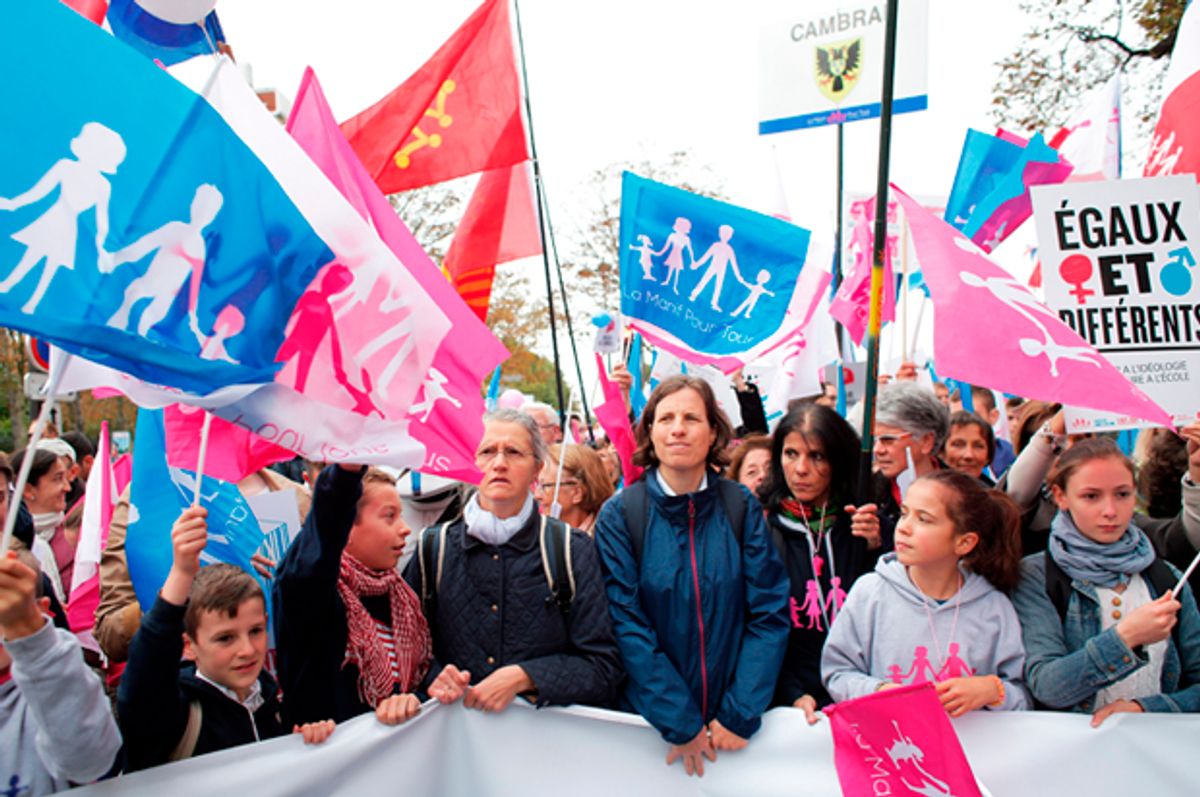 The war over hate speech in France continues following a surprising ruling against LGBT activists in the European country.

Last week a French court ruled that calling someone a “homophobe” is akin to a hateful slur. Judges fined Laure Pora, the former head of the Paris chapter of ACT UP, 2,300 euros for using the term during a 2013 demonstration against the pro-life group Lejeune Foundation and La Manif Pour Tous (which translates into “The Protest for Everyone”). The latter is an anti-marriage equality outfit that has frequently protested same-sex unions in the state since right-to-wed legislation passed in 2013. Gay activists posted xeroxed fliers featuring Ludovine de La Rochère, the group’s president, with the word “homophobe” over her face.

This is an unfortunate blow to equal rights in a country that remains rocked by protests three years later. Calling out anti-gay bigotry is one of the most important tools that activists have at their disposal, the ability to raise awareness about the persistence of prejudice simply by naming it. Taking away that tool means taking away the voice of the marginalized during a time when LGBT people are already extremely vulnerable to the forces of hate.

Hate speech has become a frequent topic of discussion in France following a pair of terrorist attacks in 2015. In January, two men stormed the offices of Charlie Hebdo, a French weekly magazine known for its button-pushing satirical cartoons. Taking offense at a depiction of the Prophet Muhammad, the gunmen slaughtered 12 of the publication’s employees. Just 10 months later, 130 people were killed and another 368 injured during a coordinated attack on Paris’ Bataclan concert hall and other locations in the French capital.

As the nation grapples with violence, an old question has arisen: How do we talk about it?

Marine Le Pen, a leader for the anti-immigrant National Front, has used the tragedy to stoke the flames of Islamophobia in France. For the uninitiated, she is the daughter Jean-Marie Le Pen, who founded the extreme nationalist group in 1972 but was ousted in 2011. Since taking over, his daughter has targeted the country’s large Muslim population, which is estimated at 4.7 million people. Le Pen was prosecuted for a charge of incitement in 2010 after she compared the presence of the Islamic faith in France to the Nazi “occupation” of the country during World War II at a rally in Lyon.

Le Pen’s comparison between Muslims and the Third Reich is notable if only for the fact that the country’s hate speech laws originate from the Holocaust. Europeans understand intimately how the ability to defame minority groups can lead to other kinds of hate campaigns, such as those used to stir up anti-Semitic sentiment during Hitler-era Germany. Following World War II, laws were introduced to prevent this trickle down of bigotry from speech to action.

In 1972 France passed legislation allowing the government to disband groups that espouse racist ideology. Eighteen years later, the country passed the Gayssot Act — which, on top of making Holocaust denial a crime, prohibits "any discrimination founded on membership or non-membership of an ethnic group, a nation, a race or a religion.”

Finally, the government added to its definition of discrimination in 2004 when it passed laws outlawing anti-gay and sexist attacks, a decision that was criticized by free speech groups. Currently, under French law, you can be fined 45,000 euros or spend a year in jail if found guilty of violating the statute.

“According to official statistics, in 2011 there were 359 convictions that involved hate speech, with the vast majority (293) involving public insult toward an individual, such as calling someone a ‘dirty Jew,’” he wrote in The Washington Post. “Most penalties involved fines or suspended sentences, with 11 cases resulting in jail terms. My research-in-progress shows that among all decisions rendered by France’s highest court between 1972 and 2012, 58 percent have tilted toward speech restrictions while 42 percent upheld free speech. Outcomes have thus been more balanced than one-sided.”

Even Le Pen was acquitted. After a long six-year process, a French court ruled that the nationalist politician didn’t “explicitly” incite the hatred of Muslims.

If the law isn’t the force of repression detractors believe, it has been the opposite for marginalized groups in France: a safeguard against the very real violence that they experience on a regular basis. The 2004 legislation extending hate speech protections followed a surge in anti-LGBT violence: During the prior year, the number of bias attacks against queer people doubled. Although 86 were reported, the country does little to track its hate crime numbers, so the actual figure is likely higher.

The passage of marriage equality did little to halt that trend. In 2013, SOS Homophobie, a French LGBT organization that aids victims of violence, reported that there was an anti-gay hate crime every other day.

This year has been a particularly brutal one for queer people in the nation following widespread demonstrations in the country. In October an estimated 200,000 people gathered in the streets to protest against recent gains made by LGBT rights workers, holding signs that advertised their intent to repeal those achievements. Marchers held signs reading “In 2017, I’ll vote for the family” and “All together for the family.”

Those ideas are gaining a surprising bit of mainstream currency in a nation known for being socially progressive. Nicolas Sarkozy, who served as the president of France from 2007 to 2012, has been running for re-election following four years of socialist rule, promising a return to a conservative agenda. In 2014, Sarkozy called for the repeal of France’s same-sex marriage legislation, and during the current election cycle, he has fought against adoption rights for same-sex couples, as well as promised to uphold the country’s ban on surrogacy.

Even President François Hollande’s government has backed off plans to legalize in vitro fertilization rights for gay couples, effectively making it illegal for gay men to have children.

Given the level of opposition that LGBT groups currently face in the country, last week’s ruling sets a profoundly dangerous precedent for queer Francophones. As is the case with any civil rights movement, the ability to use language effectively to communicate a core message is crucial. Harvey Milk, the San Francisco politician who was one of the first gay men to hold public office, urged LGBT people to come out at a time when many remained in the closet; they feared persecution, being tossed from their jobs, homes and families. In public speeches, Milk stressed hope at a time when many felt that simply being who they were was a hopeless state.

Preserving those rights remains a cornerstone of the movement, not only to remind others of our humanity but also to effectively call out the enemies of equality. In the U.S. this year, more than 200 bills were introduced that sought to roll back the rights of queer people, including the passage of North Carolina bill that makes it illegal for trans people to use the bathroom that corresponds with their gender identity. Although surveys show that America is more tolerant and accepting than ever, the LGBT community clearly still has a lot of enemies.

Can you imagine if the very act of pointing out that hate and calling it for what it is were illegal, simply because political extremists were worried about being branded homophobes? Doing so would only encourage silence in the face of bigotry, effectively doing the work of far-right conservative groups for them. It achieves the exact opposite goal of why France’s hate crime laws were passed to begin with.

Should LGBT people in France be looking for hope in the face of the recent hate crime ruling, they should look to Dan Savage’s campaign against Rick Santorum. In 2003, the popular sex columnist held a contest to redefine the name of the former Pennsylvania governor, known for his virulently anti-gay rhetoric. Santorum has compared same-sex marriage to bestiality, pedophilia, incest and adultery. In protest, Savage changed the word “Santorum” to mean "the frothy mixture of lube and fecal matter that is sometimes the byproduct of anal sex,” trolling the politician’s search results to ensure that this would be one of the first entries on Google. It still is.

If French gay activists can’t call Ludovine de La Rochère a homophobe, at least there are a number of other words they can call her.