Is this really Glenn Beck?: "Much of what I used to believe was either always a sham or has been made into a sham" 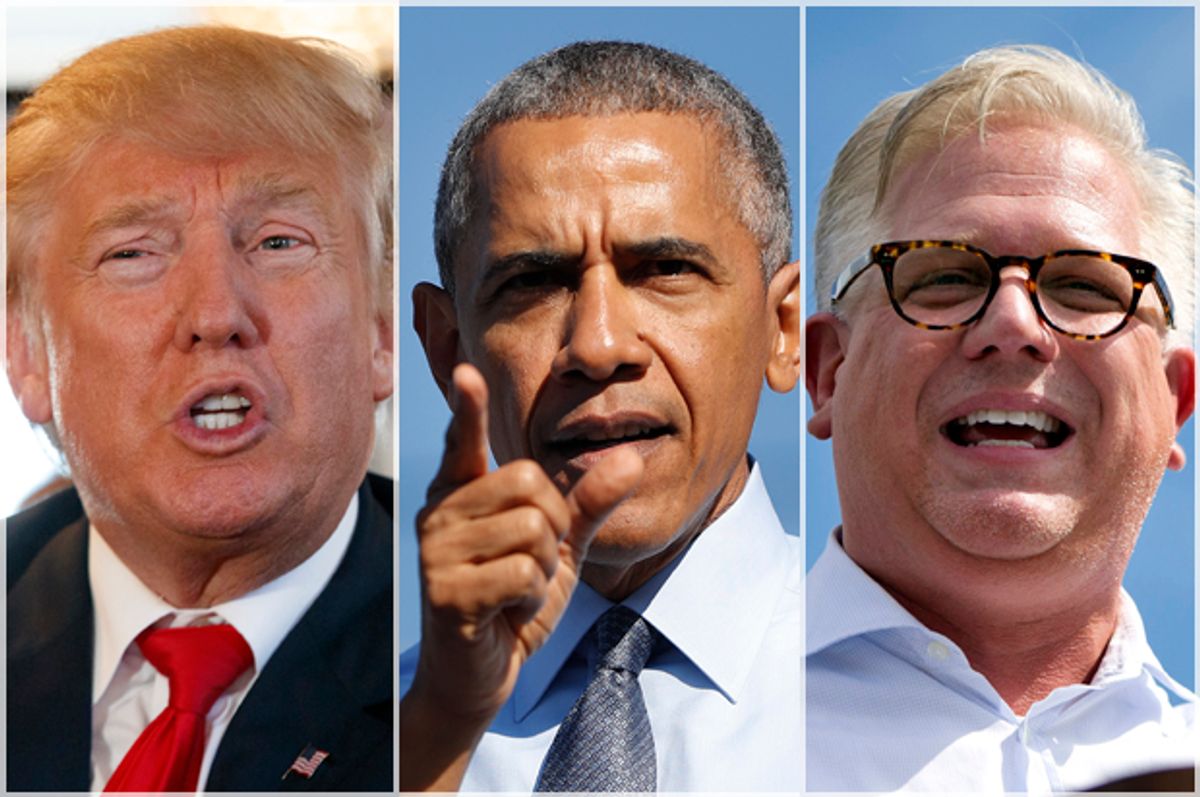 “Is there an evolution in Glenn Beck?” Charlie Rose recently asked the conservative commentator he had attempted to book on his PBS talk show for five years. Last month, the conservative firebrand, who has found himself increasingly at odds with his base as Donald Trump taken hold of conservatism, finally relented.

On that same day, Oct. 24, Beck sat for an interview with the New York Times editorial board, as well as with a staff writer from The New Yorker.

On Monday, Beck’s New Yorker profile was published, and it includes the latest and most dramatic apology the former Fox News host has ever offered for being one of the most caustic voices in right-wing media during the Obama era.

“Glenn Beck tries out decency,” staff writer Nicholas Schmidle’s profile is titled. In it the former Fox News pundit who once claimed that President Barack Obama has a “deep-seated hatred for white people,” insists that “Obama made me a better man.”

"I did a lot of freaking out about Barack Obama," the conservative pundit admits. But after meeting a “dangerously unhinged” Donald Trump at his at Mar-a-Lago resort, Beck is now praising a first lady who he called “a monster" only three years ago.

“She is Lady Macbeth,” Beck once said of Michelle Obama. “She is a frightening woman.”

Now the onetime conservative media pioneer is singing a very different tune about the first lady. Beck praised Michelle Obama's campaign speech warning of the dangers of Trump, and called her speech in New Hampshire blasting Trump for boasting about apparent sexual assaults “the most effective political speech I have heard since Ronald Reagan.”

“That was a moment that transcended all political thought," added the man who once opined, “When I see a 9/11 victim family on television, or whatever, I’m just like, ‘Oh shut up,’ I’m so sick of them because they’re always complaining."

Beck, who supported Ted Cruz during the Republican primaries and has been a vocal #NeverTrump voice amid a right-media landscape that has fallen hard for Trump, recalled a recent occasion when the GOP presidential nominee attempted to woo him.

“We had this weird, almost Howard Hughes-like conversation,” Beck told the New Yorker, explaining that Trump had summoned him to a guest room at Mar-a-Lago only to call him from an adjacent room.

As Schmidle noted, Beck “was flanked by two bodyguards” when he arrived for his October interview. It seems Beck’s that recent encounters with the alt-right -- a phenomenon he helped nurture with his lunatic ravings on a chalkboard and hawking of doomsday-prep survival kits -- are the real reason for his sudden conversion to civility. Beck’s recent condemnation of Trump and praise for Clinton has evidently turned his former supporters towards Alex Jones and against him. He claims he’s received death threats from Trump supporters.

“These people scare the hell out of me,” said Beck.

Beck’s turn away from the radical right wing that he helped mainstream into the wider conservative media may boil down to a business decision.

Noting that Beck has made a mainstream media apology tour of late, The Daily Beast outlined how the GOP’s civil war has created winners and losers in the conservative media landscape -- especially when it comes to #NeverTrumpers like Beck:

[Beck’s] privately-owned Mercury Radio Arts and its subsidiary The Blaze, which at their height generated an estimated $90 million annually — have experienced a reversal of fortune in recent years, with the loss of cable television carriage and advertising revenue, multiple layoffs of employees in the company’s suburban Dallas headquarters and a shutdown of operations in New York.

“We’ve made everything into a game show,” Beck told the New Yorker, shouldering the blame for the divisive rhetoric that gave rise to a candidate like Trump, “and now we’re reaping the consequences of it.”

He went on to say that “so much of what I used to believe was either always a sham or has been made into a sham. There’s nothing deep.”

Beck is trying to wipe the slate clean ahead of a likely Trump defeat Tuesday. He has offered as close to a come-to-Jesus moment as we've heard from anyone responsible for the sustained misinformation campaign that has left the GOP unable to nominate a competent candidate. Now Beck is seemingly bending over backwards to praise his former enemies and getting real about the state of conservative media. But is he to be believed?

Don’t forget, Beck tried this his hand at reinvention several times before.

“I think he’s up to his sixth apology cycle now, where he’s onto the mainstream media when they’re supporting him, and then he realizes he’s going to get burned, and he runs away from them. He’s basically flailing,” an unnamed business associate told the Daily Beast. As Lloyd Grove noted, during a January 2014 appearance on Fox News' "The Kelly File," Beck expressed regret for his role as a right-wing flamethrower during the presidency of the nation's first African-American president.

“I wish I could go back and be more uniting in my language, because I think I played a role, unfortunately, in helping tear the country apart,” he confessed.

As terrible as Beck’s behavior has been in the Obama era, we should welcome any semblance of sanity he can muster. After all, we may now face a future with Sean Hannity guiding the flock at Trump.TV.