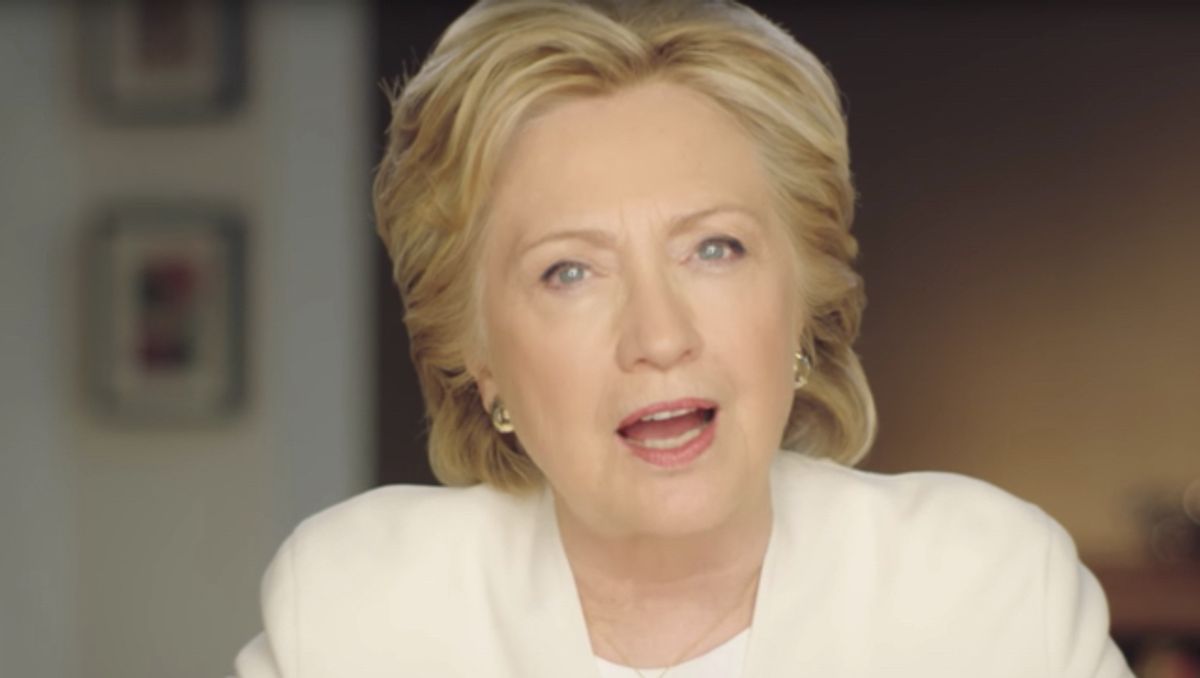 In the direct-to-camera commercial, Clinton vows to “work my heart out” and be a president “for all Americans."

Wearing white and backlit by soft white lighting, Clinton looks directly into the camera the entire time to deliver her final pitch without ever mentioning her opponent by name:

Our core values are being tested in this election, but everywhere I go people are refusing to be defined by fear and division. . . . Look, we all know we’ve come through some hard economic times and we’ve seen some pretty big changes, but I believe in our people.

She pledges in a calm tone, "I will work my heart out as president to make life better for you and your family," adding, "We won't always get it right, but you can count on this: I've never quit, and I never will."

The candidate acknowledges, "I think we can all agree. It's been a long campaign." She adds, “But tomorrow, you get to pick our next president.”

The former secretary of state, senator and first lady who is vying to become the first female president of the United States says, “Tonight I’m asking for your vote, and tomorrow let’s make history together."

Clinton's campaign estimates that the ad, set to air during NBC's "The Voice" and CBS' “Kevin Can Wait” — the prime-time network shows with the greatest audience — will reach an audience of about 20 million people nationally.

The ad is a marked tonal shift from a Clinton ad released on Friday that depicted the terrifying hellscape that a President Donald Trump would usher in during his first year in office:

"Everything I’ve done, as first lady, senator, or secretary of State, I’ve done by listening to people and looking for common ground, even with people who disagree with me," Clinton wrote. "And if you elect me on Tuesday, that’s the kind of president I’ll be."

Here are the four priorities she outlined in print for her first 100 days:

First, we will put forward the biggest investment in new jobs since World War II. We’ll invest in infrastructure and manufacturing to grow our economy for years to come. We’ll produce enough renewable energy to power every home in America within a decade. We’ll cut red tape for small businesses and make it easier for entrepreneurs to get the credit they need to grow and hire — because in America, if you can dream it, you should be able to build it. We’ll pay for it all by asking the wealthy, Wall Street and big corporations to finally pay their fair share. And this commitment will go far beyond the first 100 days. Creating more good jobs with rising incomes will be a central mission of my presidency.

Second, we will introduce comprehensive immigration reform legislation. The last president to sign comprehensive immigration reform was Ronald Reagan, and it was a priority for George W. Bush. I’m confident that we can work across the aisle to pass comprehensive reform that keeps families together and creates a path to citizenship, secures our border, and focuses our enforcement resources on violent criminals. This is the right thing to do, and it will also grow our economy.

Third, to break the gridlock in Washington, we need to get secret, unaccountable money out of our politics. It’s drowning out the voices of the American people. So within my first 30 days, I will introduce a constitutional amendment to overturn Citizens United. We should be protecting citizens’ rights to vote, not corporations’ rights to buy elections.

Fourth, we need to get started on end-to-end criminal justice reform. Too many people have been sent away for far too long for non-violent offenses. I believe our country will be stronger and safer when everyone has respect for the law and everyone is respected by the law.