"I hate Donald Trump": 12-year-old with cerebral palsy meets with President Barack Obama after being kicked out of a Trump rally

The day after J.J. Holmes was taunted and booted from a Trump rally, he meets the president 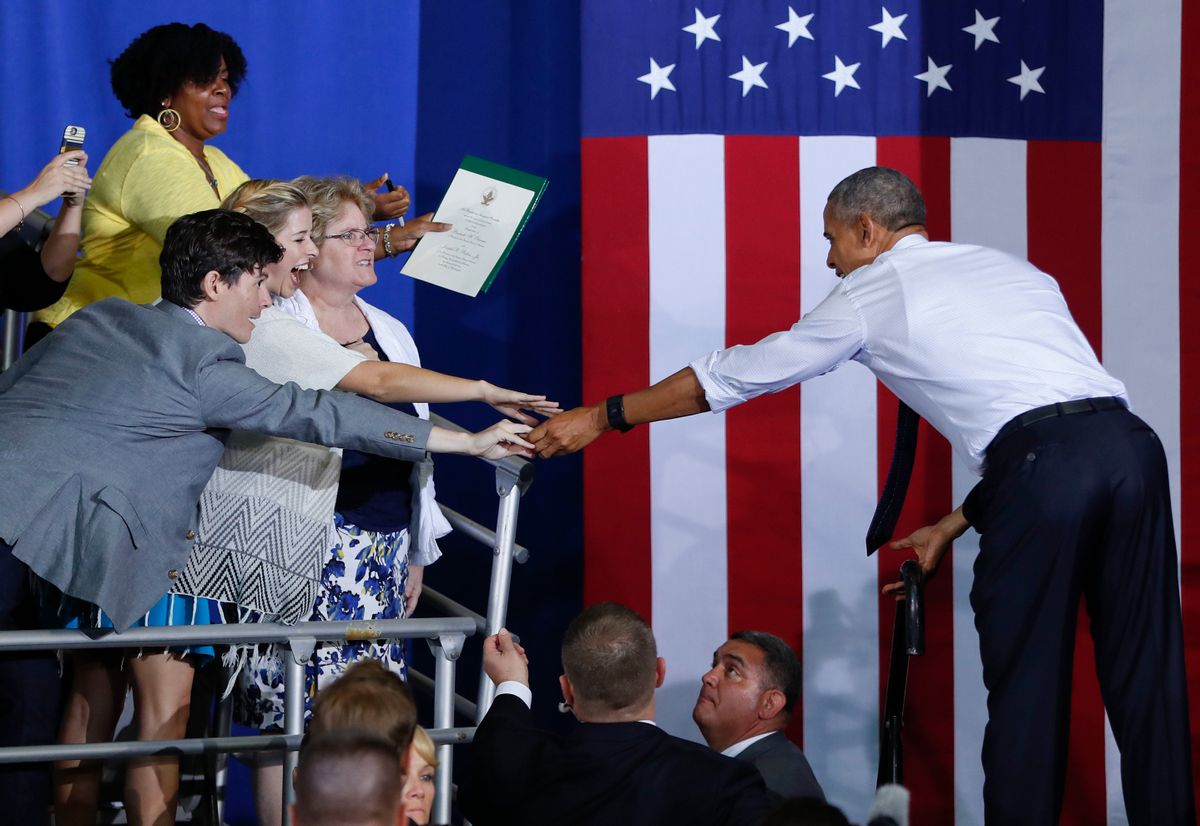 President Barack Obama reaches out to greet a group of women supporters after speaking at the University of North Florida in Jacksonville, Fla., Thursday, Nov. 3, 2016, during a campaign rally for Democratic presidential candidate Hillary Clinton. (AP Photo/Pablo Martinez Monsivais) (AP)
--

President Barack Obama intensely focused his fire on Republican nominee Donald Trump during a campaign stop this past weekend, blasting the GOP nominee for his reckless rhetoric and acting as a counterexample to Trump's divisive politics by embracing a child with  who Trump had earlier kicked out of his rally.

At his fourth campaign event in Florida in just 10 days on Sunday, the president set he record straight about the GOP nominee's misleading interpretation of an event days before. After a Trump supporter heckled Obama at a campaign stop in North Carolina on Thursday, Trump falsely said the president “spent so much time screaming at a protester.”

Trump “just made it up,” an incredulous Obama said, responding to Donald Trump's claims. “Didn’t just make it up,” he amended, “but said the exact opposite of what happened, with impunity.”

On Thursday Trump had falsely claimed the president “spent so much time screaming at a protester” who heckled him. In reality, Obama had called on the crowd to show civility and focus.

Obama also lamented on Sunday that Trump's egregious behavior had become normalized during the campaign.

“The point is, he thought it was OK to just lie,” Obama said. “Wasn’t even trying to be sneaky about it. That says something about how unacceptable behavior has become normal.”

Watch a montage of the two speeches, via Deadspin:

At the same campaign rally, Obama reiterated a point that he's made since the Democratic National Convention with a fresh line based on new reporting: Trump does not have the temperament to be commander in chief.

"Apparently, his campaign has taken away his Twitter," the Obama said, referring to a New York Times report indicating that Trump's staff has wrestled control of their boss' social-media account in the final days of the campaign. "In the last two days, they had so little confidence in his self-control, that they said, "We're just going to take away your Twitter."

After Obama's stop in Kissimmee, Florida, he took a moment to met with 12-year-old J.J. Holmes.

At Trump's final Tampa rally the day before, J.J. and his family had been booted from the premises on Trump's order.

According to his mother, Alison Holmes, it was J.J.'s wish to attend the rally as he is scared of what will happen to him and other children with disabilities if Trump becomes president. Trump made headlines last fall for imitating New York Times reporter Serge Kovaleski, who has arthrogryposis, a condition that reduces his arm's range of motion.

J.J. and his three sisters and mother were removed after chanting the name of Trump's Democratic rival Hillary Clinton during the rally.

“The crowd started chanting 'U-S-A' and pushing his wheelchair,” Alison Holmes told the Washington Post. “We were put out by security. Mr. Trump kept saying, 'Get them out.'"

Protestor pushing a child in a wheelchair appears to be kicked by Trump supporter. Happens :03 seconds in. 1/2 pic.twitter.com/LDr6E5NHvT

As his mother described their experience at Saturday’s Trump rally to the Post, J.J., speaking with the help of a computer vocalization device, interjected to say, “I hate Donald Trump.” Yesterday, this young man was kicked out of a Trump rally. As he was leaving, people kicked at his wheelchair. Today, he met his President. pic.twitter.com/VI4g2tKANG — Steve Schale (@steveschale) Nov. 6, 2016