The personal is political — and sartorial: The 2016 election as fashion disaster

Think the candidates are bad in 2016? Check out the egregious fashion statements. Can "Nasty Women" save the day? 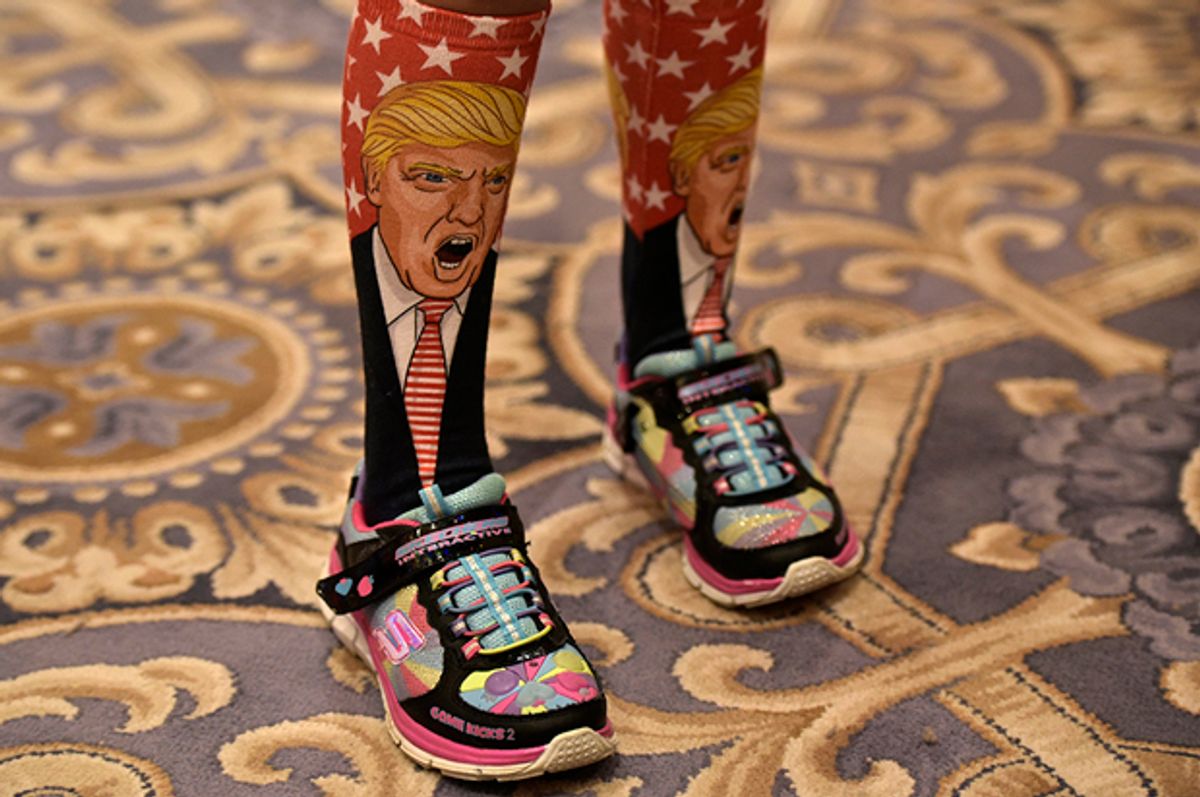 "Hillary sucks! But not like Monica." “If you don't bleed red, white and blue take your bitch ass home." "Donald F***in' Trump." And my personal favorite, "Trump that Bitch."

Folks, these are interesting times. Election 2016 has brought out the worst in people in oh-so-many ways, and fashion is no exception. Never before have sext scandals [sic], profanity, derisive campaigning and candidate merch been so truly ugly, and so widely acceptable. There are shirts, gag eyeglasses, and even yarmulkes with branded campaign slogans, some of which will make you shudder.

Donald Trump rallies have brought the fantastically rude slogans you see above and worse, with supporters lining up for the biggest consistent seller, “Trump that Bitch.” Hillary Clinton’s campaign has taken the high road with gentler slogans like “Love Trumps Hate.” Take a glance at the Internet, and the things you see will make you wonder if we are living through a Tim Burton-style nightmare. But even Burton would cringe at the utter lack of class American politics has assumed.

Usually, say those versed in fashion and costume trends, people wear their thoughts and feelings; this year is no exception, but the utter brutality of some language leaves academics concerned. “I strongly believe in self expression through costumes,” says Nancy Diehl, director of costume studies at New York University’s Steinhardt School of Culture, Education and Human Development. “But it would of course be dismaying to see someone dressed up as Hitler. The best [seasonal] costumes this year will be ones that we won’t even understand in 2018 ... ‘Nasty Women’ are going to be all over the place -- in New York, at least.”

Nasty women abound, indeed, and not just in the big cities. Many women, whether they have checked the box for Clinton or not, have adopted the “Nasty Woman” mantle, rendering Trump’s derogatory comment ineffective. Rather, it is now a battle cry for the post-feminist agenda.

Katy Perry was photographed wearing a very tight “Nasty Woman” T-shirt that left little to the imagination. Many variations on the theme pepper the Internet, and some women are loving the slogan so much, they’re leaving their shirts on -- overnight. Wendy Freeman Bradford, an outspoken writer of the blog Mama One to Three, is a mom and Hillary Clinton supporter who writes about parenting. This week, she posted on Facebook, “Guys, I'm still wearing yesterday's shirt. It says ‘Nasty Woman’ inside a heart. I may wear it until the election. Watch out.”

One designer I know, Alona Elkayam, used her position as head of a Biggie Smalls-inspired hip-hop street-style design company called Far From Timid to create a series of limited edition Nasty T-shirts.

“When we decided to launch the series, we got so much positive feedback from our community,” she said. “Mothers who want to teach their daughters how to lead, female millennials who are just starting to realize their voice matters. One mother told me she wanted her daughter to grow up like me, because I was the first person that ever showed her that beauty is second to mind. A T-shirt may not be a million-dollar donation or a library wing, but it’s a start."

Elkayam says she is concerned that many Trump supporters are comfortable with his constant denigration of women. “That really scared me,” she said. “Scared me into creating badge-of-honor ‘Nasty Women’ T’s. I am a feminist. Not the man-hating kind. I love men. I mean, I really love them. But I am a post-feminist feminist.”

And it’s not just T-shirts that are taking a side. Religious Jews are bringing their vote to synagogue, even though it is against tradition. The work-around? Trump and Clinton-branded kippot (the religious head-covers also known as yarmulkes) that “allow you to show your respect for God and the presidential candidate of your choice.”

The Clinton skullcap has her name embroidered, alongside the Hebrew letter “hey,” which is adapted to look like the Democratic candidate’s campaign logo. Trump’s white kippah reads “Make America great again” in Hebrew.

Americans may be mum about who they are voting for in conversation, but the eyes have it. The chest has it. The heads have it. Even kids are getting in on the act, such as the young Mexican boy pictured in a shirt stating "Deport this," and giving the camera the finger. The final 48 hours before the election will no doubt bring more visual surprises.