Watch: Anderson Cooper grills Kellyanne Conway on transparency: "We know a lot more about the Clinton Foundation than we know about your candidate's taxes"

The Trump campaign manager tried to spin out of her candidate's missteps, but it only made Cooper press harder 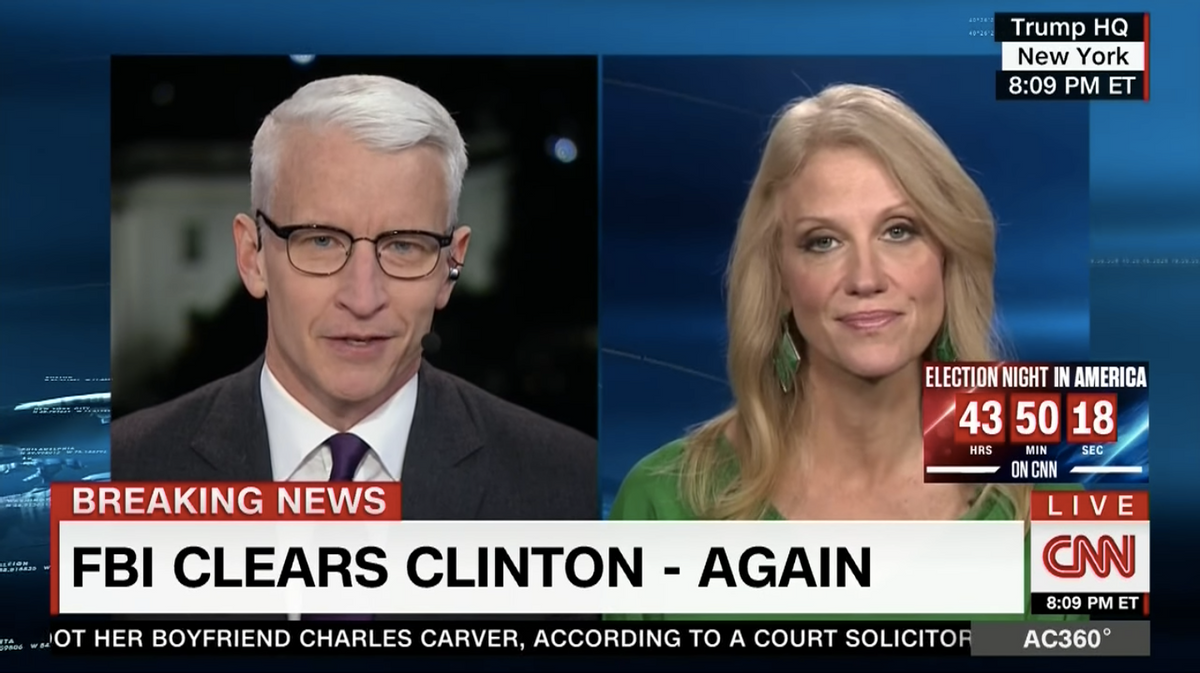 CNN's Anderson Cooper and Donald Trump's campaign manager Kellyanne Conway entered into a snippy exchange on Sunday night, as the election careens to a contentious finish.

At the outset of the interview, Cooper relentlessly questioned Conway about her boss' overstating Hillary Clinton's incrimination after FBI director James Comey wrote a letter to Congress announcing a review into newly discovered emails that the FBI ultimately found  had no impact on the previous investigation related to her private email server.

"Wasn't it irresponsible for [Republican nominee Trump], at that point, to be saying such things without having any facts, particularly now that Comey has come forward and said, 'There was nothing there?'" Cooper asked.

"He's welcome to speculate as to why FBI director Comey would make such an unprecedented move so close to the election," Conway responded.

The spin doctor then scolded the campaign for Hillary Trump's presidential bid for publicly attacking Comey, even though, as Cooper argued, Trump has been denigrating the FBI as "part of the rigged system."

Cooper pressed Conway to answer the question about whether Trump was irresponsible for misrepresenting Comey's letter. Conway fairly pointed out that everyone on CNN had speculated about the letter as well.

"If everyone jumped off a bridge, it doesn't mean you jump off a bridge too," Cooper retorted.

Conway spent most of the interview pivoting to the Clinton Foundation, arguing there is evidence that unscrupulous gifts were donated to the foundation while Clinton was secretary of state.

Instead of allowing Conway to recite her talking points, Cooper interrogated her about Trump's refusal to release his taxes.

Conway guaranteed that Trump did not receive a $1 million donation from Qatar.

"How do we know?" Cooper rightly asked.

Watch a clip of the interview below, via CNN: