After a bitter election, a new America: Our first female president and the most diverse coalition in history

While pundits obsess over the angry white folks behind Trump, the real story should be Hillary Clinton's majority 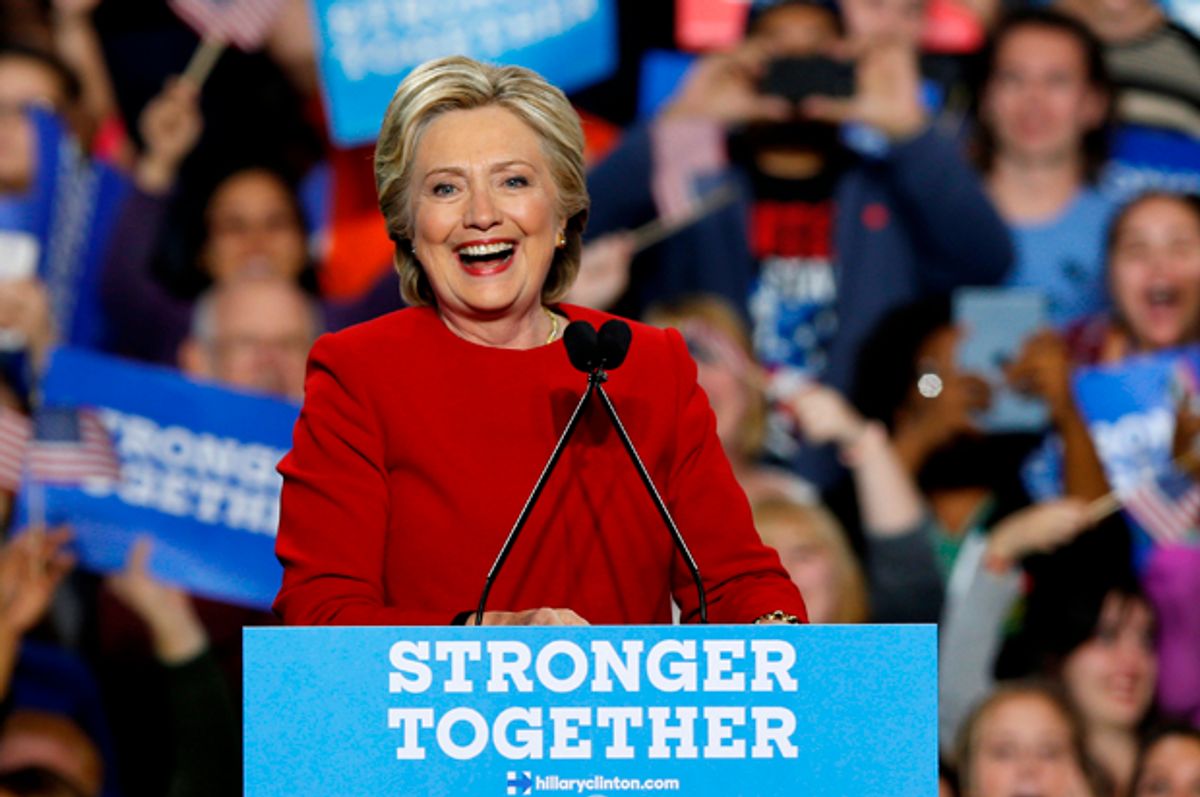 It's all over but the voting now. But if the polling is correct, Hillary Clinton should pull out a win. The main mystery at this point is where and by how much. But it was close enough in the important battleground states as of Monday night that anything can happen. So don't forget to vote!

Assuming the surge of Latino voters continues, the African-American vote meets certain targets and the younger voters turn out, the Obama coalition should comfortably reassemble. But there are some changes to it, and they could be significant. For the first time since polling began, a majority of white college-educated voters, an overwhelming number of them women, say they are voting for the Democratic presidential nominee, Clinton. There's been a trend in this direction for some years, but in 2016 it seems to be surpassing expectations.

And yes, as you may have heard, Clinton is not doing well with the non-college-educated white voters who make up the Donald Trump electorate. Polling even suggests that white working-class women are all in for Republican presidential nominee Trump. This is a large faction of the American public, to be sure, but it is a minority and it has been trending toward the Republicans for more than 30 years.

So what's happening is an acceleration of a long-standing trend realigning voters by class, race and region. The Democrats still have their base of African-Americans, urban liberals, single women, etc. But if Clinton wins on Tuesday night in Nevada, Colorado, Florida, North Carolina and Virginia (and possibly other locales), it will be because the new Democratic electorate leans more heavily on Latinos and college-educated whites in states where those populations tip the balance. From the looks of it, this coalition will include American Muslims, Asian-Americans and Native Americans as well.

Trump is polling well in Ohio. And he concluded his campaign in Michigan, so there is some thought that he might do better there than people had anticipated. If he carries either or both of those states, it might signal a real shift for both parties, exchanging the white working class for white college-educated voters and moving the center of gravity of both parties to different regions, the Democrats to the Sunbelt and the Republicans to the Midwest.

But regardless of what happens today, demographic trends are clear. This electorate is becoming more racially and ethnically diverse at the same time that a larger proportion of whites are going to college. And despite non-college-educated white women's gravitating to Trump in bigger than expected numbers, the overall gender gap between the parties has been huge for some time and continues to grow.

Yet for some reason the lesson of this election, at least among the pundit class, is not that we have this new diverse majority that coalesced behind the first African-American president and now behind the first woman to become the nominee of a major party. That's an exciting story, representing a sea change in American culture and political life. Who are these people, and what is their common set of values? What makes a Latino mechanic in Tucson, Arizona, vote for the same person as the college-educated female small business owner in Vermont? Why are middle- and upper-class African-Americans still loyal to the Democratic Party? Why do so many more women vote Democratic? Almost nothing has been said about any of this throughout this endless election season.

Instead, media outlets are obsessed with the other group, the white non-college-educated minority, particularly the angry white men who followed Trump. There have been dozens of articles trying to figure out what makes them tick. Meanwhile, a large coalition of voters who want to take the high road in dealing with some of the thorniest problems that are vexing other nations (immigration, assimilation, pluralism and religious freedom) is of no interest. A majority of Americans is on the cusp of validating the idea that equality, opportunity, tolerance and inclusion are the values we endorse, and it might as well not be happening.

According to the mainstream media, the message from this election is that the Democrats have let down oppressed white men and they must work to get them back in the fold if they want to be seen as legitimate. For instance, here's what Chris Matthews said on "Meet the Press," talking about the lessons Democrats supposedly have to learn from this election:

[I]f this election goes as your polls [are] showing it going with Hillary winning, there's still a huge minority of the country, almost 50-50 and probably more, that would've voted for Trump if it weren't for Trump. His issues were powerful. He tapped into anger. It was trade. It was uncontrolled immigration, wars we probably shouldn't have fought. . . . But the fact is the Democrats ought to recognize that they didn't win the argument. They didn't win the argument if they win the election. And they better be careful about that.

Actually, they did win the argument, if you understand that the Trump campaign ran on the premise that all our problems are caused by "the other" — meaning something other than white males. He told them the clock could be turned back to a time when it was acceptable for men to treat women like objects and for white people to act as if they owned the country and everyone else was just visiting.

This election isn't a referendum on the white working class, at least no more than it's an referendum on women's equality or working-class Latinos' economic concerns or Black Lives Matter or health care or climate change or anything else. Indeed, the proposition that the top priority of the new government, regardless of who wins, is to pass the Trump agenda is simply bizarre.

If Clinton wins tonight, her policies for the working class of all races and ethnicities go far beyond anything that Trump had to offer with his crude nativism and empty promises. If she is able to deliver, all these Trump voters will benefit even if they despise her. And they are, of course, welcome to join the coalition with immigrants and Muslims and African-Americans and uppity women and all the others if they like.

I suppose it's predictable that the message pundits like Matthews would take from the election of the first woman president, by the most diverse coalition in history, would be that white Republicans aren't getting the attention they deserve. That doesn't make it true. The angry working-class white folks who support Trump have always been regular Americans, just like the rest of us. They just didn't know it until now. Welcome to our world.