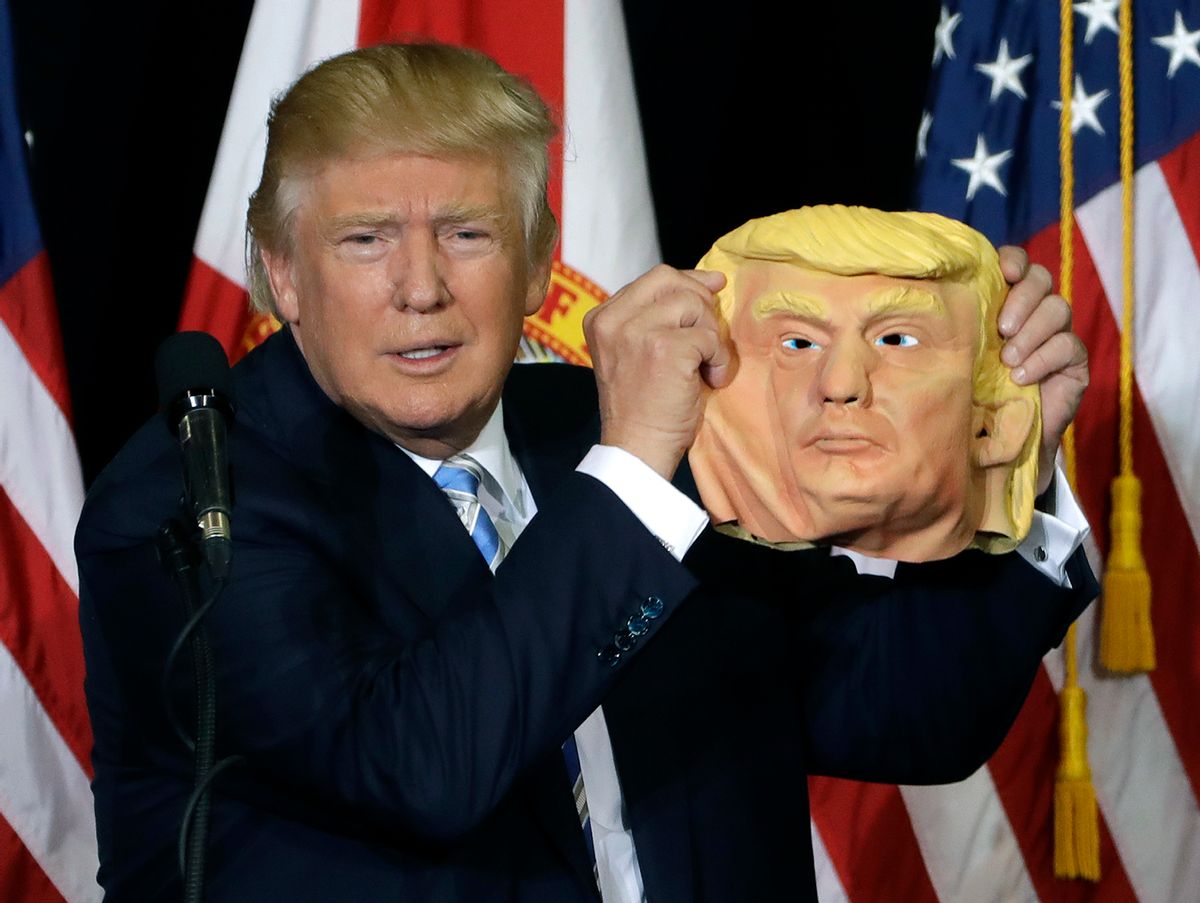 Whether Donald Trump wins or loses on Tuesday, Americans will have the Republican presidential nominee to thank for the end of the earnest use of the term “pivot” by political reporters and pundits.

“Google ‘Trump pivot’ and you get about 707,000 search results,” conservative pundit S.E. Cupp noted in August, months after the word had outworn its euphemistic appeal.

The so-called pivot refers to the expectation that at some point a leading presidential candidate will transform into a more suitable version of a likely nominee. Trump, his supporters argued throughout the Republican presidential primary, was eventually going to “pivot” his attention away from his hard-core base of loyalists in order to win over the broader general electorate. (All candidates tend to do this. Remember Mitt Romney using the "Etch A Sketch" strategy?)

And it wasn’t just Trump supporters who touted an upcoming presidential pivot. Republicans had been announcing, for months, that Trump would be “pivoting” to a more moderate persona for the rest of the presidential election. Trump would relinquish the flamboyant, improvisational style that won him the primary and moderate while following a script, Republicans argued as a rationale to lift a political novice to the highest seat in the land. Lots of them fell for it, too.

In January, conservatives promised that if Trump made it to the general election, he would “pivot” to the center.
“You can see [Trump] saying, ‘We had to do what we had to do to win the primary, but now’s the general and we’ve got to beat Hillary,’” Alex Castellanos, a Republican strategist, told The Washington Post. “You can see him pivot on a dime.”

Trump himself promised as much as it became clearer he would knock out 16 opponents to win the GOP nomination.

“As I get closer and closer to the goal, it’s gonna get different,” he vowed to former Fox News host Greta Van Susteren in March. “I will be changing very rapidly. I’m very capable of changing to anything I want to change to.”

Then after knocking off an unprecedented primary field made up of potentially historic nominees (including some that be the first Latinos to be so named), Trump hinted at a pivot only to again dismiss the idea.

“I sort of don’t like toning it down,” the real estate mogul said back in April, giddily mocking the idea that he might be reined in.

In July, Mitch McConnell hoped aloud that Trump would be “more serious and credible,” though the Senate majority leader said he’d settle for “having a prepared text and teleprompter and staying on message.”
On the eve of the GOP's national convention in Cleveland, Reince Priebus, chairman of the Republican National Committee, assured ABC’s George Stephanopoulos that Trump “knows the pivot is important.”
“Thursday night, Donald Trump on the stage delivering a great speech is going to go a long way for Donald Trump in pivoting to the general” election, Priebus said.
Without evidence, Trump and his Republican backers repeatedly insisted that the candidate who refused to rule out a third-party campaign, threatened to “spill the beans” on Sen. Ted Cruz’s wife and boasted he could shoot a person in New York City and not lose any followers would magically change overnight.
After his roughneck campaign manager Corey Lewandowski was caught on tape grabbing a female reporter, Paul Manafort — a veteran political operative — was hired to infuse the Trump campaign with professionalism at midsummer.
Still, Trump refused to moderate.
August

But three days later, his campaign was touting a major pivot.

Trump finally got a teleprompter and got on a message. In a widely acclaimed August speech, the GOP nominee even expressed a bit of regret about his past antics.

“Sometimes in the heat of debate and speaking on a multitude of issues you don’t choose the right words or you say the wrong thing. I have done that,” Trump said to laughter and cheers from his supporters. “And believe it or not I regret it. And I do regret it, particularly where it may have caused personal pain. Too much is at stake is for us to be consumed by these issues, but one thing I can promise you is this: I will always tell you the truth,” he said.

Trump’s pivot had finally arrived — at least that is how the press reported the moment on Aug. 18.

Three and a half months after sealing the Republican nomination, Donald Trump pivoted to contest the general election on Thursday night, expressing regret for his past failures to “choose the right words” and delivering one of the most comprehensive, on-message rationales for his candidacy to date.

Donald Trump on Thursday shelved his guiding mantra -- never back down, never apologize -- and did what he has refused to do in public in more than a year of campaigning.

Still, in the end, it appeared that it wasn’t any easier to pivot the Trump campaign towards professionalism than to steer the man himself.

Only three days after Trump’s so-called August pivot, his second campaign manager resigned amid a torrent of news stories alleging that he had helped a Ukrainian oligarch and political leaders in contravention of U.S. interests.

Republicans kept their heads dug deep in the sand.

“Yes, Trump Pivoted,” National Review editor Rich Lowry headlined a story in September, arguing that “his campaign has done much more to get him in settings where he isn’t shouting, and that can only help him.”

But by the third debate in late October, it had become clear that Trump’s rhetoric, campaign and policies had not actually moderated. Here's an overview of the candidate's stance on three key issues:

Trump never shifted his hard-line stance on immigration. Despite some waffling, by the campaign's October stretch Trump reiterated his call for a wall on the U.S.-Mexico border and the deportation of “bad people” from Mexico that had kicked off his demagogic run for the White House.

His line in the final debate “We have some bad hombres here, and we’re going to get them out” was no different from his infamous tirade during his presidential announcement: “When Mexico sends its people, they're not sending their best. They're sending people that have lots of problems, and they're bringing those problems to us. They're bringing drugs. They're bringing crime. They're rapists."

Muslim ban
While Trump spent a year standing by the Muslim ban — despite fellow Republicans' saying such a proposal would be both “offensive and unconstitutional,” as his running mate Mike Pence had once put it — Republicans insisted he would pivot away toward a more reasonable response to terror attacks in the U.S.

In mid-July at the Republican Convention Priebus argued on CNN’s “State of the Union, “He has pivoted to this position,” explaining that Trump’s position “is not a religious test. It is a ban on immigration from countries that harbor or train terrorists ”

A week later, Trump made clear he wasn’t pivoting away from his proposed Muslim ban but expanding it.

“I actually don't think it's a rollback. In fact, you could say it's an expansion," Trump told NBC’s Chuck Todd. "I'm looking now at territory. People were so upset when I used the word Muslim: 'Oh, you can't use the word "Muslim."' Remember this. And I'm OK with that, because I'm talking territory instead of Muslim."

Far from pivoting away from his very personalized attacks against the appearance of high-profile women, Trump kept a steady drumbeat.

After Fox News host Megyn Kelly questioned his treatment of women at the first GOP debate in August 2015, Trump followed up by referencing her menstrual cycle. At another debate he slammed the appearance of his Republican rival Carly Fiorina. And then this past September, Trump devoted a 3 a.m. tweetstorm to shaming the looks of a former Miss Universe, Alicia Machado, whom rival Hillary Clinton said he had mistreated 20 years ago.

“I think he’s great when he pivots,” campaign manager Kellyanne Conway told MSNBC after her candidate threw a late-night Twitter tantrum over former Miss Universe. “I would encourage him to do even more pivoting,” she said.

Now, as reports of the campaign’s final days depict a Trump more focused on exacting revenge than winning the election, one thing should be clear even to Republicans: One hundred and eight-six days since his last opponent dropped out and 111 days since he accepted the nomination, it is clear that Trump never really was running for president — because he never made the customary presidential pivot.