If Trump wins, say goodbye to your black friends: A modest proposal

If Trump wins, we're outta here — Atlanta can be the capital of a new black nation. Maybe we'll build a wall! 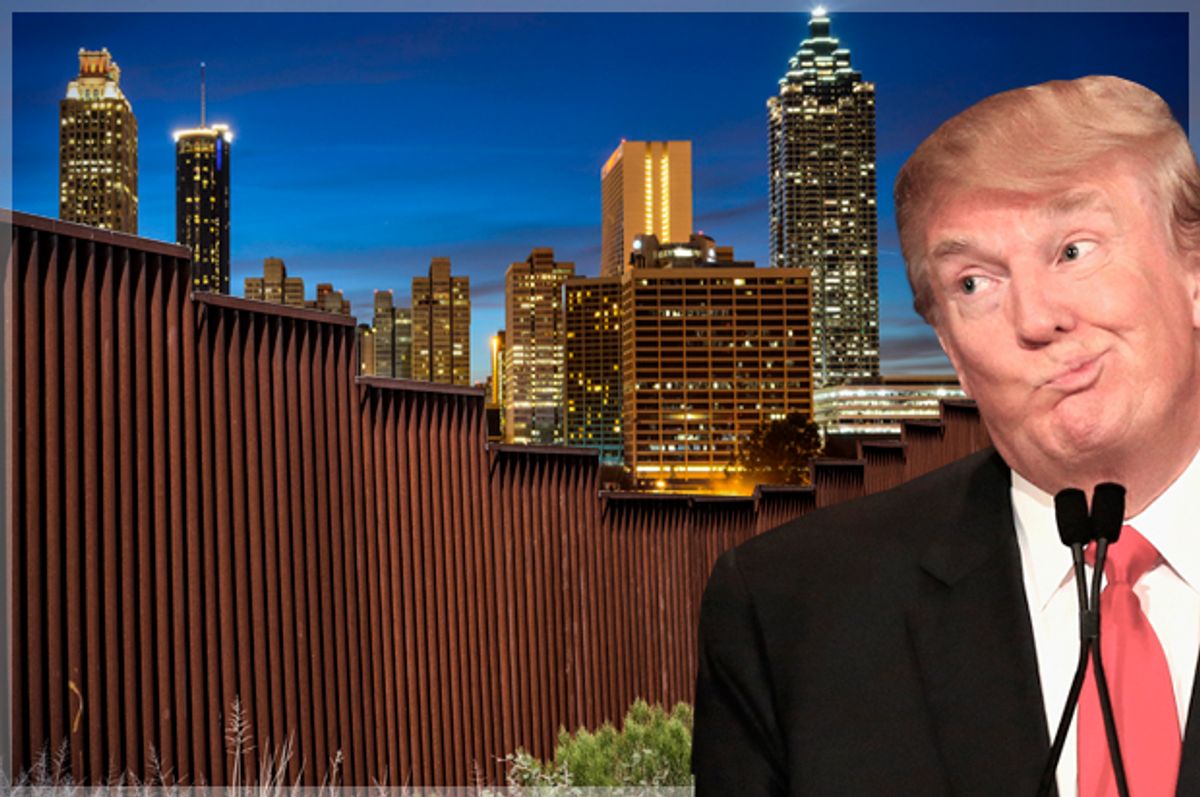 Allan Lichtman gave me my first real scare of this election season. Don’t get me wrong ­­— the idea that millions of people are dumb enough to support a sexual-assaulting, spoiled, self-contradicting, small-faced racist with no political experience is scary. At my core, however, it never felt real. Say what you want about America, we couldn’t really elect a clown like Donald Trump. We're not that stupid, are we? Well, I didn’t think so, but Lichtman feels differently.

For those who don’t know, Lichtman is a history professor at American University, and author of the book "Predicting the Next President," which offers a system for determining presidential election winners. Litchman has successfully called the last nine presidential elections well before results were in, even in really tight races like George W. Bush vs. Al Gore and Barack Obama vs. Mitt Romney. His selection for this year is Donald Trump. Trump fits his system, which has a clear history of being nonpartisan; Lichtman has been working the media circuit, letting us know that we should be getting ready for four years of Donald. Oh f**k.

For all I know, Lichtman may be right. The signs are everywhere: It’s so bad that even Beyoncé is campaigning for Hillary Clinton and performing at the Country Music Awards! What’s a black person to do? Trump, who is struggling to get even 1 percent of the black vote, has a reputation for being vindictive and seeking revenge on anyone and everyone who has ever done him wrong, opposed his stupid ideas, called him out on his BS or disagreed with him in any way. So imagine what will happen to African-Americans under his reign! I thought about this all night and came up with some solutions.

First of all, certain black people will be fine. If you play in the NBA or the NFL, if you speak with a Jamaican accent, ­­if you are Lil Wayne or if you specialize in preparing any type of well-seasoned ethnic food, you are OK. Trump, like most rich white people, loves these things and your American experience will remain safe. It actually might improve! The rest of us are doomed, unless we can make it to a safe space.

Donald can’t send us to Africa, and the idea of a massive black migration to Canada is unrealistic. But we can all make to Atlanta, which might be the most progressive black-majority city in our country. It’s kind of how Brooklyn is for white people now. There’s an endless number of black lawyers, doctors, accountants and business owners — plus everybody is nice and they’ll all love to take a listen to your mixtape.

Beyond all that, maybe we can pool our money together, redefine education, start our own army and even build a wall. A real wall — far more impressive than the one Donald is lying about building between us and Mexico. A massive bulletproof structure to separate us from Trump, the KKK, his supporters, his KKK supporters, all the heavily armed George Zimmerman types and the rest of the morons who hate and or try to destroy blackness — like Ben Carson and Stacey Dash.

I would also like to extend the invitation to all Mexicans as well­­­­ — because even though we disagree on everything from dance moves to our taste in music to the way we wear our jeans to how rice should be prepared­­, we all have to unite and protect ourselves from Donald Trump and the long list of angry supporters who are going to be even angrier when he doesn’t make good on any of his promises.

Trump’s telling these people that he is going to get them their jobs back. As if their jobs weren’t replaced by robots years ago, and as if greedy corporate overlords are going to stop outsourcing jobs because Trump tells them to. Please! Their expectations are going to make their suffering that much worse — whereas, as a black person who has read a few history books, I don’t think my expectations can get any lower.

But maybe I'm worrying too much, Nate Silver of FiveThirtyEight, who also has a history of being right, is predicting a Clinton win by a landslide, and Lichtman’s system has never considered such an obviously unqualified candidate. Our previous 44 presidents have all held some sort of public office, whereas Trump has never been elected (or appointed) to run anything. So hopefully that is enough of a glitch to throw his system off. If it’s not, say goodbye to all your black friends — if we like you, maybe you can get a visa to come see us in Atlanta.