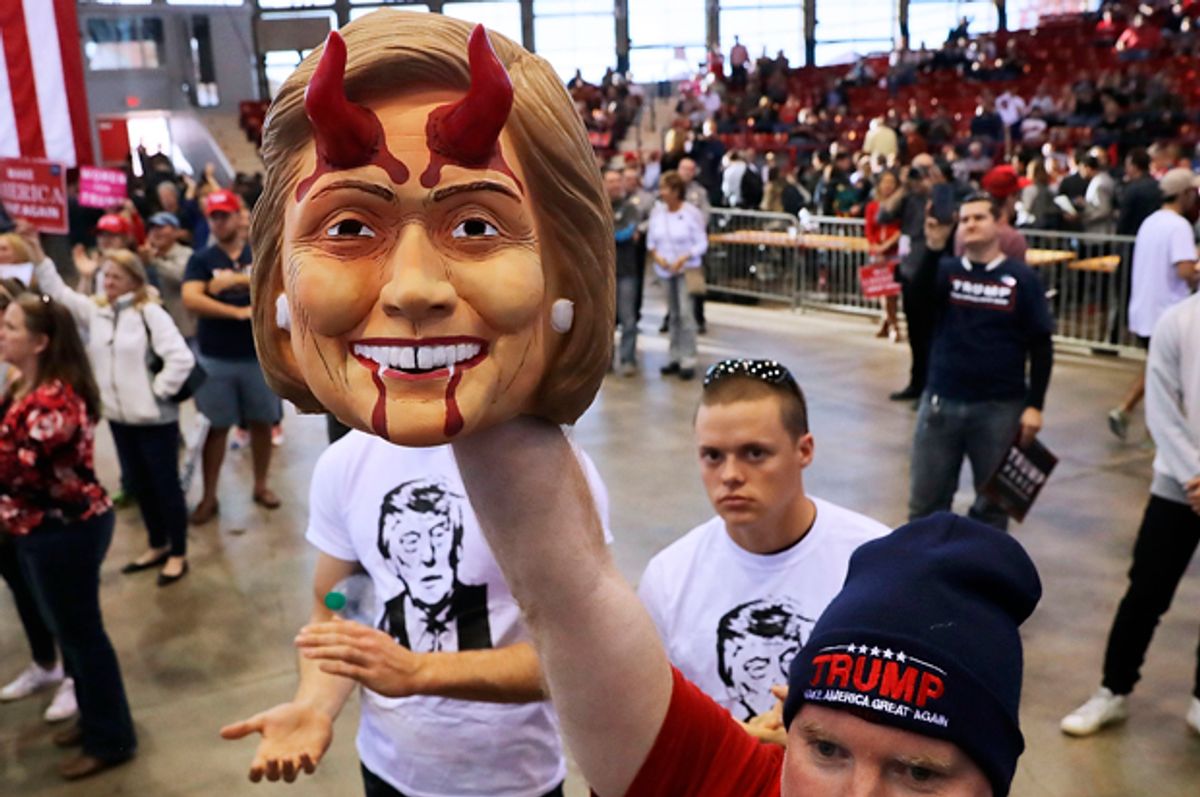 During an ABC interview in 1994, Donald Trump told Nancy Collins that "putting a wife to work is a very dangerous thing" because it deprives her of the "softness" he expects in a woman.

While he "allowed" his then-wife Marla Maples to work, he sounded regretful about allowing her that much freedom.

"And I have days where, if I come home — and I don't want to sound too much like a chauvinist — but when I come home and dinner's not ready, I go through the roof," he said, clearly unaware of how abusive that sounds.

There's a direct line from Trump's vision of sequestering a woman in the kitchen to the present-day crowds of conservative voters, boiling with their hatred of Democratic presidential Hillary Clinton, chanting, "Lock her up! Lock her up!"

The crazed right-wing reaction to a possible Hillary Clinton presidency evokes the hostile reception of the election of the nation's first black president, Barack Obama, which resembled strategies to delegitimize black citizenship in the Jim Crow era. Demands that Obama produce his birth certificate directly echoed poll taxes and literacy tests of the past. No matter how many birth certificates Obama could produce, conspiracy theorists like Trump, the current Republican presidential nominee, would say that they weren't proof enough. Birthers don't use the N-word, after all, but that's what they're saying when they demand to see the birth certificate.

No one is questioning Clinton's citizenship. Rather, the misogynist rhetoric toward Clinton has taken a different, more gendered form. Unfortunately, it's a form that is starting to uncomfortably resemble the tactics that abusers use to assert dominance over the women they target.

It might seem heavy-handed to point that out, but it's not like Clinton's right-wing haters are overly concerned about subtlety. And while most do manage to not yell "get back in the kitchen" at her, "lock her up" is a thinly veiled version of the same sentiment.

Abusive men use four general strategies to dominate their female victims: limiting their freedom, stalking and surveillance, gaslighting and threatening or even using violence to keep them in line.

Those are also the same four rhetorical strategies that Republicans have been using to delegitimize Clinton's run and her potential presidency. These tactics may not seem sexist on the surface, but the overall pattern points to a tendency to treat Clinton like a woman who needs to be put in her place.

Abusers like to keep women trapped at home, where they can control them. They may discourage their victims from having outside relationships and sometimes even forbid them from working.

This misogynist urge, when translated to political rhetoric applied to Clinton, becomes pretty damn literal: Lock her up!

Trump openly threatened to jail Clinton during the second presidential debate, and his fans have been celebrating with costumes and images of Trump hauling Clinton around in chains. On Thursday, Dallas Woodhouse, executive director of the North Carolina Republican Party, literally held up a pair on handcuffs on MSNBC to threaten Clinton.

The supposed crime committed by Clinton is always vague to the men who wallow in the visceral pleasure of imagining her chained up. That's because her real offense, in their eyes, is her feminism. If she won't submit to male authority meekly, then they wish to drag her off, shackled.

Abusive men are big on constant surveillance. Abusive men may target women they're not romantically involved with and stalk them — following these women around, letting them know they're being watched, sending them messages that they have discovered private details about their lives.

Sometimes men will stalk the women they are involved with; they will often rifle through their phones, monitor their conversations and even hang around their workplace.

Monitoring a victim's email is a widespread tactic of abusers.

Clinton's haters are making it clear that if she persists in thinking she has a right to run for president,  she'll hear the strains of The Police's "Every Breath You Take" everywhere she goes.

The daily drip-drip by WikiLeaks of Clinton-related emails contributes to the problem, especially as the organization continues to publish messages that are politically irrelevant and are meant only to signal that the target's every move or habit — including cooking details — is being monitored.

Congressional Republicans cannot hide their glee about how they intend, using a bunch of bullshit pretenses, to start subpoenaing everything they can about Clinton the second she sets a toe in the Oval Office. Anti-Clinton fanatics at the FBI keep leaking claims that they have real dirt on her, which is hard to believe since the leakers seem to be getting their leads from the folks at Breitbart.

Clinton has had right-wingers rooting through her panty drawer for two and a half decades now, and they haven't found anything substantive. But actually finding something isn't really the point of the nonstop surveillance. It's about asserting control over her life.

Republicans can't imprison Clinton, but they can fulfill the misogynist fantasy of strapping a woman to a desk and bombarding her for 11 hours with accusations designed to make her look and feel worthless (not that it has worked).

An abuser controls, stalks and degrades his victim, but when the victim fights back, the abuser always says she had it coming. False accusations are lobbed at her head — that she's crazy, cheating, stupid, is a bitch — and these accusations are used to justify the abusive behavior. He has to control her, you see, because she cannot be trusted.

Gaslighting is about putting the victim into a headspace where she doubts herself. She knows she isn't crazy or cheating or lying, but the relentless accusations start to make her question herself. Is she crazy? Does he see something she doesn't see? Surely he wouldn't be making all these accusations all the time if there weren't some reason for it, right?

Clinton appears to be immune to the gaslighting, but the strategy has proved effective for the right when the media covers (and thus amplifies) the false accusations. The relentless drumbeat of false accusations against Clinton has caused an air of suspicion to swirl around her, resulting in a media firestorm every time another false accusation is lobbed. That there is no evidence of this corruption hardly matters. As the gaslighter knows, simply accusing someone long and hard enough can be enough to stoke doubts about them.

Some abusers hit their victims. Some merely let the possibility of violence hang in the air. Either way, the purpose is to keep the woman on her toes. She is afraid to resist him, out of fear that this will be the time he erupts in a cascade of violence on her.

As the election has drawn nearer, the number has surged of Republican men who can't help but threaten Clinton with violence. Trump adviser Al Baldasaro also recommended death by firing squad for Clinton in August. During the Values Voters summit in September Kentucky Gov. Matt Bevin insinuated a threat of bloodshed if Clinton were elected. At a recent fundraiser at the end of October, Sen. Richard Burr joked about shooting a "bull's-eye" with Clinton's picture on it.  Oklahoma state Rep. John Bennett suggested a "firing squad" for Clinton in a recent early November Facebook post.

It's hard to remember this far back in the outrage-of-the-day cycle, but Trump himself made a "joking" threat on Clinton's life in August:

And if his dinner isn't on the table, he's going to hit the roof.