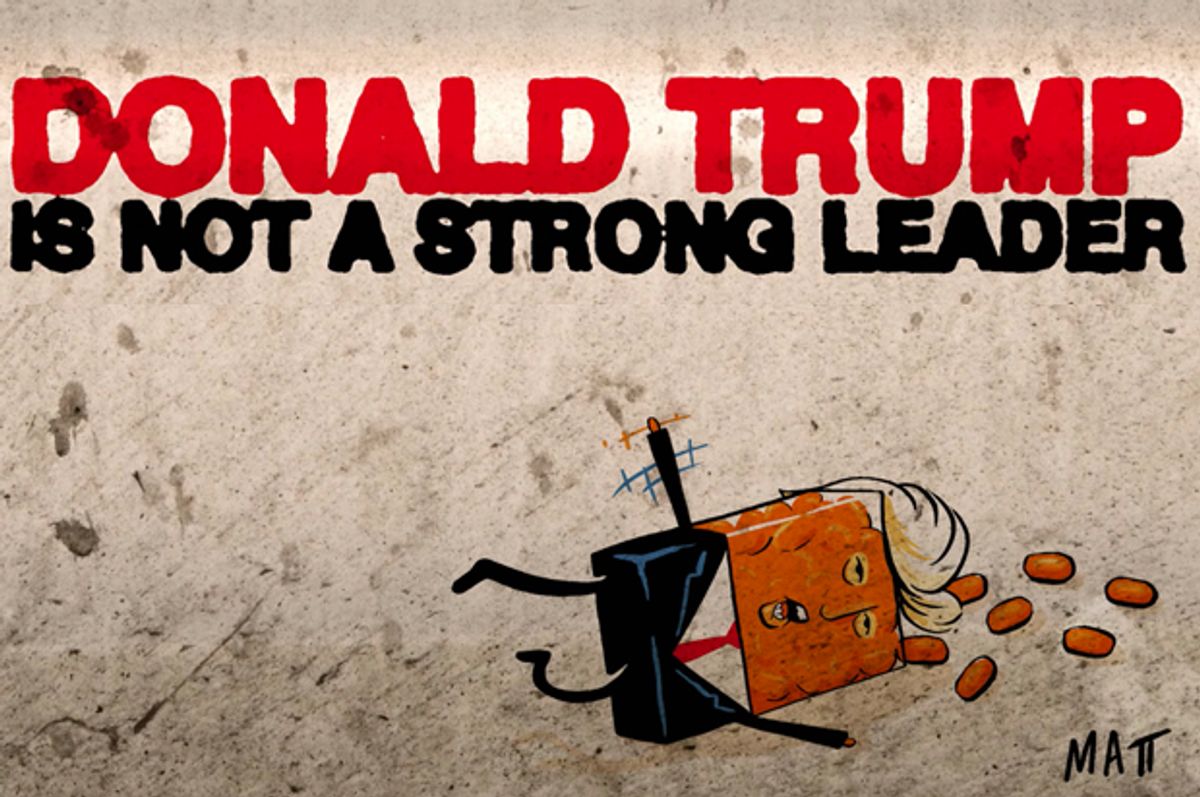 When novelist and McSweeney’s guru Dave Eggers went to a rally for Republican candidate Donald Trump in Sacramento, California, in June, he was startled to see the role that music played in rousing the assembled. “I was surprised to hear Elton John’s ‘Tiny Dancer’ played while Trump’s plane taxied toward the rally,” he told Entertainment Weekly. “It was hilarious and perverse, and had a very emasculating effect on the man who stepped out of the plane. So it made me think that the right song had the power to puncture the unholy orb of pressurized hatred that is Trump.”

Songs built around political campaigns don’t have a terribly strong track record or long shelf life. Nor do songs chosen by candidates — how about the Clintons' constant use of “Don’t Stop (Thinking About Tomorrow)”? — tend to be the most daring or original numbers.

But Eggers wanted to try something kind of the same but a little bit different: a Spotify playlist that would inspire fans of Democratic candidate Hillary Clinton or piss off Donald Trump supporters. So he and music manager Jordan Kurland tracked down artists they liked or had a record of liberal politics for their 30 Days, 30 Songs project. Before long, musicians started approaching the two with their new tunes, and the list may hit 50 songs by the end of Election Day.

So how does the playlist work out?

A lot of the songs here — like most songs in general — are mixed successes. Franz Ferdinand has been one of indie rock’s smartest and freshest groups. Its song “Demagogue” has a typically hooky bass line, but the lyrics (“Those pussy-grabbing fingers won’t let go of me now”) are not particularly imaginative. Ani DiFranco’s “Play God (Live From Red Rocks)” expresses pro-choice, pro-woman sentiments that will cheer most Salon readers. But it is, like a lot of what’s here, an exercise in preaching to the converted.

The list’s opening track, Death Cab for Cutie’s “Million Dollar Loan,” turns on the Republican candidate’s youthful privilege. (“It has not been easy for me,” Trump told Matt Lauer. “I started off in Brooklyn. My father gave me a small loan of a million dollars. I came into Manhattan and I had to pay him back, and I had to pay him back with interest.”) On the mostly wonderful public radio station where I live, in Los Angeles, this song has been played to death, and I think I never need to hear it again. By contrast, the heavily played Jim James' song, "Same Old Lie," bears little resemblance to his bourbon-soaked mysticism when he plays with his band My Morning Jacket and should stand up quite well over time.

Others have a real appeal: Adia Victoria’s “Backwards Blues” has some of the spare eeriness of early Cat Power. Wesley Stace's live solo acoustic “Hey Mr. Tangerine Man” — a Dylan homage about Trump and his famous hair — veers between hilarious and too clever by half. Blake Hazard’s “Little Situation” is not the strongest political critique here but is refreshing in its musical sunniness and sweet female vocals. Other songs Ledinsky’s “DonaldTrumpMakesMeWannaSmokeCrack” is just kinda of obvious or slight.

One of Moby’s song, “Little Failure,” features a voiceover that is not entirely accurate and not particularly artful. (“What a lot of people don’t know is that he inherited $600 million from his father.” There's some truth to that because of a business that Trump inherited part of, but it's a little glib.) A lot wittier and more fun is Moby’s parodic “Trump Is on Your Side.” (“When he doesn't pay his workers and calls them slobs/ It’s only because he cares about American jobs.”)

Mexican singer Lila Downs’ “The Demagogue” is deadly earnest but also effective at building a case against him.

The best melody on the whole set may be U.S. Elevators’ rousing “Old Man Trump,” which has moments that sound like early Teenage Fanclub. Mirah’s distorted-guitar anthem “No Guns No Guns” comes close.

For one of the McSweeney’s empire's dominant constituency — veterans of the alternative-radio and indie-rock wars of the '80s and '90s — there are some familiar names here. Bob Mould’s noisy and propulsive “In a Free Land” will stir fans of Husker Dü and his early solo career. Indie pioneers Mission of Burma offer “Panic is No Option,” which brings some of the old magical chaos.

Alt-rock hero Mark Kozalek was brilliant in his old band the Red House Painters. But his song here, “The Greatest Conversation Ever in the History of the Universe,” goes on way too long despite a pleasantly shimmering surface and is far more about the singer’s bohemian youth than politics. (He tells those of who don’t like his song to “fuck off” because he’s singing “from the heart.” All he needs to do is use the phase “tell it like it is” and he could be a Trump voter.)

A few songs overreach in their lyrics. Philadelphia rapper Vinnie Paz is a hell of a writer and has strong beats and a great keyboard line on his song “Writings on Disobedience and Democracy.” But, damn, do we really want to stand up to Trump with a song that begins by running down the U.S. effort in World War II?

At least one song might become beloved among supporters of the short-fingered vulgarian: The Long Winters’ “Make America Great Again” — the Seattle band’s first new song in a decade — is sung in the voice of a heartland champion of American pride. “Well, I watch the news and I know what’s what/ I go to rockin’ worship and I pray.”

Overall, these songs are all over the place in terms of their lyrics and musical styles, as well as quality. Will any of these songs join political classics like The Clash’s “Spanish Bombs,” Elvis Costello’s “Oliver’s Army,” Bob Dylan’s “Hurricane,” Bruce Springsteen’s postindustrial laments or Nina Simone’s classic protest songs about the Jim Crow South? Time, of course, will tell, but it’s nice to see someone trying.