Here are the top 5 moments that built up to the Nov. 8 climax 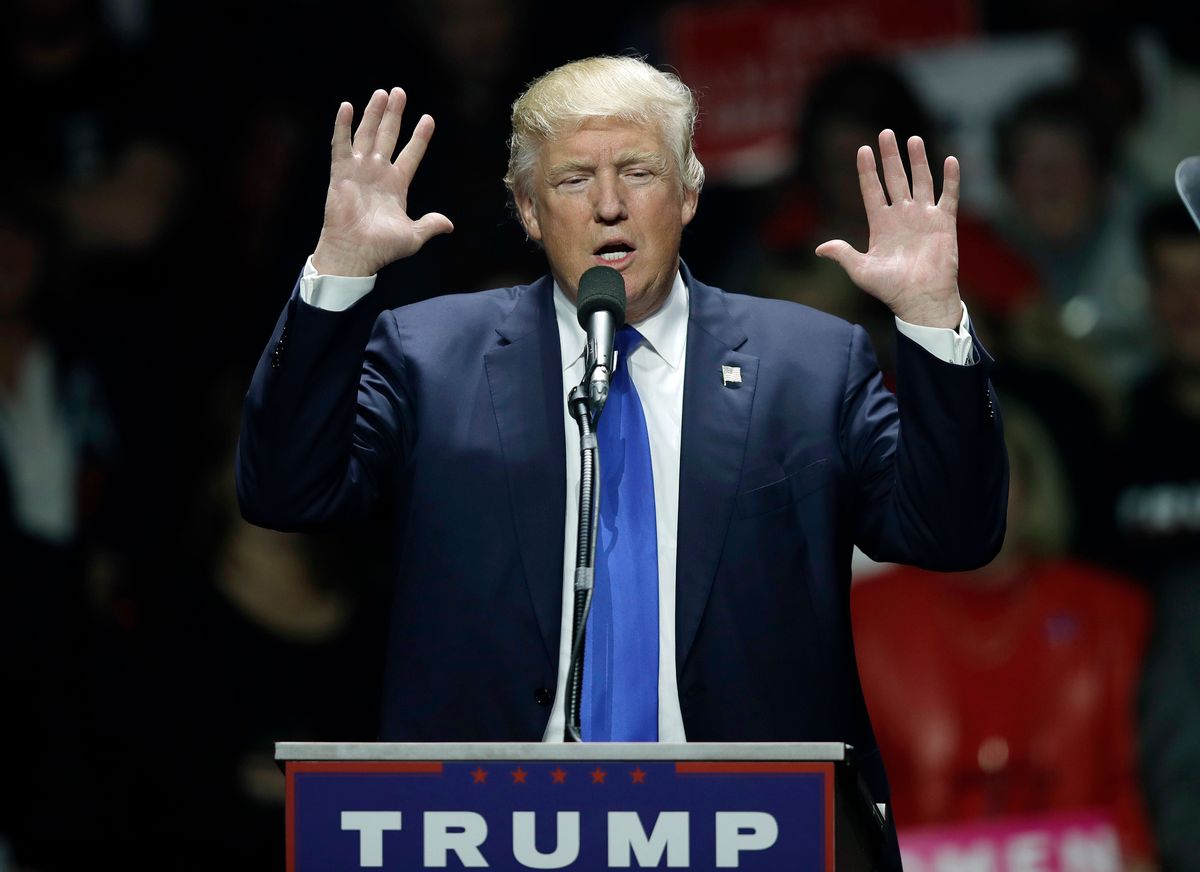 For a man with an elementary school vocabulary, Donald Trump is blessed with a middle school sense of humor.

We thought we knew what was coming back in June 2015, when he made his presidential announcement by calling Mexican immigrants "rapists." But sex — often scandalous — took the lead from racism at the mid point of the general and never looked back. This election season has been filled with sex and innuendo — after all, a leaked videotape in which he boasted of grabbing women by the pussy was only bested by the women came out to say he actually did it.

America never before witnessed a presidential candidate who talked about sex with the same candor that Donald Trump did. Here are the top moments that made us all a bit squeamish.

If not remembered for being the most quickly impeached president, Republican presidential nominee, Donald Trump will go down in history as the man with the tiny, orange hands. Florida Sen. Marco Rubio, who isn’t laughing anymore, first made fun of Trump’s hampster hands at a rally during the primaries. Rubio was actually defending himself from the now-forgotten, Trump-given nickname “Little Marco.”

“For someone who’s 6-foot-2, he has the hands of someone who’s 5-foot-2, and you know what they say about men with small hands —” Rubio said to a group of bemused supporters in February.

“Look at those hands. Are they small hands?" Trump said. "And he referred to my hands ‘if they’re small, something else must be small.’ I guarantee you there’s no problem. I guarantee you.”

2. "Blood coming out of her wherever"

Trump hit below the belt again when he criticized Megyn Kelly during an interview with CNN's Don Lemon. Trump spurned Kelly for asking tough questions at the GOP debate in August 2015 by alluding to the Fox News host's menstrual cycle.

After the GOP debate in August 2016, Trump tweeted and retweeted about Megyn Kelly, calling her a bimbo.

3. A presidential contender tells America to watch a sex tape

At the end of the first debate in September, Clinton killed racism and sexism when she called out Trump’s comments about former Miss Universe Alicia Machado, whom he called “Miss Piggy” and “Miss Housekeeping."

For days after the debate, The Donald steamed about the "Miss Piggy" comment. He finally erupted into a tweetstorm in the early morning hours of Sept. 30. He attacked Machado, accusing her of having a sex tape.

Did Crooked Hillary help disgusting (check out sex tape and past) Alicia M become a U.S. citizen so she could use her in the debate? — Donald J. Trump (@realDonaldTrump) September 30, 2016

Using Alicia M in the debate as a paragon of virtue just shows that Crooked Hillary suffers from BAD JUDGEMENT! Hillary was set up by a con. — Donald J. Trump (@realDonaldTrump) September 30, 2016

Wow, Crooked Hillary was duped and used by my worst Miss U. Hillary floated her as an "angel" without checking her past, which is terrible! — Donald J. Trump (@realDonaldTrump) September 30, 2016

4. All in the Family: Trump invites Clinton to get involved in pussy-grabbing action with a Bush

Billy Bush, the nephew of President George H.W. Bush, had a hot mic conversation in 2005 with Donald Trump during which Trump bragged about sexually assaulting women. The conversation was released on the Friday before the second debate.

Trump’s immediate response was released on his website in a brief statement.

"This was locker room banter . . . Bill Clinton has said far worse to me on the golf course."

Down-ballot Republicans cringed and started putting as much distance between themselves and the presidential candidate as possible. Many said they couldn't stand behind Trump, even his running mate, Indiana Governor Mike Pence.

5. From sex jokes to sexism: We learned way too much about what Donald Trump may have done with his small hands

Less than a week after the second debate, The New York Times and People magazine reported on three women who said the Republican nominee sexually assaulted them — the stories all came out on Oct. 12.

Jessica Leeds said that Trump assaulted her on a plane. Rachel Crooks said that he kissed her inappropriately when she was a receptionist at Bayrock Group in Trump Tower. Writer Natasha Stiynoff claimed that Trump cornered her at his Mar-a-Lago estate in 2005 during his first wedding anniversary to his third wife, Melania.

In total, more than a dozen women came forward to accuse Trump of sexual assault.

Trump's jokes throughout the election toed the lines of sex and sexism, testing what remained of the Republican party and bringing "the issue of how to treat women" to the political forefront.

Ivanka Trump, for tolerating her father’s creepy, incestuous jokes: "Yeah, she's really something, and what a beauty, that one. If I weren't happily married and, ya know, her father . . . "

Rosie O'Donnell's for tolerating attacks from Trump during the GOP and presidential debates.  "You know, Hillary is hitting me with tremendous commercials. Some of it’s said in entertainment. Some of it’s said — somebody who’s been very vicious to me, Rosie O’Donnell, I said very tough things to her, and I think everybody would agree that she deserves it and nobody feels sorry for her," Trump said during the first debate.