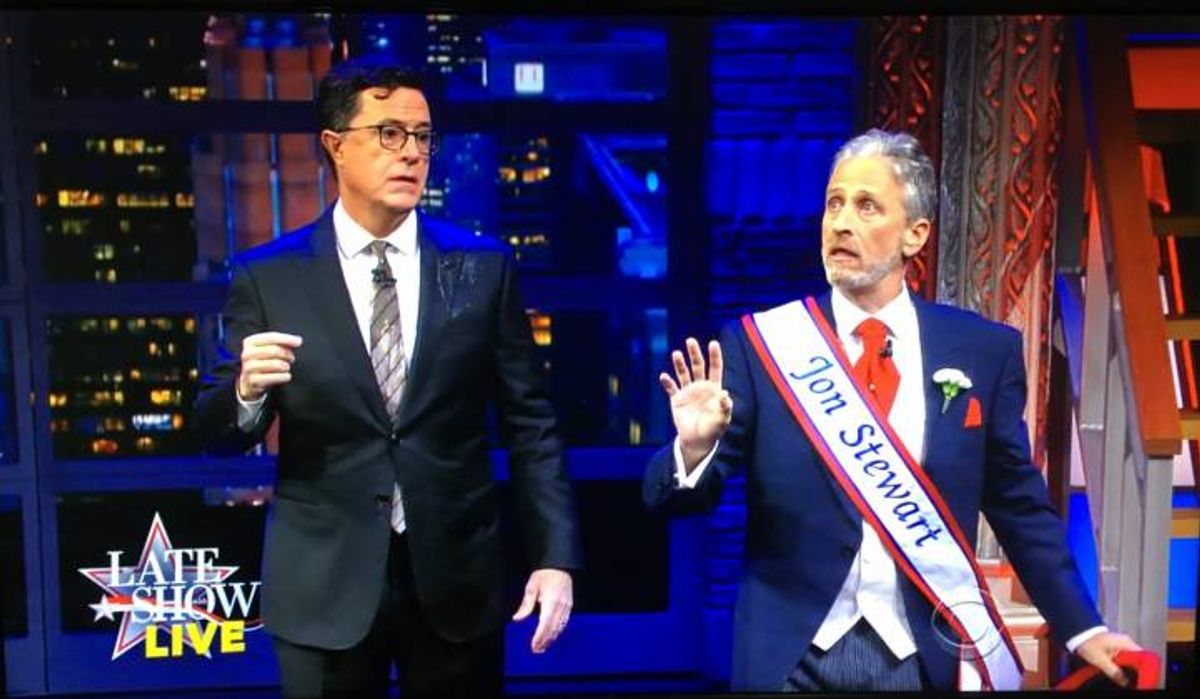 It's been a grueling slog, but the end is finally in sight. And as a gift to a weary nation embittered by the rise of a demagogue and set to elect the most unpopular nominee in modern history, the nation's top political satirists reunited to send off the 2016 election in epic fashion.

In an 11-minute musical sketch, Stephen Colbert's live election-eve "Late Show" special was interrupted by his former Comedy Central boss Jon Stewart, who had to deliver one final message to Donald Trump.

Stewart, who retired from hosting "The Daily Show” after 16  years in 2015, reprised the role of an out of touch and uninformed political satirist blown away by the ridiculous developments of the 2016 race that he first introduced during the Republican National Convention.

“Do you remember who’s running this year?” Colbert asks his former boss, who dressed in a red top hat and sash admits he's remained aloof of the process this cycle.

"What? Are you kidding me?!” Stewart says, doing a spit-take all over Colbert’s face after he's informed that Trump is the GOP presidential nominee. “That son of a — are you serious? That angry tax- and draft-dodging little orange groundhog is running for president?”

“He’s endorsed by David Duke!” Stewart sings of Trump. “His tiny hands might get a nuke!”

He continued with a rap-like diss of Trump: "He acts real tough, but he’s a wussy. He’ll probably fill the court with Gary Busey. And then he’ll grab your mother’s… kitty cat. Meow.”

Stewart and Colbert reunite again to conclude by encouraging people to vote Tuesday.