President Trump: A colossal failure for democracy and our terrifying new reality 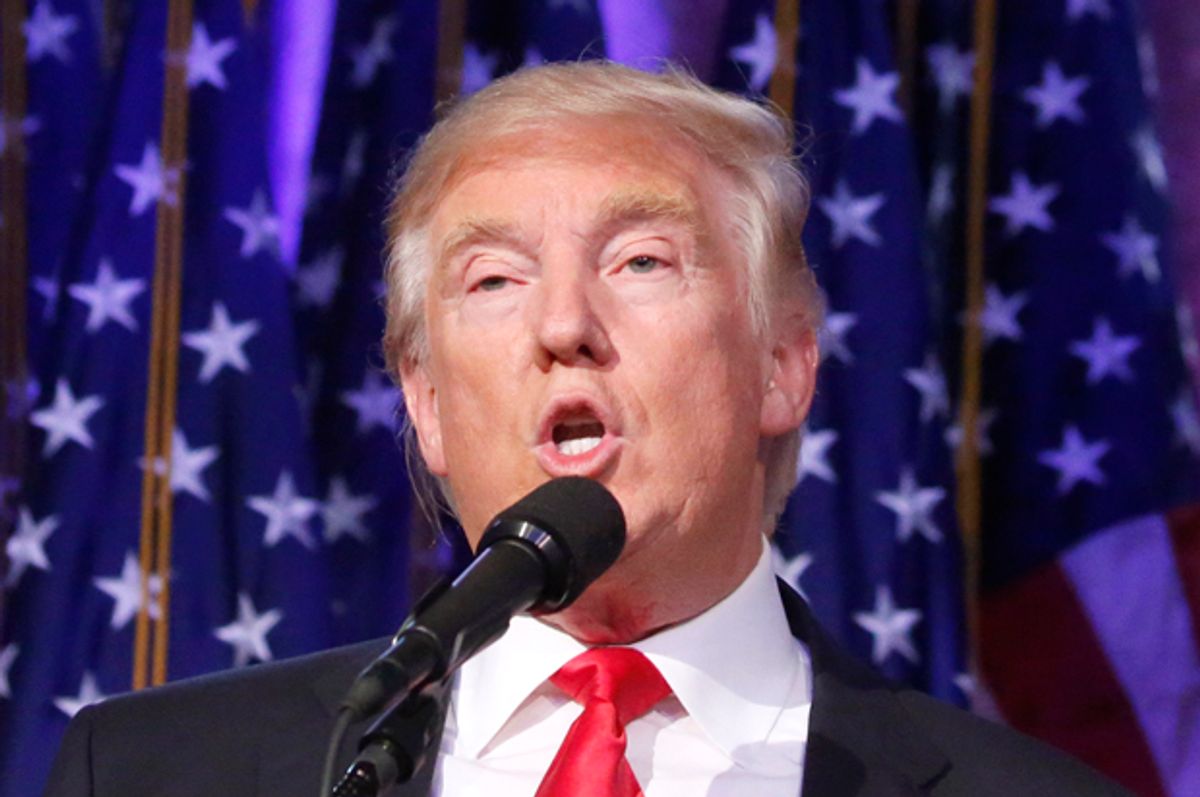 It’s impossible to overstate how colossal a fuckup this is. At every level, across both parties, the media, pollsters — all the democratic institutions that are supposed to prevent something like this from happening or at least warn us about it. Donald Trump, a Republican candidate who ran an openly racist campaign, who is as proud a misogynist as you’ll find anywhere, who is manifestly ignorant of public policy, who is brusquely authoritarian, who has little respect or understanding of democratic norms and who embodies every moral failing that’s supposed to disqualify a candidate from higher office, has apparently been elected as the next president of the United States.

The markets are collapsing, the globe is reeling, and nobody can quite explain what the hell happened. But here’s what this failure will mean: The climate, which is warming precipitously, is now guaranteed to continue along that trajectory toward global catastrophe. The millions of people who gained health coverage over the last half of a decade are now at acute risk of being thrown off their insurance plan and left to the unfeeling mercies of insurance underwriters.

Income inequality, already at dangerously high levels, will only grow worse as tax cuts for the rich and spending cuts for the poor are pushed through the Republican Congress. Unprecedented GOP obstructionism on Supreme Court nominees has been rewarded in the worst possible way. And the foreign policy of the United States will be run by a bona fide ignoramus.

The man elected to the most powerful office in the land has no idea what to do with it and no concept of its limitations. He attracts the worst people to him, sycophants and power-hungry strivers who will be placed in positions of authority and who will obey the boss’ diktat above anything else. Every democratic norm he gleefully shredded along the way is gone for good. Every thumb in the eye of transparency will now be official policy.

All that terrifies me.

But right now those things are not what I think about when I contemplate life under President Donald Trump. This will sound trite, but primarily I think about my two boys, a 2-year-old and a 4-month-old. I don’t have to explain this to them because neither would understand. But if I were to tell my 2-year-old what is happening, I’d do it in Spanish because both he and his brother have deep Mexican roots that my wife and I want them to embrace and be proud of. It destroys me to know that they, that we live in a country that seems to have chosen as its leader a person who made frenzied racial attacks on my family’s heritage the launch pad for his successful presidential run.

I think about the African-Americans, Muslims, Jews, and Latinos in this country who now face life in a country presided over by a candidate who embodies white nationalism and memorably couldn’t bring himself to disavow a former leader of the Ku Klux Klan. Children of undocumented immigrants who are U.S. citizens by birth have been told by their new president that they’ll be deported. Refugees from Syria who were relocated here to escape war and violence will have another target on their backs. These are the people who will feel the consequences of this failure most acutely.

I have one more thing to add: I am sorry.

In my capacity as a media figure, I too often treated Trump as a joke, a bumbling incompetent, someone who obviously could not be treated seriously as a legitimate candidate for the presidency. Now I can only think that I was too hidebound by conventional wisdom, too comfortably out of touch to see what was in front of me. I succumbed to the sideshow element of this awful race more times than I can be comfortable with. I own this failure, too.