The misogyny apocalypse: Turns out being white and male counts for more than intelligence, grace or decency

It was unimaginable that America would self-destruct rather than elect a female president. But that's what happened 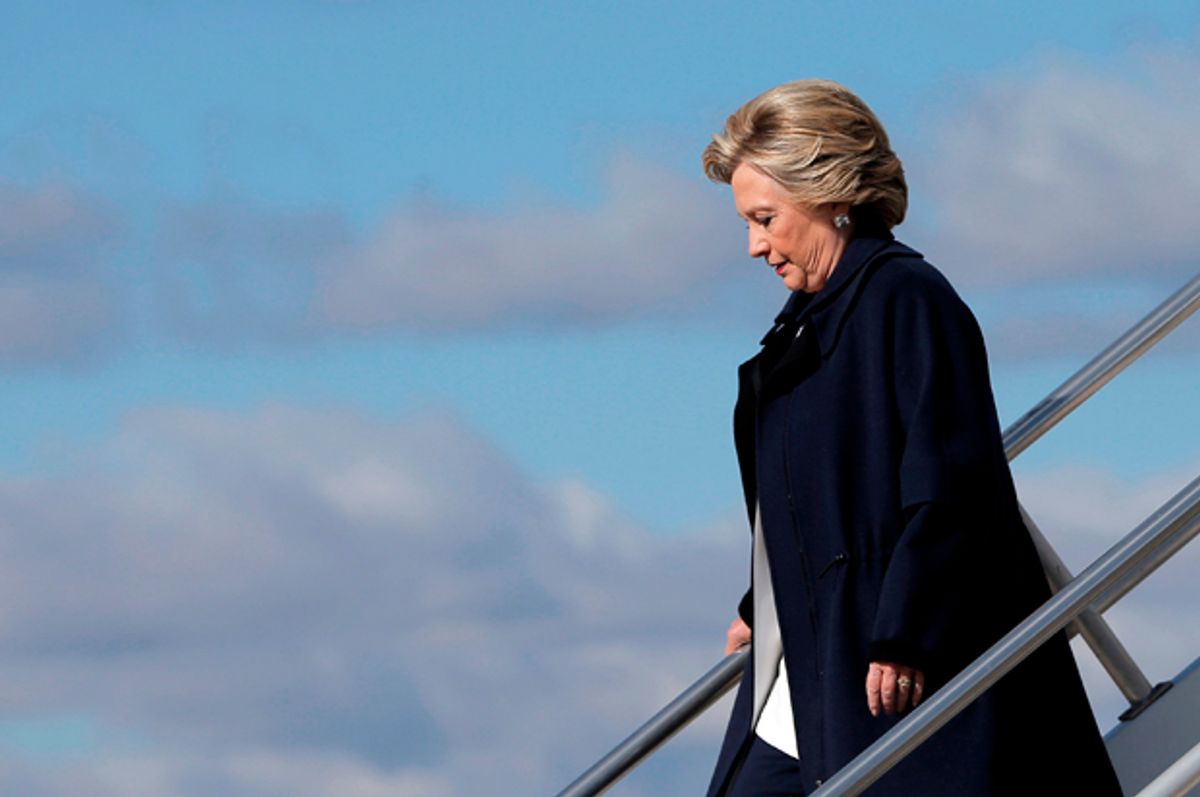 Facebook
Twitter
Reddit
Email
view in app
I just keep thinking about that CNN screenshot: Republican presidential nominee Donald Trump, standing next to his wife Melania while they voted on Tuesday morning, looking over at her with a face that strongly suggested he was making sure she voted in a way that she didn't have to hear about when they got home. Later in the day when it still seemed impossible that America was racist and sexist enough to vote away its security and its future, I tweeted it, thinking it was funny.

This picture is everything. pic.twitter.com/m9Blodj90f

No one should be surprised that it was men, especially white men, who handed Trump this election. It's been exhaustively established that the majority of white men in this country are consumed with resentment at being expected to treat women and racial minorities as equals, though of course some liberal journalists — usually white men themselves — kept valiantly trying to claim that it was "economic insecurity" that somehow drove the most prosperous group of Americans to kick angrily at those who objectively make less money and have less status than they do.

But many people hoped that women who typically vote Republican — enough of them, anyway — would see Mr. Grab Them by the Pussy as a wake-up call about how the men in their lives really feel about women and would, if only this once, quietly vote against hate and for their own dignity and that of their daughters.

To be clear, a substantial portion of that vote was sheer racism. Make no mistake, there are women in this country who don't care if Trump eschews the Bible and instead is sworn in with his hand on the pussy of an unwilling woman, so long as he does so while threatening to screw over Mexicans and Muslims. As the essays about benevolent sexism have warned, women can be just as vile and hateful as men.

But then I look back at that picture of the Trumps voting and think something else is going on.

It's not that men are looming over their wives, telling them to vote for the misogynist pig or else. It's more complicated than that.

It's more that the truth about Trump, and why men support him, is too ugly to look at directly. Rather than admit that the men in your life hate women, it's easier to rationalize: Trump's just joking around! Those feminists are oversensitive! Democrat Hillary Clinton really is a hateful shrew; it's not just that she's been demonized by the same misogynist forces that elevated Trump.

That's what makes that picture of Donald and Melania Trump so telling. Many of us believe — or fear — that huge swaths of women are in secret rebellion, that their outward submission belies a heart that believes that women are equal. But it's actually simpler for women to accede not just their outward behavior, but their hearts, to this sexist system.

It's even tempting, in many cases, to believe that if you join in with the misogyny, you'll be spared. Call other women sluts, and you'll look pure. Call them bitches and shrews, and you look more pleasant by comparison. Agree that there's just something wrong with Clinton's voice, and your voice will be judged more sonorous.

To some extent, it's even true. Plenty of men are swift and eager to show their approval to the woman who disapproves of other women. But that male approval is always provisional. Show the qualities that make Clinton so unpopular — ambition, dignity, spine — and that approval dissipates.

To be certain, many women — more all the time — choose dignity. Some have fled far from home and left behind quite a bit to get it.

When I first arrived at the Clinton watch party at the Javits Center in Manhattan on Tuesday night, the place was packed with those women and the men who support them. The air smelled like vindication. It took a century to get the vote and another century to get a woman within a stone's throw of the presidency. But on that night, people clearly felt, the country was ready to agree that women really are equal and deserve to be treated like leaders and thinkers instead of as a quiet servant class.

"She's just a phenomenal woman," Karryn Humphrey from Little Rock, Arkansas, told me as supporters waited cheerfully for the female president that they had yet to know would never come. "She represents all women across America."

Said Humphrey: "She represents such class and dignity," adding how excited she was for her young daughter to see this.

"It's part of history, obviously," added her fellow Little Rock resident, Dwayne Ford, who noted that seeing history was part of the reason he had made the trek to New York.

"I'm psyched," said Christina Dicerbo of the Brooklyn neighborhood of Crown Heights. "I've been a supporter since 2008."

Dicerbo added, "I love her," noting, "she's so accomplished, so smart. She's everything I wish I was. She's also so adorable, so funny. You watch her in videos and think, 'You're so adorable and so nice.'"

One of the great ironies of the whole ongoing email debacle is that the leaks showed that the Clinton that exists in the real world is the one the folks at her rally saw: kind, grandmotherly and smart as hell. On Samantha Bee's show "Full Frontal," actress Sarah Paulson did a dramatic reading of the emails to demonstrate this, lingering on Clinton's enthusiasm for women's rights initiatives and for watching "The Good Wife."

But the actual content of the emails mattered not one bit. The "emails" were a scandal not because of any facts uncovered but because they allowed people to paint Clinton as secretive and conniving.

We cannot, it turns out, square the notion that a woman can be both ambitious and good. Ambition continues to be seen as an unnatural quality in a woman, an indication that she must be a wicked witch casting spells to destroy the more submissive — and therefore worthy — young princesses. People believed there was something nefarious in the emails not because there was but because they needed to believe. Any woman who has risen so high must have darkness in her soul. If we cannot find it, we will invent it.

Throughout most of the election, I was as cheerful and hopeful as the folks in the Javits Center early on Tuesday night. Our country had elected a black president, I thought, so surely electing a woman was no stretch. Whenever my friends or colleagues would worry, I would say, often glibly, that I can't imagine who would vote for Barack Obama and then turn around and vote for Trump.

Sometimes, people would react to this statement by raising their eyebrows, ever so slightly. It was unspoken, but understood: There was always the possibility that many men — and the women who bought into this sexist bullshit — would find the possibility of a female president too threatening.

It didn't even need to be many — just enough to tip the scales. And that seems to be exactly what happened. Early returns show that third-party options, ones that allowed voters to avoid choosing either Trump or the threatening icon of female power that is Clinton, likely siphoned off enough Obama voters to make the difference. Voters under 45 voted for both Trump and Clinton in lower numbers than they did either Obama or Mitt Romney in 2012.

Maybe if it had been another woman, it wouldn't have been so bad. Clinton's main problem — the reason she couldn't coast into office on Obama's high approval ratings — is sexism. But she has been the target of sexist stereotyping for more than two decades now, which has piled up so much baggage around her that it's impossible for many people to see the real woman under all the wicked-witch stereotypes. Maybe another woman, one less well known to the public, would have been easier to like.

But then, of course, how would she have built up the experience to be competent enough to overcome ugly stereotypes about female inadequacy? Clinton only got this far by being smarter and better than every man in the room. A woman who doesn't have that doesn't have a chance.

And to an extent, Clinton's strategy did work. She still leads in the popular vote and may well end up winning it, something that will no doubt be quickly forgotten. The hopes of people who filed into the Javits Center, that finally our country would truly start valuing women's brains and experience as much as we value their ass firmness, were actually vindicated at the polls. It's only a trick of our Electoral College, designed to overvalue the votes of rural Americans over urban Americans, that shifted things in this preposterous and devastating direction.

But it sure as hell didn't feel like it at the rally. Most people weren't crying, but were shellshocked, trickling out of the hall in little clumps, sucked into a black hole of despair so deep that even tears seemed pointless.

The two candidates couldn't have been more starkly symbolic of the tensions here: One is an accomplished and kindhearted woman who works tirelessly. Another is a lazy blowhard who can barely be bothered to read but has an overblown sense of superiority by dint of being born white and male.

And why shouldn't he, when the world gives men like him whatever they want, no matter what kind of vile things they do?