White rage against the machine: President-elect Donald Trump is a historical shock — unless you study American history 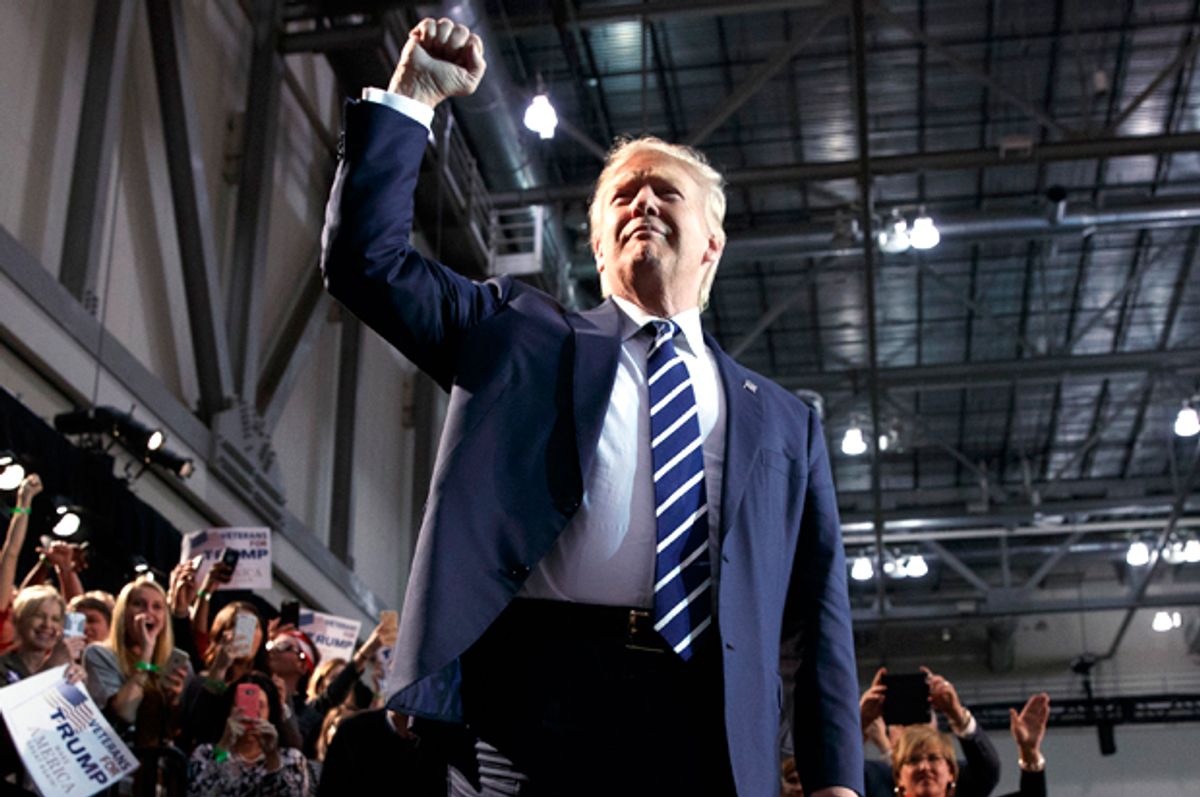 Republican Donald Trump has won the 2016 presidential election by defeating his Democratic rival, Hillary Clinton, though the exact margins of his electoral victory are still being calculated. To do this, Trump did what most of the professional pundits and so-called smart people thought was impossible: He defied polls to sweep Florida and nearly every battleground state.

To win the presidential election, Trump drew support from white men and created a new electoral map in the Midwest. Early exit polls indicate he also won over “Reagan Democrats” and independents.

What started as a right-wing populist brushfire at the beginning of the 2016 presidential season seems to have grown into an all out conflagration. Trump, the racist fascist is in control of the presidency; the House and Senate are also controlled by the Republican Party; America’s government is now unified with Trump, the child king, and his attendant the Christian theocrat Michael Pence as the public faces of America. This is a national embarrassment as America is now revealed to be a mockery before the world.

In a Salon piece earlier this week, I used the analogy of visiting the surgeon and being given a 30 percent chance of survival as the best way to understand the threat to Clinton (and American democracy) represented by Trump. Consider: If a doctor gives a person a 30 percent chance of survival he or she had best make sure the last will and testament is in proper order. It would seem that my worries were prescient and well-considered.

Like documentary filmmaker and activist Michael Moore, I sounded the alarm — for more than a year — about the real possibility of Trump's winning the White House for more than a year. Unfortunately, such warnings were not taken seriously and now we, the American people, are at one of the greatest nadirs in modern American political history.

How did this happen? I offer the following preliminary explanations:

Racism and sexism combined to defeat Clinton. This outcome is as much a backlash against President Barack Obama as it is against a woman being elected to the top office of the United States of America. America is a country divided against itself where political ideology and polarization are deeply intertwined with racial animus, sexism and hostility to the Other. If politics is a story of action and reaction, the age of Obama was punched in the face on Election Day by the age of Trump.

Authoritarianism has been on the rise in American over the last 10 years. This is especially true among Republicans and right-leaning independents.

Consumed by an obsession with “economic insecurity” among working-class white voters (a conclusion not borne out by public opinion and other data), the mainstream corporate news media refused to seriously consider the well-documented role of white racism and white racial resentment in motivating Republicans and others who flocked to Trump's banner.

The level of support for Trump was not captured by public opinion polls. Moreover, his “silent majority” of white voters may have — in a Republican Trump version of the Bradley effect — told pollsters that they were not voting at all or perhaps even voting for Clinton and then decided to actually support Trump.

Undecided voters, many of them “low information” individuals lacking a serious grasp of the issues, were drawn to Trump because of celebrity culture, white identity politics, a general sense of malaise and dissatisfaction about the country’s direction and the high negatives associated with Clinton.

The American corporate news media enabled Trump’s ascendance because his antics and unpredictability generated hundreds of millions of dollars in advertising revenue. The corporate news media was also wholly unprepared to deal with a presidential candidate who is a performance artist that channeled the sensibilities of professional wrestling and P. T. Barnum with an utter and total disregard for the truth.

The “elite” media, pundits and Washington insiders are also extremely disconnected from the angst and anger of red state America and those other parts of the country that feel left behind by cosmopolitanism and globalization and feel offended by conventions of human decency and respect such as “political correctness.”.

Trump’s racism, sexism, misogyny and bigotry are the Republican Party. Such behavior by Trump did little harm to him with his voters.

He is also anti-intellectual and proudly ignorant. These are attitudes and values encouraged and rewarded by the right-wing news-disinformation media and the political religion that is contemporary conservatism in America.

As I wrote earlier, the legendary comedian George Carlin was correct. As he famously said about America and politicians, the latter are reflections of the people. Shorter version: “Bullshit in, bullshit out." Trump is America.

Ultimately, the overwhelming power of white rage is the connective tissue tying together all of the various reasons that Trump defeated Clinton to win the White House. This is an old story in America, a nation founded on white (male) supremacy. Trump’s victory is in many ways a return to form that shows the age of Obama, the civil rights movement, and, yes, the women’s rights movements, were aberrations in the country’s history.

Racism and white privilege are threats to American democracy. This fact was proven true once again as tens of millions of white Americans were willing to elect an incompetent, crude, misogynist, ignorant sexual predator and fascist to the most powerful position in the world in order to “Make America Great Again." Again, Trump may not be the president the American people need but he most certainly is the one they deserve.