A Donald Trump presidency may provoke more bullying in schools 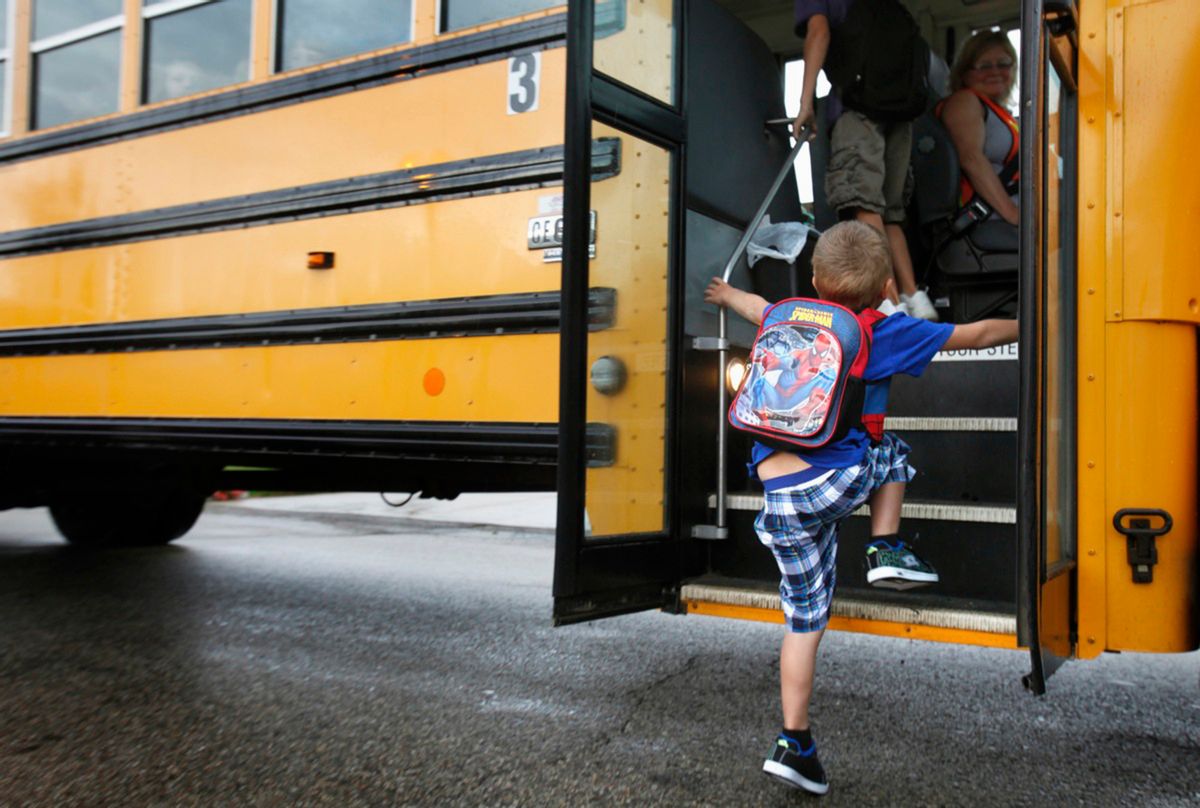 FILE - In this Sept. 4, 2012 file photo, a student at Indian Lake Elementary in Kalamazoo, Mich., boards a bus on the first day of school. Bullying is a serious public health problem, and should no longer be dismissed as merely a matter of kids being kids, a leading panel of experts warned Tuesday, May 10, 2016. Bullying behavior is seen as early as preschool and peaks during the middle school years, the researchers said. And the problem has morphed from the traditional bully-in-the-schoolyard scenario to newer forms of electronic aggression, such as cyberbullying on social media sites. (AP Photo/The Kalamazoo Gazette, Mark Bugnaski, File) (AP)
--

Donald Trump has won the presidency, but not before launching one of the most ugly and fractious campaigns in American history. As the 2016 election season now comes to a close, there are signs that it has left scars behind, particularly in the schools of the United States.

At the same time, the nonprofit Southern Poverty Law Center released survey data from the “Teaching Tolerance” project that gave details about the toxic effects Trump’s campaign rhetoric has had on teachers and students (and especially racial/ethnic minority students).

The SPLC report described immigrant students’ – especially Muslim and Latino immigrants – concerns about what might happen to them or their families after the election. Most respondents reported an increase in uncivil political discourse or anti-Muslim and anti-immigrant attitudes. Teachers reported reluctance to discuss the election in their classrooms due to fear of escalating this phenomenon.

I am a professor of special education and a behavioral science researcher currently involved in studying the effects of bullying prevention in schools. Social learning theory tells us that people learn from one another, via observation, imitation and modeling.

The most powerful models are those we consider to have higher status: older or more able children, parents, school adults and public figures such as celebrities and political candidates like Trump.

No matter what their experiences or background in growing up, most adults can remember at least one or two occasions during childhood where they were picked on, humiliated, intimidated, or perhaps even beaten up.

Bullying incidents most often occur in school, where there is limited adult supervision and monitoring. In the 2016 election campaign, teachers have reported that students felt “emboldened” to “use slurs, engage in name-calling and make inflammatory statements toward each other.”

In a short time period like an election cycle, we cannot scientifically prove a relationship between Donald Trump’s public behavior and a change in the way children behave. But it is important to consider what the effect of Trump’s rhetoric might be on teachers and schoolchildren.

An online survey conducted by The Southern Poverty Law Center’s Teaching Tolerance magazine found that teachers have been hesitant to teach about the election largely out of fear of promoting more student conflict around the topic. In Portland, Oregon, a principal imposed a “gag order” on teachers and prohibited them from talking about the election.

But even if the teachers did not discuss the issues in the classroom, students were talking among themselves or on social media. In Massachusetts, an elementary school social worker described what was happening to her eight-year-old son, who was adopted from Korea.

“He came home from school and recounted a conversation he’d had with his friends on the playground. Many … come from immigrant families and/or are black or brown. He told me they know that if Donald Trumpet [sic] was elected that we would have to move to another continent to be safe and that there would be a big war. He is very nervous about being sent away with my husband who is also Korean American.”

Is ‘Trump effect’ leading to bullying?

There are many theories about how bullying develops. A simple explanation is that of modeling, first researched and explained as Social Learning Theory by psychologist Albert Bandura.

This theory suggests that children imitate the words and behaviors they hear. “Attractive” role models (such as parents or others in authority such as political candidates) may have a stronger modeling effect.

When children watch television or other media and listen to their parents or others in authority talk about political candidates such as Trump and his statements, they learn to use the same language in their daily discourse. Trump’s own behaviors that children can see through the media (television, Twitter) can also serve as a model. We can’t prove this as a cause, but certainly there is substantial evidence from the aforementioned reports to suggest a strong relationship.

We know from new research that the earlier portrait of a young person who bullies as someone who is insecure and has low self-esteem is somewhat misleading. The latest research indicates that teen bullies – both boys and girls – tend to be confident, with high self-esteem and may even have elevated social status among their peers.

The point is that schools are diverse places. Children are routinely placed in classrooms, common areas, the bus, etc. with diverse students. Those students can become the targets of bullying and harassment based on their race/ethnicity, gender, disability or sexual orientation.

Even characteristics such as being smaller, overweight or wearing glasses can make a student a more vulnerable target. Trump’s seemingly endless – until now – misogynistic, racist, and “ableist” (anti-disability) statements could provide the model for children to use in schools and elsewhere.

In his acceptance speech, he distanced himself from the nastiness of the campaign and avoided any mention of mass deportation of Muslims, torture of terrorism suspects or the building of a giant wall on the southern border.

Requiring those who bully and harass to stop is of course complex and often difficult. But we can at least make sure our school personnel are supported to learn and practice evidence-based strategies to prevent and respond to this type of behavior.

For example, schools could do regular surveys to find out more about the environment. But, at times, such as the 2016 election campaign, even such surveys may not be enough as new forms of bullying emerge.

So, to check bullying both schools and families need to be actively involved in talking with children and modeling behavior that supports tolerance, respect and inclusion of all people. Families need to talk to their children so they can check them from bullying as well as being bullied.

Negative and toxic rhetoric will likely continue long after this election. But we need to work to ensure that our children inherit a world that is safe, civil and respectful.