Boomers in revolt: Was Trump's shocking win an act of generational warfare?

Once the baby boomers rebelled against their parents. Now they're trolling the grandkids by electing Donald Trump 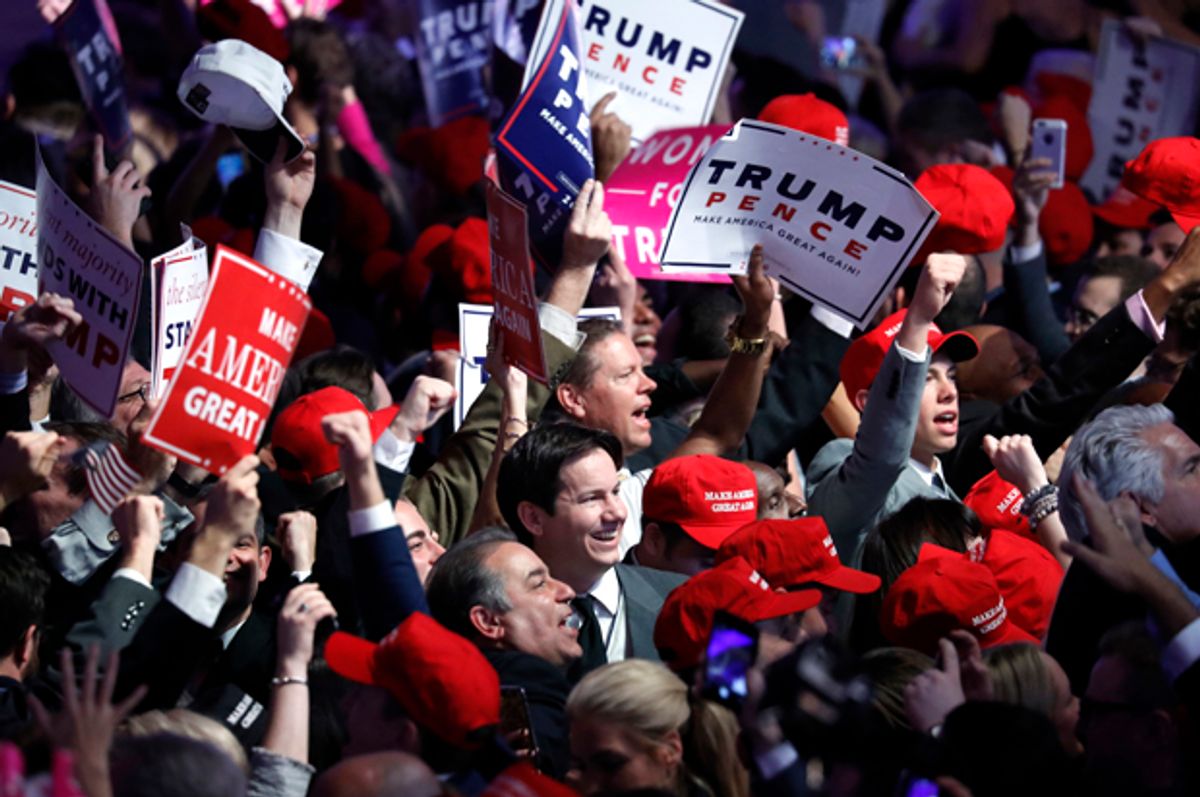 In their youth, the millions of people born during the baby boom generation rebelled against their parents. Now as they head into retirement, they're telling off the grandkids.

There was a lot of press attention on race and sex during the battle between Republican Donald Trump and Democcrat Hillary Clinton for the White House. The big story just might be about age and income inequality.

Defined by the Pew Research Center as adults currently between 51 and 69 years of age, the group of people born after World War II is no longer the largest generation in America. According to exit polls, however, Trump's success among the boomers is what gave him the White House.

There was a lot of discussion about how the rookie presidential candidate was strongly opposed by younger adults. Indeed, that proved to be true.

If the survey conducted by a consortium of news organizations is to be believed, voters younger than age 45 picked Clinton over Trump, 52 percent to 40 percent. Their numbers simply were not large enough to overwhelm the preferences of those 45 and older, who went for Trump 53 percent to 44 percent.

The same dynamic also powered Trump as he dispatched one Republican opponent after another before becoming the party nominee. In a Public Opinion Strategies study that sliced up the GOP primary electorate into several different demographic groups, just 32 percent of those between 17 and 29 years of age went for the billionaire real estate developer.

The boomers kept up their Trump enthusiasm in the general election as well, comprising a greater share of voters than they did in 2012.  According to the media exit polls, people 45 to 64 comprised 38 percent of the electorate four years ago. This time around, they were 40 percent.

They also backed Trump at a greater percentage than they did the previous Republican nominee, Mitt Romney. The former Massachusetts governor received 51 percent of boomers' votes in 2012, whereas the former reality TV star got a 53 percent share this year.

The population distribution of the baby boom generation also helped Trump. It looks as if he will lose the popular vote (although the final tallies are still weeks away) but his Electoral College totals are clear. As it turns out, the states where boomers comprise more than 25 percent of the population have 302 electoral votes, Trump is expected to win 306.

In the various swing states that frequently feature close contests between the two major parties and also have large boomer populations, Trump won 94 of the 112 electoral votes available. Clinton won New Hampshire, Virginia and three of Maine's four electoral votes. Trump appears to have won one vote in Maine and all the votes in Pennsylvania, Michigan, Ohio, Wisconsin, Florida and Iowa.

Trump also seems to have earned more than a few crossover votes from people who had supported President Barack Obama in the past. In 2012, Romney received 7 percent of the vote from self-identified Democrats. In 2016, Trump received 9 percent.

Economic uncertainty seemed to drive a lot of Trump supporters. According to another exit poll commissioned by Politico, Trump won the votes of people concerned about jobs and the economy.

In a speech apparently delivered last year at a private campaign fund-raiser (the transcript was provided by WikiLeaks), former president Bill Clinton seemingly saw some of the anger and frustration that appears to have motivated many of these former Democrat-voting white boomers to turn out for Trump:

We have incredible debates all over America that shouldn’t exist between people in different racial groups because they don’t trust law enforcement anymore.

And in the middle of all this we learned, breathtakingly, that middle-aged, non-college-educated white Americans’ life expectancy is going down and is now lower than Hispanics, even though [Hispanics] make less money. And the gap between African-Americans and whites is closing, but unfortunately not because the death rate among African-Americans is dropping but because the death rate among white Americans is rising.

Why? Because they don’t have anything to look forward to when they get up in the morning. Because their lives are sort of stuck in neutral.

The boomer vote definitely helped Trump, but it's also starting to appear that Hillary Clinton's poor performance among younger voters also damaged her during the general election.

To some degree, Democrats ought to have seen this coming. During the primaries, younger voters overwhelmingly preferred Clinton's rival Bernie Sanders. According to a study from the Center for Information and Research on Civic Learning and Engagement at Tufts University, voters younger than 30 cast more than 2 million ballots for the Vermont senator compared with just 766,000 for Clinton.

The general election votes haven't all been tallied, so it could be premature to say this — many people to this day incorrectly believe that Mitt Romney received fewer votes than John McCain — but it's starting to appear that Donald Trump won partly because Bernie Sanders supporters didn't want to vote for Clinton.

Much of that apparent reluctance may have stemmed from Clinton's long career in politics and her position at the very top of the Democratic establishment. As Thomas Frank has noted, her background was probably not a good fit for America's current politics.

As the author of the best-selling "What's the Matter with Kansas?" and a recent tome warning Democrats away from racial identity politics and toward progressive economics, Frank wrote a blistering postmortem that is sure to be bookmarked by many a Democrat wondering what went wrong:

Why, oh why, did it have to be Hillary Clinton? Yes, she has an impressive resume; yes, she worked hard on the campaign trail. But she was exactly the wrong candidate for this angry, populist moment. An insider when the country was screaming for an outsider. A technocrat who offered fine-tuning when the country wanted to take a sledgehammer to the machine.

She was the Democratic candidate because it was her turn and because a Clinton victory would have moved every Democrat in Washington up a notch. Whether or not she would win was always a secondary matter, something that was taken for granted. Had winning been the party’s number one concern, several more suitable candidates were ready to go. There was Joe Biden, with his powerful plainspoken style, and there was Bernie Sanders, an inspiring and largely scandal-free figure. Each of them would probably have beaten Trump, but neither of them would really have served the interests of the party insiders.

Frank's criticisms and Bill Clinton's remarks on economic stagnation recall those of filmmaker Michael Moore, who has warned Democrats for the past year that Trump was going to win the election.

“I know a lot of people in Michigan that are planning to vote for Trump, and they don’t necessarily agree with him,” the left-leaning documentarian said at a public event in late October.

“Trump’s election is going to be the biggest ‘fuck you’ ever recorded in human history — and it will feel good,” Moore argued, adding later in the speech that a protest vote for Trump would do nothing to solve the problems his supporters see in America.

The exit question for Democrats following Clinton's stunning defeat is whether the party hierarchy will change and can adapt to meet the needs its core voters didn't see being fulfilled.