How the media made this monster, normalizing Donald Trump and demonizing Hillary Clinton, and it's not over

Obsessive coverage of the BS "email scandal" may have tipped a tight race. Now Trump "pivots" to the White House 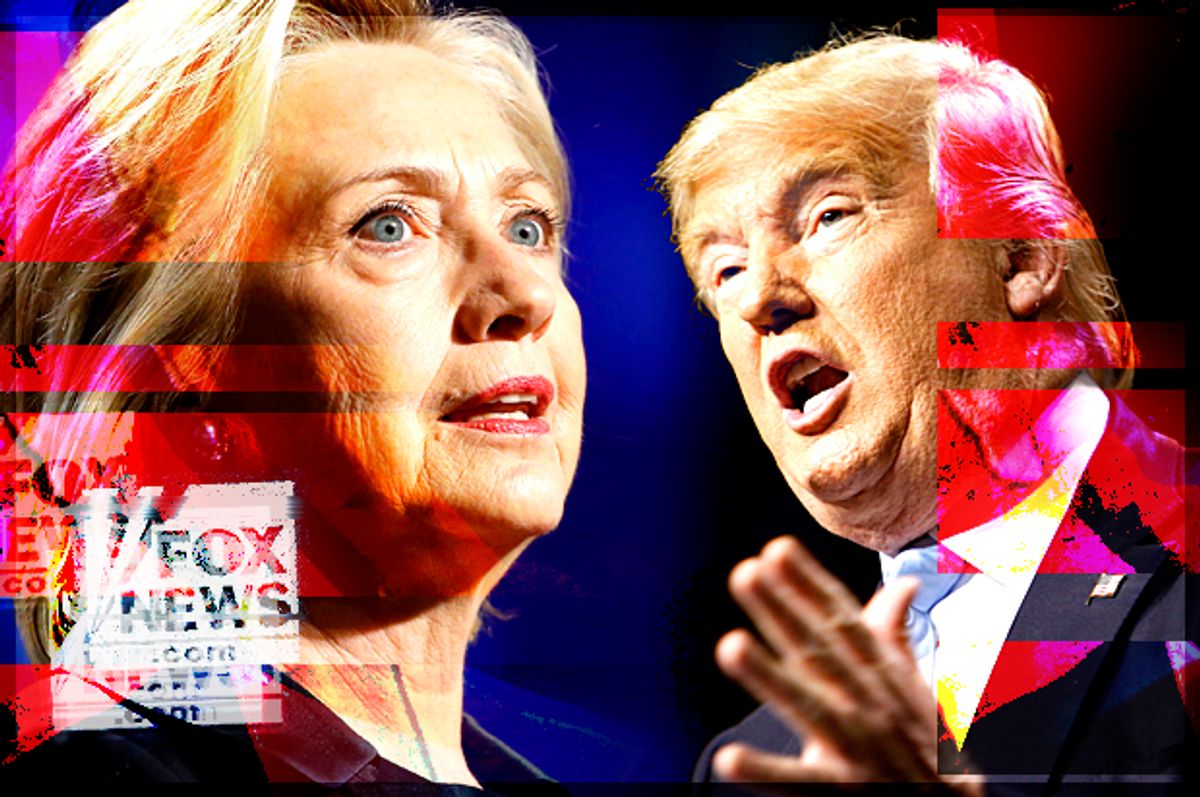 Last spring when Republican Donald Trump and Democrat Hillary Clinton were sewing up their parties' respective nominations, I wrote about a phenomenon that I could see was going to be a problem going forward: media outlets' need for "balance" that made them normalize Trump and demonize Clinton. The contours of the coming general election were starting to form and what I saw wasn't healthy. Over time it became downright toxic and the poison still infects our politics now that the presidential election has been decided.

Throughout the primaries Clinton's opponent, Bernie Sanders, had declined to attack her about her "damn emails" and he was right to do so. The "email scandal" involves a spurious charge that by having a private server Clinton was guilty of a federal crime, which is ridiculous. That belief spawned the execrable chants at Trump rallies of "lock her up" and "Hillary for Prison" and this became Trump's primary attack against her. It was a very serious charge fraught with baggage that went back more than 20 years when the press demonized her as a "congenital liar" and a criminal (neither of which were true then either.)

Clinton, meanwhile, was trying to hit a moving target, a man who is thoroughly immoral and corrupt in every way, crudely insulting everyone except his loyal followers until it all seemed to merge into a cartoon caricature that his voters didn't take seriously. His "policy" pronouncements, ranging from calling for building a wall to banning Muslims and from torturing terrorist suspects to killing their families, were cheered on wildly by his fans and reported dutifully in the press as if he were a normal politician offering up his views on a highway bill. His myriad business failures were discussed but never put into the context of politics. His plans to keep his businesses going after the election weren't questioned. His mistreatment of women was covered extensively and then dropped.

Month after month, Clinton was hammered in the press over the arcane email story with new "tranches" being continuously released under the Freedom of Information Act. Then WikiLeaks began dumping the hacked private correspondence from her staff, each new group creating headlines but revealing nothing criminal or even unethical. It was a relentless drumbeat that ceased to have any specific meaning early on and instead became a symbol of Clinton's dishonesty, untrustworthiness and finally her criminality.

A recent Gallup poll asked people what were they were hearing about the two candidates: 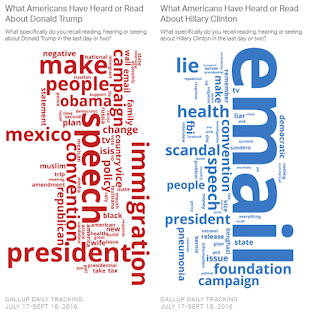 As you can see above, people had heard a whole lot about Clinton's emails and it certainly wasn't in a positive context. Trump, on the other hand, was associated with a bunch of different ideas that didn't add up to much.

This was not because media outlets didn't report all the negative Trump stories. It's that they didn't break through in any cohesive way, while Clinton's were highly focused on one issue that served as a proxy for her allegedly dishonest character. When the FBI's director, James Comey, dropped his email bombshell in the last week of the campaign the news media went wall-to-wall on the story, despite the fact that it was no more of a criminal matter than it had been before. The New York Times ran screaming headlines on the front page two days in a row.

And it made a difference. As Matthew Yglesias concludes in an interesting article for Vox:

Analysis of Trump’s victory will naturally tend to focus on the broad structural forces that drove his rise. But elections are close-run things. The difference between a narrow win in Florida and a narrow loss in Florida is just a few thousand votes. The typical Trump supporter was drawn to him out of either baseline partisanship or attraction to the peculiarities of his message. But the marginal Trump supporter is the reason he won. And that supporter was very likely influenced by the overwhelming media focus on the email matter.

Clinton has almost certainly won the popular vote in this year's election, but she lost the Electoral College vote by very small margins in a number of states. There is little doubt that the email story contributed to Hillary Clinton's defeat and, as Yglesias says, it "is and always was overhyped bullshit."

One might have hoped that the fact that this absurd pursuit of a nonstory may have changed the course of history (and not in a good way) might lead media professionals to do some soul-searching about how they covered an election between a mainstream qualified woman and an unfit confidence man. But if the first 24 hours of coverage are any example, it's unlikely. For example, Maeve Reston of CNN tweeted this:

There is a totally inaccurate narrative out there that Trump didn't get vetted by the press or got special treatment. That's just wrong.

It's not that they didn't vet Trump. It's that they vetted him badly, in a way that people couldn't understand. And where CNN and the other networks are concerned, the hours and hours of free airtime, the bending of the rules and the normalizing of his outrageous campaign rhetoric, which the network honchos admitted was great for ratings, certainly adds up to special treatment.

But if we thought media outlets had "normalized" Trump before, it was nothing compared with what's happening now. Media representatives assume that Donald Trump has "pivoted," which is shorthand for their ongoing assumption that at some point Trump would drop the cretinous imbecile act he uses to entertain the rubes and morph into the intelligent, thoughtful businessman he really is. This anticipation of the pivot was a regular feature of the campaign which obviously never actually happened — or ever will. Trump is Trump.

Nonetheless, the usual panels have been convened and analysis of the election has gelled into an anodyne "change" message in which "the people" are just tired of the status quo and voted out the party in power. The discussion is all about how President-elect Trump and the Democrats will have to reach out and bring the nation together. The odious campaign that he just ran to get to the White House and the ugliness he exposed in our body politic have simply been disappeared. Trump has been given a clean slate. It's like it never happened.

The good news is that until the presumptive attorney general Rudy Giuliani brings Trump's promised indictment against Clinton, we won't have to hear about the emails. The only time they came up yesterday was when someone actually asked if President Barack Obama planned to give her a presidential pardon before he leaves office. She's committed no crime and yet may face some sort of show trial to satisfy the slavering Trump voters still eager to see her punished, so the White House was noncommittal.

The media's normalization of Trump is complete. The demonization of Clinton continues.