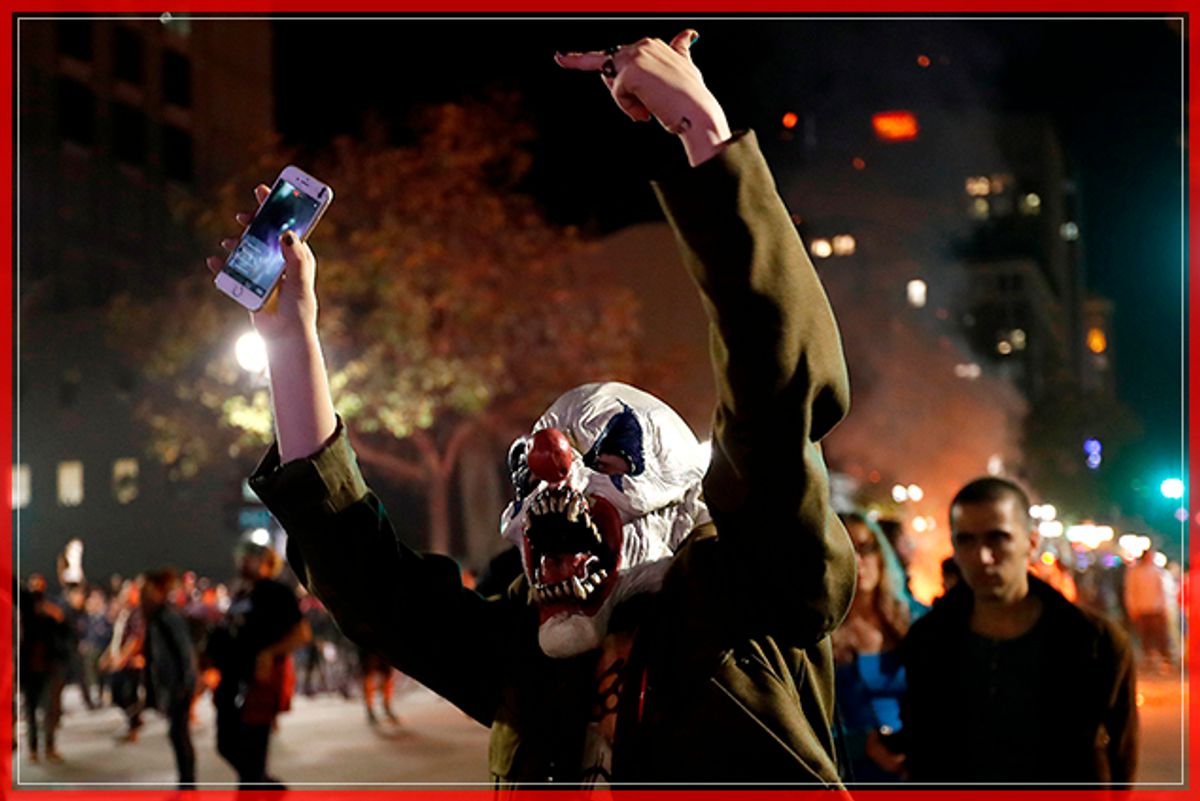 A masked demonstrator gestures toward a police line during a demonstration in Oakland, California, U.S. following the election of Donald Trump as President of the United States November 9, 2016. REUTERS/Stephen Lam - RTX2SXVM (Reuters)
-- In the heated battle for Mosul, Iraq's second-largest city, ISIS has carried out what the United Nations has dubbed a "scorched earth policy," setting oil wells ablaze as it flees. The U.N. Environment Program said the pollution has only further added to the “complexity and danger” of the humanitarian crisis the battle for Mosul has created. “This is sadly just the latest episode in what has been the wholesale destruction of Iraq’s environment over several decades,” UN Environment Program executive director Erik Solheim warned. Iraqi civilians have already paid an enormous toll in decades of U.S.-fueled wars. The environmental destruction is yet another horrific tragedy. The photos pouring in from around the country of anti-Trump protests should be heartening, but, and perhaps this is just because I'm looking at this through a cloud of despair, I find myself grumpy and skeptical. How many of these people hitting the streets refused to vote for Hillary Clinton? How many of them wrapped up their sexism and mommy issues in a cloak of "socialism"? How many of the people praising her now for her grace in loss were demonizing her as some email witch/ambition monster when it looked like she was winning?

Maybe I'm wrong and all those people hitting the streets actually bothered to learn she had the most progressive platform in American history before Tuesday. Maybe they voted for her with a song in their heart. But somehow I don't think so. In a week when the GOP elephant shocked the world, rising from a prone position to to the heights of power, it's good to see one of the actual animals is trying to do the same with some much-needed assistance. This giant beast had fractured its leg while being chased by villagers near Bangalore, India, and now, with the help of a crane, is being taken to a rehabilitation center. There this endangered Asian elephant will begin to heal before being returned to the wild, much as we thought the Republican would be licking its wounds right now.