Americans marched out and took to the streets Wednesday night 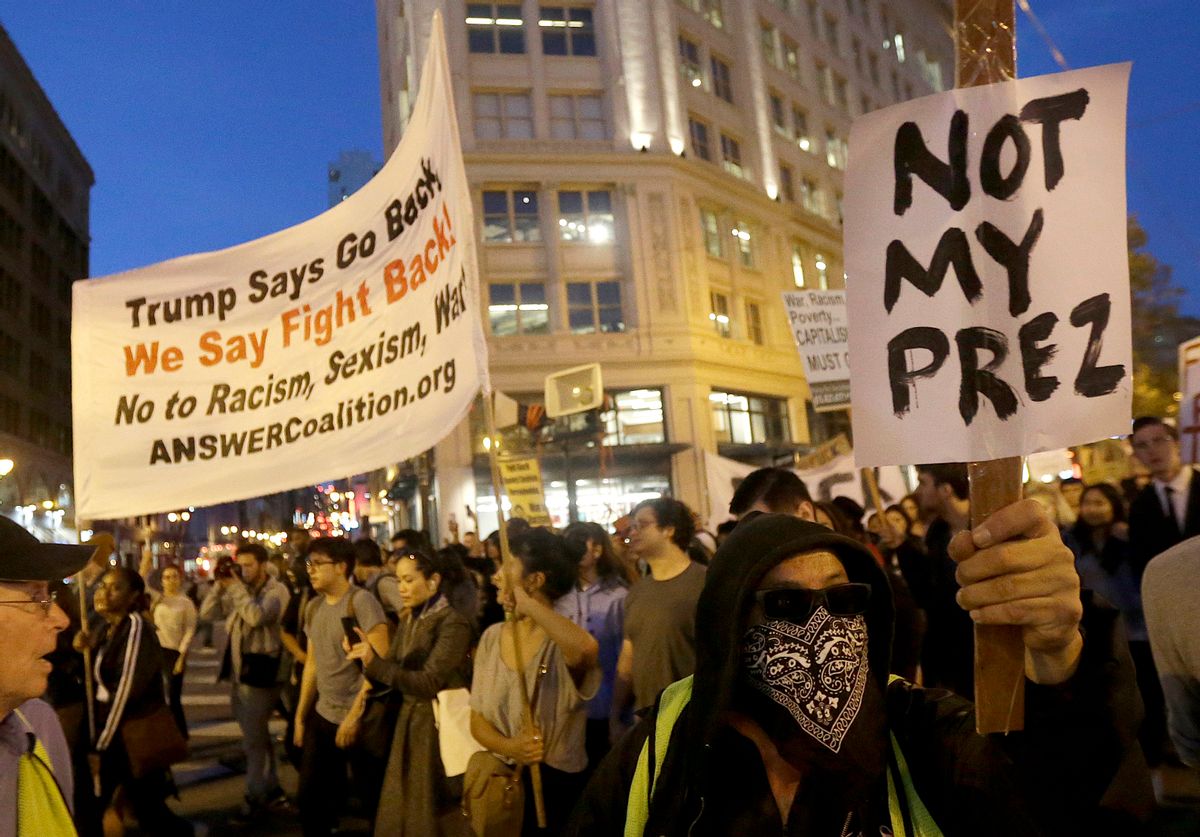 Donald Trump's election on Tuesday night is inspiring a wave of protests around the country from Americans — the majority of whom voted for Hillary Clinton — who are angry about the future of the country.

Flames lit up the night sky in California cities Wednesday as thousands of protesters burned a giant papier-mache Trump head in Los Angeles and started fires in Oakland intersections.

People have taken to the streets to protest Trump's victory in the election. pic.twitter.com/v2fKVthY9v

Los Angeles demonstrators also beat a Trump piñata and sprayed the Los Angeles Times building and news vans with anti-Trump profanity. One protester outside the Los Angeles City Hall had a sign with a simple message: "This is very bad."

Late in the evening several hundred people blocked one of the city's busiest freeways, U.S. 101, between downtown and Hollywood.

In Chicago, where thousands had recently poured into the streets to celebrate the Chicago Cubs' first World Series victory in more than a century, several thousand people marched through the Loop. They gathered outside Trump Tower, chanting, "Not my president!"

A similar protest in Manhattan drew about 1,000 people. Outside Trump Tower on Fifth Avenue in midtown, police installed barricades to keep the demonstrators at bay.

Thousands of people line the streets of American cities to protest against their newly Elected President, Donald Trump. #TrumpProtest pic.twitter.com/eAI21A8LnJ

Hundreds of protesters gathered near Philadelphia's City Hall despite chilly, wet weather. Participants — who included both supporters of Democratic nominee Hillary Clinton and independent Vermont Sen. Bernie Sanders, who lost to Clinton in the primary — expressed anger at both Republicans and Democrats over the election's outcome.

In Boston, thousands of anti-Trump protesters streamed through downtown, chanting, "Trump's a racist" and carrying signs that said "Impeach Trump" and "Abolish Electoral College." Clinton appears to have won the popular vote, despite losing the Electoral College count that decides the presidential race. The protesters gathered on the Boston Common before marching toward the Massachusetts State House, with beefed-up security there including extra police officers.

Hundreds are now gathered on the Boston Common and many more are streaming in to protest Donald Trump. pic.twitter.com/KZTjPPyXvW — Zeninjor Enwemeka (@Zeninjor) Nov. 10, 2016

Another group stood outside the White House. They held candles, listened to speeches and sang songs.

Others posted images from a night of protest from Seattle and other Californian locations:

THIS JUST IN: Students walkout of Venice High School in protest of President-Elect Donald Trump pic.twitter.com/a2PFuHCM9s

This story featured reporting from The Associated Press