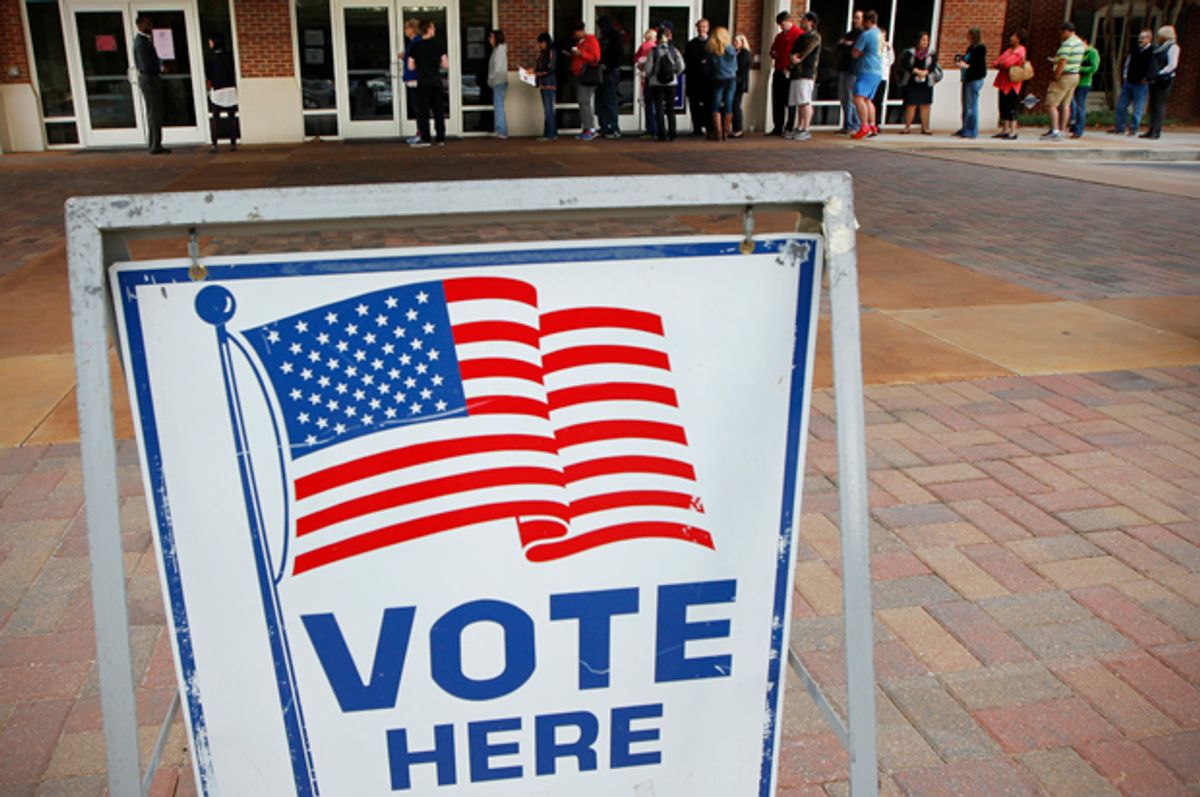 Black turnout was down in the 2016 election — but not for the reason you might think.

Among early voting results, fewer African-Americans than expected turned to vote for Democratic presidential nominee Hillary Clinton in battleground states like North Carolina and Florida. While black voters accounted for 25 percent of all early ballots cast in the Sunshine State in 2012, that number dropped to just 16 percent on the eve of the 2016 election, as Politico reported.

Amid data showing an 8.5 percent drop in blacks' early voting in North Carolina, the state’s GOP sent out a press release arguing that this showed a lack of enthusiasm for Clinton’s campaign among people of color. Even The New York Times argued as much last month.

This would seem to point to the reason why Clinton, once considered a heavy favorite, was defeated in an upset victory by Republican nominee Donald Trump in Tuesday’s election. But it was always unlikely that black voters were going to show up in the record numbers that drove Barack Obama to historic wins in 2008 and 2012, when he won a respective 95 percent and 93 percent of the black vote.

The support for former secretary of state Clinton among nonwhite Americans remained, however, sky-high throughout the race.

Seventy-one percent of Latino voters supported Clinton over Trump, which is on par with Obama’s 2012 support, and she was favored among Latinos by a 30-point margin in Florida. Meanwhile, August polling averages from FiveThirtyEight showed that Clinton had support from 86 percent of likely black voters — with Trump all the way in fourth place behind Libertarian nominee Gary Johnson and Green Party candidate Jill Stein. Recent reports of the Trump's bragging about his ability to sexually assault women in a leaked "Access Hollywood" tape are unlikely to have earned him many converts in communities of color.

The low turnout for Clinton had little to do with her black support and everything to do with the effective campaign of voter suppression run by Republicans, one that has decimated accessible options for people of color. This election illustrates the importance of alternatives to the current voting system, which continues to actively disenfranchise marginalized populations subject to numerous barriers to entry. It’s time to update the ballot box to make sure everyone’s voice is being heard.

Voting in the U.S. isn’t equal for all groups. Black voters, who are often concentrated heavily in inner-city areas, are forced to endure the nation’s longest lines, ones that may discourage them from voting altogether. A study from the Joint Center for Political and Economic Studies showed that black voters wait twice as long as white people to cast a ballot, with the longest wait times being in South Carolina, Florida and Maryland. Harvard researcher Stephen Pettigrew found that African-Americans were six times more likely than members of demographic groups to spend more than an hour in line in order to vote.

Part of the problem is the resources allotted to polling places in predominantly black communities. Those districts have fewer poll workers to assist voters and guide them through the process and have fewer voting machines on hand to process voters in a timely manner.

The experience that people have when voting has a huge impact on how likely they are to vote in the next election. While more affluent voters might have the ability to take time off work to spend in queues, lower-income people and urban minorities often don't have those same luxuries, meaning that the time spent at the polls costs them money they can’t afford to lose. The Joint Center for Political and Economic Studies survey found that 730,000 Americans found the lines in 2008 to be so excessive that they didn’t show up again four years later.

Long lines aren’t the only issue related to accessibility for voters. Following the 2012 election, the U.S. Census polled Americans who didn’t vote. The No. 1 reason that low-income voters said they stayed away from the polling place (for 20.1 percent of respondents) was that a disability or illness prevented them from voting. Other popular answers included “transportation problems” (9.4 percent), “registration problems” (5.6 percent) and an “inconvenient polling place” (2.3 percent).

Rather than making voting easier for minorities and low-income people, Republicans have engaged in a “Don’t Get Out the Vote” campaign designed to keep these populations from the voting booth. Given the low rates of black voting in states viewed as crucial to Clinton’s success, it appears to be working.

This action was enabled by the Supreme Court’s 2013 decision to nullify Section 5, related to preclearance, in the Voting Rights Act of 1965. That portion of the law, passed under the President Lyndon Johnson administration to prevent voter suppression on the basis of race, requires that states with a history of such practices gain approval from U.S. Department of Justice before making any changes to voting regulations. The absence of that federal oversight has allowed numerous states to restrict early voting hours, which is aimed at targeting voting among people of color. Black voters are more likely to cast ballots in the early morning than any other group.

A report from the Leadership Conference Education Fund found that there will be 868 fewer polling places in states that had previously been covered by the law. Of the counties surveyed in Arizona, every single one had restricted voting access. Texas and Alabama also decimated the availability of polling places: A respective 53 percent and 67 percent of counties had fewer places to vote than they did during the previous election.

Widespread voter suppression is likely to become a staple of elections as the U.S. populace becomes increasingly less white. In 2012, 72 percent of voters were Caucasian, down from 81 percent in 2000. This will remain a demographic struggle for Republicans when it comes to winning the Electoral College vote. Although states like Georgia, New Mexico, and Arizona were once reliably red, that’s no longer the case — mostly due to their large black and Latino populations. In New Mexico, where 13.2 percent of the population is Latino, Clinton had consistently led Trump by 10 points in polls throughout the election. Georgia and Arizona have also become competitive, with Clinton leading at various times during the election.

If Republicans hope to keep winning elections, it’s likely that they will continue to attempt to keep people from voting. If Democrats hope to combat that strategy, they should advocate that voters have more ways to cast ballots.

One method that many countries, including Finland, Australia, Norway and Canada, have experimented with is online voting. Estonia, which has a population of just 1.3 million, shifted to digital elections in 2005. Arnprior, Ontario — which is located 40 miles from the Canadian capital of Ottawa — even allowed voters to cast ballots “American Idol”-style in a 2010 mayoral race, accepting votes through call-ins.

This would particularly impact the ability of Democratic politicians to reach the coveted youth vote; as Vocativ reported, about half of millennials in one poll claimed that expanded digital options would make them more likely to participate in elections. In the U.S., 26 states already have some form of online voting in place, largely courtesy of the Uniformed and Overseas Citizens Absentee Voting Act, which allows members of the military and expats to vote from abroad. It’s estimated that 1 million votes are collected every year through online balloting.

The problem with online voting is that while the demand is high to bring voting into the digital age, the technology hasn’t caught up. Nearly every single country where online voting has been implemented has experienced errors in the process. In 2013, Estonia asked hackers to crack its voting database to see if the infrastructure was vulnerable to threats. Researchers had such little trouble getting into the system and tinkering with the voting results that their team concluded that online voting should be disbanded entirely. That hasn’t come to fruition. A beta system in Washington D.C. proved just as permeable, with hackers infiltrating the system in 48 hours.

During a White House race where Russian hackers reportedly attempted to influence the election, the question of “rigged elections” has been a constant topic of discussion. Online voting may be a solution for the future when states are better able to fend off infiltration from foreign governments, but we need more investment and more robust infrastructure from a stodgily technophobic Washington.

One solution states would do well to embrace in the meantime is expanding the use of mail-in ballots. Three states —Colorado, Washington, and Oregon — conduct all of their polling through mail, with appropriate paperwork automatically shipped to the addresses of registered voters. In 2012, those three states had some of the highest turnout in the nation, ranking among the top 15 of U.S. states. Although Minnesota led the U.S. with a 76 percent turnout rate, Colorado wasn’t too far behind; 69.9 percent of eligible voters cast a ballot in the 2012 race. The national average was 57.5 percent.

While there’s no single answer to America’s ballot box woes, Democrats need to seek meaningful safeguards to the voting rights of millions of vulnerable minorities. We need to make voting easy, accessible and fair. Following the worst presidential election in U.S. history, the future of the country itself may depend upon it.