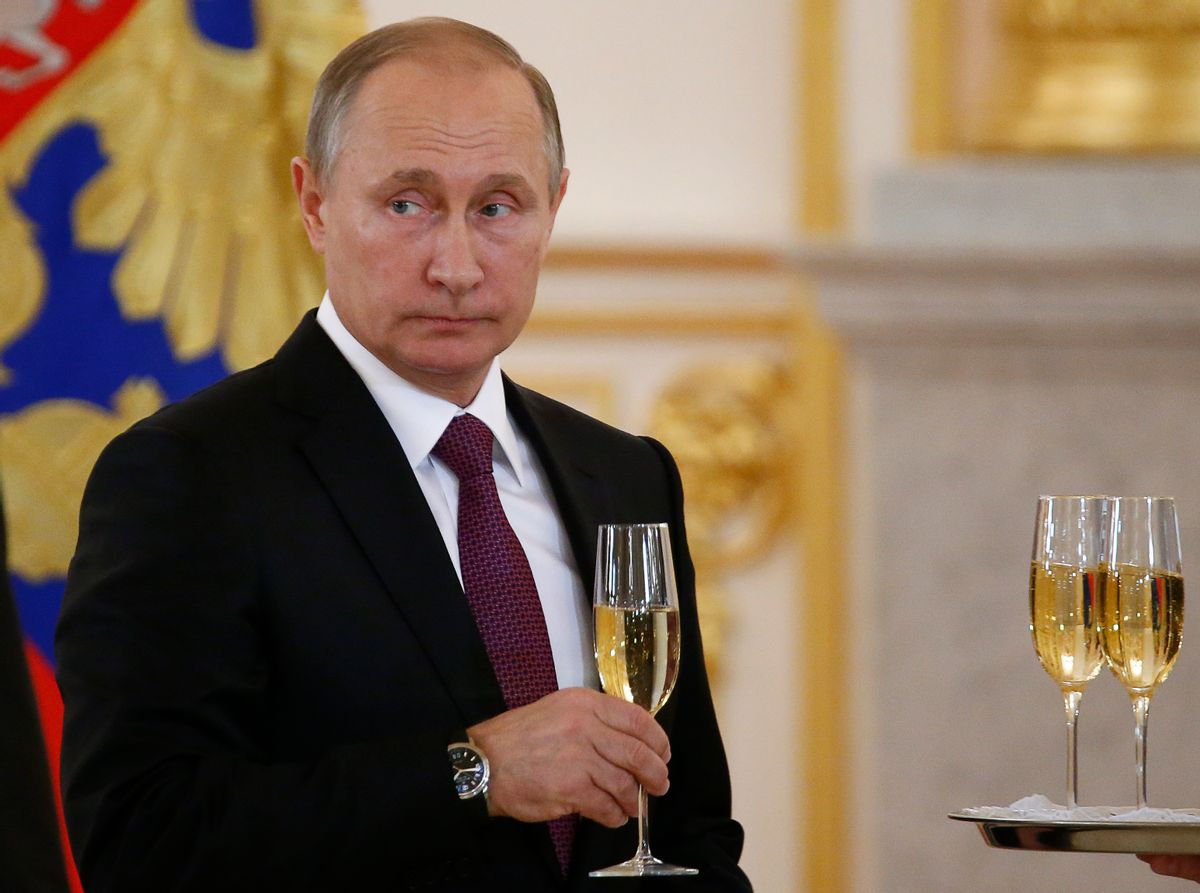 In this Nov. 9, 2016, photo, Russian President Vladimir Putin makes a toast during a ceremony for receiving diplomatic credentials from foreign ambassadors in the Kremlin in Moscow, Russia. In careful phrasing befitting the spy he once was, Vladimir Putin has made it clear he expects a great deal from President-elect Donald Trump. And, the billionaire businessman may expect a transactional relationship with Putin. (Sergei Karpukhin/Pool photo via AP) (AP)
--

MOSCOW — In careful phrasing befitting the spy he once was, Vladimir Putin has made it clear he expects a great deal from President-elect Donald Trump. And, the billionaire businessman may expect a transactional relationship with Putin.

Although the Kremlin clearly detested Hillary Clinton, Putin's public statements on Trump's victory steered clear of gloating. Other Russians were less fastidious, suggesting that Putin in private could be delighted — and perhaps harboring unreasonable expectations.

Trump's rise to the White House puts two men into seats of global power who are paradoxically both remarkably similar and wildly different.

Trump's praise of the Russian president as a strong leader, his suggestion that the US could abandon its NATO commitments and his vehement complaints about allegedly biased news media all appear to parallel Putin's view of the world.

Trump has repeatedly called for better relations with Russia, frequently musing about a rosy world in which Russia and the U.S. get along. On Wednesday, Putin did the same, hoping that the "degraded" relations between the two powers would improve once Trump takes over. Putin noted, however, that the tension "is not our fault."

The U.S. government believes Putin might have interfered in the election that resulted in Trump's victory. The intelligence community has concluded that Russia was responsible for hacking into the emails of the Democratic National Committee and Clinton campaign chairman John Podesta and gave them to WikiLeaks, which released them. Some embarrassed and damaged the Clinton campaign.

Russia, it appears, wants Trump to play the overture, and only then decide whether to applaud.

Trump made no specific mention of Russia in his first post-election comments but made clear that he wants good relations with all nations.

Putin would be most pleased if the U.S. dropped the sanctions imposed for Russia's annexation of Crimea and its involvement in the continuing war in eastern Ukraine. That could appeal to Trump's sense that he is the master of the deal.

"I believe that Trump is a practical man; he will lift sanctions on Russia that are harmful to U.S. business," Putin aide Sergei Glazyev told the state news agency ITAR Tass.

The U.S. sanctions have been a strong factor in Russia's economic decline over the past two years, along with a plunge in prices for oil, its major export.

"I don't see the U.S. dropping sanctions ahead of the Europeans ... and Europe doesn't seem to be in any mood to drop sanctions any time soon," Chris Weafer, an analyst at the Moscow-based Macro-Advisory, argued in a written commentary. He noted that U.S. presidents, even with a cooperative Congress, have less capacity than the Russian president to unilaterally impose measures.

The outgoing Obama administration signaled on Wednesday that it was not considering any change in sanctions policy to Russia.

Even if there is no short-term tactical gain for Russia, Trump's election appears to be a clear symbolic victory for the Kremlin in its resistance to pressure to establish Western-style democracy. Putin openly blamed Clinton as fomenting massive protests in Russia in 2011-2012 and Russian authorities generally bristled at the Democratic Party's emphasis on human rights and media freedom.

"Trump's approach has a better chance of succeeding, and certainly an approach that is overly loaded with morals and values does not get you anywhere with the Kremlin," Trenin told The Associated Press.