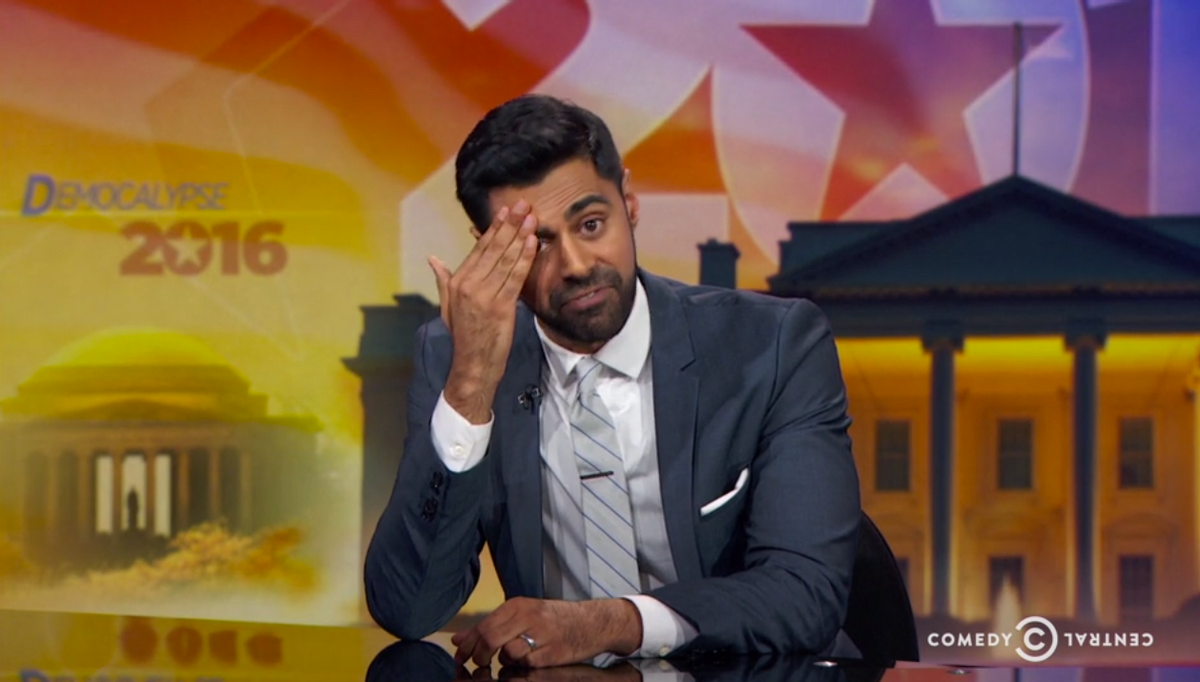 Still in shock from the election of Donald Trump that left half the nation and tears and the other half foaming at the mouth with hate speech, Hasan Minhaj talked about the legitimate fears that he has about being a Muslim citizen of the United States.

"The Daily Show" cast member was honest and open Wednesday night about the new president-elect, explaining that after what the alt-right Republican has said about deporting and banning immigrants, refugees and Muslim citizens, Trump can't take it back.

"Diet xenophobia, that's cool! Low calorie racism, mmm! Like, what?!" said Minhaj sarcastically about the possibility that Trump pivots to being moderate.

Host Trevor Noah even experienced a Freudian slip during the segment, saying "Hasan, how are you fearing—feeling right now?"

"I am panicking because melanin doesn't rub off," Minhaj responded, joking that he tried to access the Canadian immigration website that crashed on Tuesday's election night. Suicide hotlines and crisis support lines also rang off the hook with calls from LGBTQ citizens who feared a Trump's election and the widespread hatred associated with the new president-elect.

Minhaj told the crowd that his own mother, a United States citizen for 30 years, is out of the country visiting family, and fears that she won't be able to come back to America. He referenced Donald Trump's call for a Muslim ban in December 2015.

Trump has demonized the Muslim community for nearly a year.

"Donald J. Trump is calling for a total and complete shutdown of Muslims entering the United States until our country’s representatives can figure out what is going on," said a press release on Trump's website from Dec. 7, 2015.

The press release, titled, "Donald J. Trump Statement on Preventing Muslim Immigration" was reportedly removed from Trump's website after he was elected on Nov. 8.

Since December, Trump has changed his stance to "extreme vetting" of people seeking entry into the United States.

We must suspend immigration from regions linked with terrorism until a proven vetting method is in place.