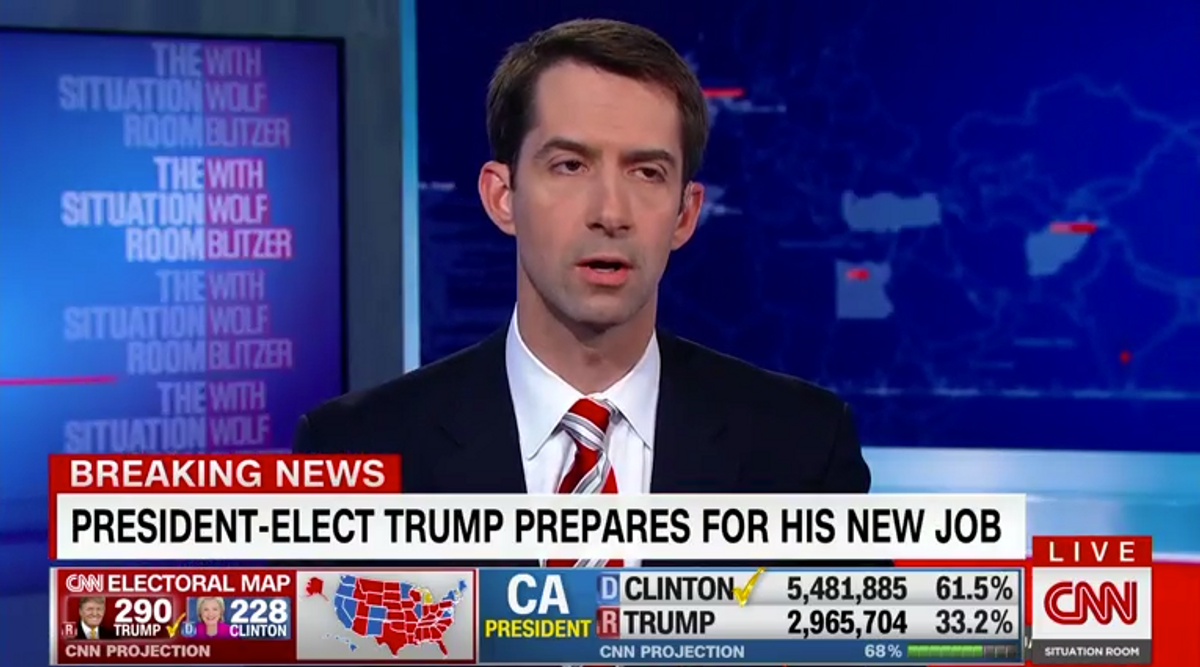 Arkansas Sen. Tom Cotton, who said that the only problem with Gitmo is "too many empty beds," now says that waterboarding is not a form of torture — and wants President Donald Trump to bring it back.

"Waterboarding isn't torture. We do waterboarding for our own soldiers in the military," Senator Tom Cotton told CNN's Wolf Blitzer Wednesday.

Blitzer corrected the senator from Arkansas, saying that the military only used waterboarding in training and that they have since stopped.

Waterboarding is an interrogation technique that mimics the feeling of drowning. The victim's limbs are first strapped down onto a board, immobilizing them. A cloth is placed over the victim's face. As they are questioned, water is poured over the cloth causing them to gag, making the person feel like they are drowning.

The law defines and prohibits torture as conduct "specifically intended to inflict severe physical or mental pain and suffering" — like waterboarding.

Donald Trump said in February that he would "absolutely" authorize waterboarding, "and something beyond waterboarding" when interrogating terrorists. Trump has often joked and implied that waterboarding is not tough enough.

"We've done it in the past, and it's something that radio DJs volunteer for. So, I don't think something people volunteer for is torture," Cotton,who is on the Armed Services Committee, said in defense of the torturous interrogation technique.

"Don't tell me it doesn't work — torture works," Trump said according to a Washington Post article. "Okay, folks? Torture — you know, half these guys [say]: 'Torture doesn't work.' Believe me, it works. Okay?" He was speaking with Rep. Bill Herbkersman, R-South Carolina, during an event in February.